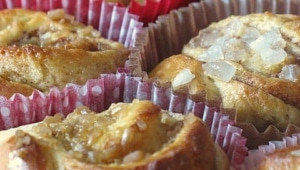 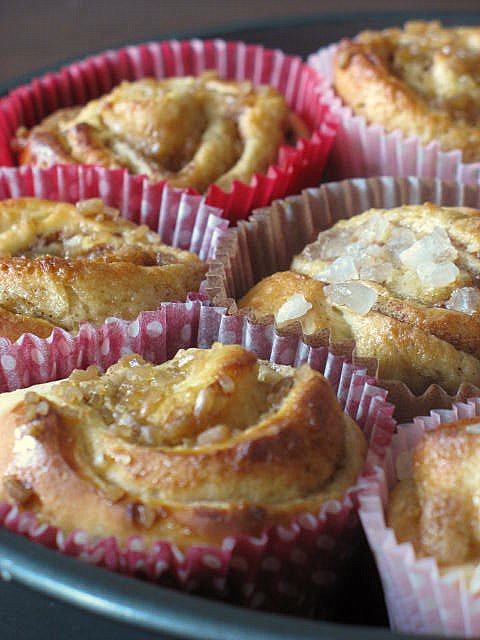 You might be thinking that Tartelette has gone off the deep end, obsessed with cinnamon rolls. Well, obsessed might be a bit big, "me likey some cinnamon rolls" although not grammatically correct would be more appropriate to label my affection for fluffy dough rolls filled with spices. First there were these, then these yummy knockoffs and now these inspired from Anne from Anne’s Food.

During our September Daring Baker challenge, she mentioned Swedish cinnamon buns and I instantly remembered the ones my mom used to make during the winter. She had been given the recipe by a Swedish friend of hers, except that Glenna called them "Bole" or something like that. I did not know any other version while growing and fell in love with them the minute my mom pulled them out of the oven. The scent of cardamom wafting through the house was powerful and magical. Cardamom and cinnamon together in the dough is one of the differences with the American type cinnamon rolls, the other one being that each roll is baked in its individual casing (shorter in Europe, I used muffin paper cups) for a shorter period of time.

Within a few hours I was sitting at the kitchen table with a roll and a cup of tea, my eyes closed…and I was back in time 15 years ago listening to my mother and grandmother talking about our Christmas dinner, the food, the table setting, the linens, the decorations, etc…I felt empty and content at the same time. As children, our games and hobby were held in the kitchen or not very far from it (except on holidays where we were outdoors all the time), and little did they know all the wonderful memories I now have of these days of leisurely baking and chatting.
Now grandma is gone and I religiously make her truffles and cake for Christmas, and mom cannot always come and visit as much as she would want (every weekend :)), but there is one thing that I will never forget to make from now on : Swedish Cardamom Buns.

Swedish Cardamom Buns, adapted from Anne whose is based on a recipe from Bara Bullar of Åsa Swanberg

In a bowl, dissolve the yeast with some of the tepid milk. Add the rest of the milk, half of the flour and the egg. Leave to proof, covered, for one hour.
Add the rest of the flour, the sugar, salt, cardamom and butter. Work into a smooth and silky dough. Here’s when you might need a bit more flour. Transfer the dough to a clean bowl, cover and leave to proof for 30 minutes. Divide the dough into two. Roll out each part to a large rectangle. Spread with butter, and sprinkle with sugar and cinnamon. Roll each rectangle into a tight roll, starting at the long edge, and cut each roll into about 10-12 pieces. Place each piece in a paper cup on a baking sheet (covered with parchment paper so you won’t end up with a mess), cover and leave to proof for 30 minutes.Beat the egg with a pinch of salt and 1/2 tsp of water, and brush this carefully on the buns. Finish by a light sprinkling of pearl sugar. Bake at 450°F for 6-8 minutes, until they’re as golden as you like them. 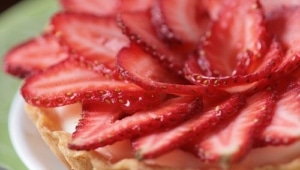 These look beautiful… WHen I was younger we had a swedish au pair and she would make something very similar to these; I remember the pearl sugar!

this is a lovely cinnamon with perfection! smells great….ah… cardoman!

What I wouldn’t do for one of these right now 🙂 I have terrible luck with yeast dough, but these don’t sound complicated, so will give it a try!

MMMMMmmm….I likey me some cinnamon buns too…or more precisely, cardamom buns. There is something really special about the smell of cardamon baking. I’m going to have to try this one!

Every time I think I’m over my cinnamon roll craving you go and make more of them and bring it right back!

Ah Tartelette how do you make the simple into just incredible! The cup cake papers for a cinnamon roll, so obvious and yet so brilliant!
I don’t remember my grandmother or mother making cinnamon rolls but I do remember all the cooking that went on in grandmother’s kitchen and the three rooms that connected off of that kitchen. Empty & content, a perfect & concise phrase for just my feeling.

I love the description of you enjoying one of these Swedish Cinnamon Buns, envisioning your mother and grandmother discussing Christmas dinner plans and such – so vivid!! These buns are certainly a delightful, delicious way to cherish fond memories :0)

You know, I would be okay with it if you were obsessed with cinnamon rolls … I love the muffin cup idea, very cute!

As Aase said, you are remembering "boller", the plural of "ball" or "bun". A pretty general term – as what I know as "boller" are the Danish sweet yeasty raisin buns with no spices.

Your blog is lovely, by the way – I’ve been following it for over a year now. Keep up the gorgeous baking!

Oh boy Helen, I’m with you! "Me Likey Cinnamon Rolls, too!" Those look wonderful and perfect for the holiday season!!

You are remembering the word "bulle" (The "boller" mentioned in other comments is not swedish but some other scandinavian language). "Bulle" refers to one bun, the plural is "bullar" as in the title of the booke Anne has adapted the recipe from. Whatever you call them, they are indeed lovely. In Sweden we have "kanelbullens dag" (Day of the cinnamon bun) on October 4th. I don’t know if this is unique or if some other country pays tribute to the bun or some other baked goods on a special day?

Well you can never get enough cinnamon buns period. These ones look wonderful.

I would do some serious damage to these buns…yum!

I remember seeing these on Anne’s site and saving the recipe. Thanks for reminding me about them! They look delicious.

Helen, I want to bake these, too!
My holiday baking list is getting too big! 🙂

Hahahaha, "Me likey some cinnamon rolls." Well, me likey too! These look fantastic and remind me of a bread I’ve made before called a Finnish Pulla (which I plan to make again soon!).

Thank you all for giving me the right term. "boller" makes a lot of sense because in French we would not pronounce the "r" and make more of a "eh" sound.I need to email mom and get her recipe asap!

Now this I can see myself eating without too much guilt. I think the hubby would eat this too since it does not have the frosting and the sticky sweetness of the other types of cinnamon buns.

What a lovely tribute to your mom and Grandma! I can almost hear them in your kitchen too 🙂
These look fantastic.

these look so good! absolutely beautiful 🙂

I make these rolls alot. Here in Norway we call them kanelsnurrer.

Can I get a gorgeous Swedish man to go with these gorgeous buns?!

My goodness, who wouldn’t be obsessed with those cinnamon buns?! Beautiful!

My Swedish housemate makes these and is always going on about pearl sugar. Noone here had ever heard of it. Does anyone know if there is a supplier in Southern England?
They are delicious by the way 🙂

These look beautiful!! I was quite disappointed when I went to IKEA for the first time and tried their cinnamon rolls – I was hoping for an authentic Swedish cinnamon roll, but just got a plain American one. I guess I’ll have to make them myself!

I just finished making my first batch of Bullar – wish I would’ve seen this first! I like the muffin cup method much better than the weird knot-twisty things I tried to make.
Just snatched two little ones off the baking sheet and they are YUM! A Christmas Miracle!

My husband’s grandparents were from the Mariehammen alands between Sweden and Finland. He always talked about his grandmother’s Bakka Bolle ( Baked Rolls in Swedish). I finally found the recipe on your site after looking for it for 14 years! Thank you so much. When I saw the word bolle I knew I had found it. Thanks again for the recipe. My husband will be so thrilled to be able to taste these wonderful rolls again.
Mrs. Hultgren

i have this page bookmarked!

i made them for my swedish class and my teacher was very impressed! 😉

amazing recipe! thanks for posting!

I used a dough similar to this to make a Swedish Tea Ring a few months ago and loved it. What a great idea to make small cinnamon rolls out of it! And great memories attached as well. That is one of the best parts of the holidays.