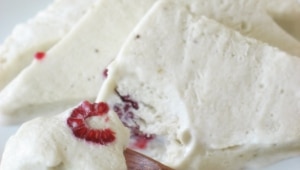 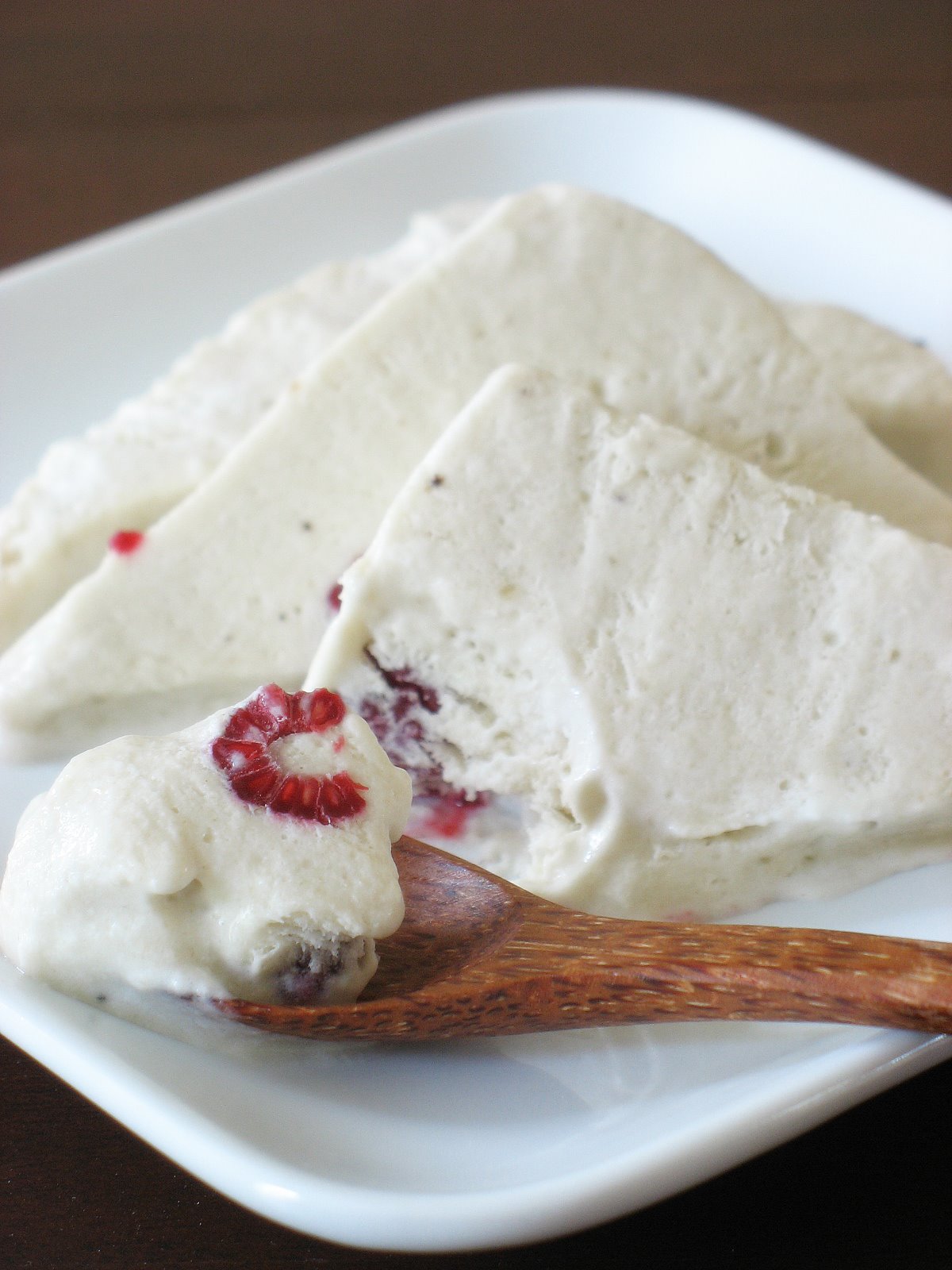 When I got off the plane yesterday, I felt I was wilting on the spot. I had easily forgotten that with heat comes high humidity here in Charleston. I kid you not, my pants were wrinkle free in no time flat and my energy level sucked out of my body. I had not realized how my long weekend away had left me somewhat tired and I ended sleeping most of the time on the airplane, and that meant I was wide awake at midnight. I started looking around the kitchen, wanting to bake something to calm me down (works as good as drinking hot milk sometimes). Five days without his mate and B. had left quite a few bananas to go past their prime. I thought about muffins, scones or cake for breakfast the next day but that meant turning the oven on and oh..did I mention how hot and humid it was? Yes, bad idea…That’s how I ended up making a frozen parfait, on the complete opposite end of the spectrum!

I am a summer gal for the produce but a winter/fall one in regards to the weather, so I can’t help but stock on fresh with berries, peaches, nectarines, plums, watermelon, you name it. However, I like to keep me some naners (bananas) around for substance. I am constantly filling that fruit basket so much so that my produce guy said he thought I moved or left to see greener pastures when he did not see me these past few days. What can I say? “Hi, my name is Tartelette and I am addicted to fresh produce…what’s up doc?!”

I feel sleep deprivation is calling my name, so without further ado, here is the recipe: 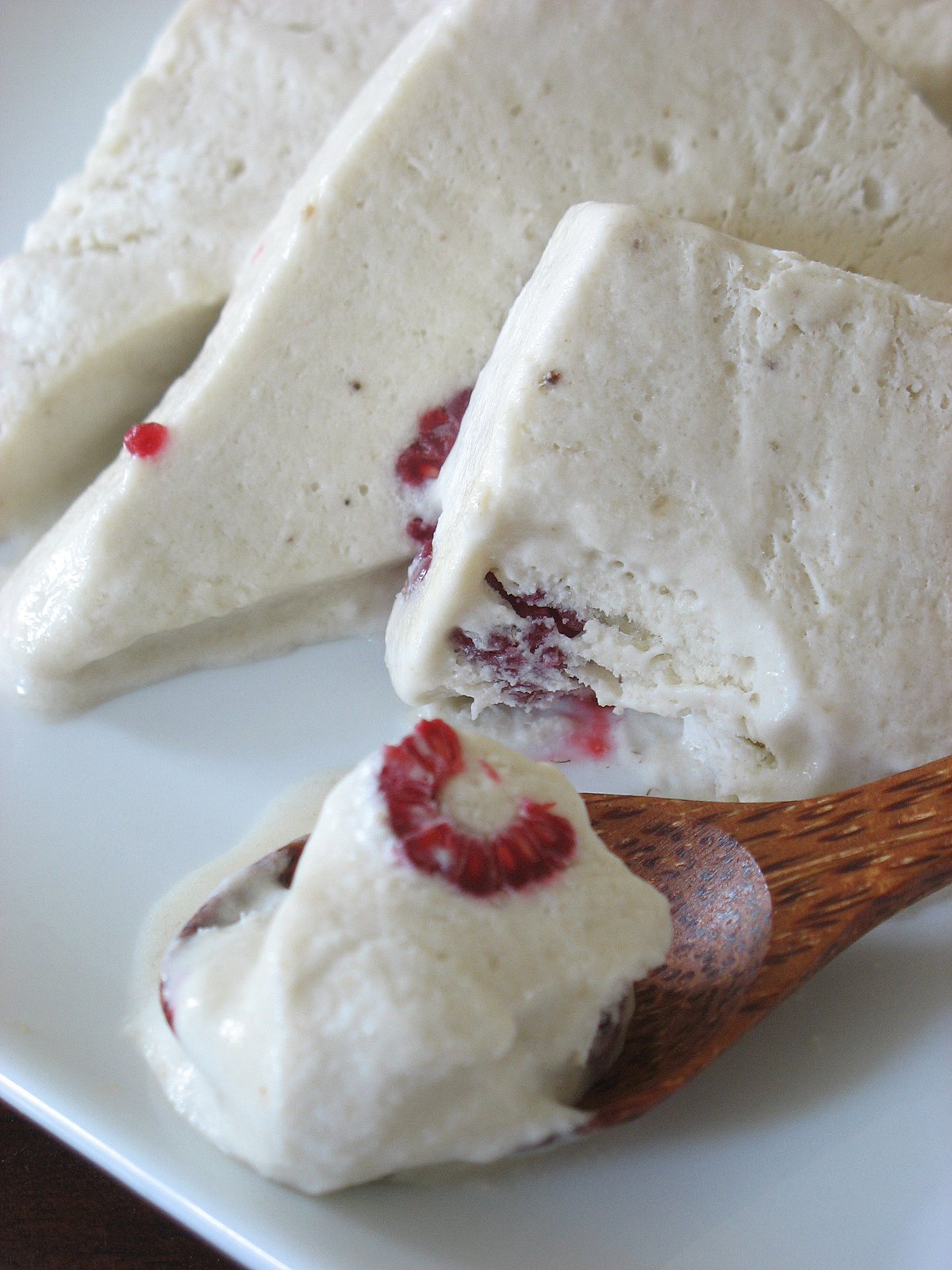 Honeysuckle And Jasmine Cupcakes & The Little Gifts In Life 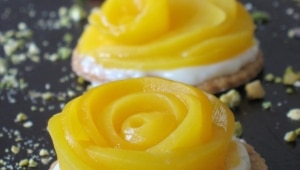 It is so hot here in NYC as well – it is refreshing just looking at your frozen parfaits! I wish I had some in my freezer now!!

News flash, I am melting here in the PNW…there is no escaping it!
I made something froxen as well. I am attempting to photograph it tomorrow in 94F weather…can you say soup!
You parfaits look nice and cool.

It was the opposite for me over the weekend. But like they say "The coldest winter I spent was a summer in San Francisco". Can’t wait to see pics of your adventures w/ Lis!

Thanks so much for the recipe Helene! Perfect for me with no ice-cream machine required!!

I suppose frozen parfaits don’t ship to Canada too well, do they?

It was about 95 here, yesterday. (I’m not that far away from you, however.)

I’ll be in Charleston for a college roommate’s wedding at the end of August – oy. She has lived there several years and I always try to avoid visiting between May and September! She’s got me this year, though, with the nuptials and all.

I hope she serves some of those pretty little parfaits at the reception. (Outside on a boat. Did I already say oy?)

I’m waiting for summer to arrive in France. This is a great treat to have for a nice warm day. 🙂

Wow – I could really go for this right now. It has been right around 100 degrees here for the last few weeks – but I guess at least we don’t have the humidity.

How very fun . . . there’s a little different lilt to your voice . . . I think I’m hearing echos of you and Lis in a kitchen.
I am going through the raspberries, strawberries, blackberries, watermelon, any melon, blueberries, well all of that at least as fast as the temp is rising everyday. Rain everyday! and then the sun shines. I think I’ve ended up in the tropics. I melt.
The parfait looks amazing and so cool. I guess like Brilynn, it wouldn’t make it to Dallas intact . . . have to make my own.

So now you place banana AND raspberry together, sweetie? Not fair to me. 😉

It is inappropriate to just tell you that I love you. These slices of cold beauty are just what I need in the 90 degree weather here today.

what is mascarpone? I know to you I probably sound stupid, but I am expanding me culinary horizons. And have come across the word before yet I don’t know how it looks or tastes; or if it is a fruit, veggie, or herb. Please enlighten me!

Very beautifully presented blog! And terrific recipes too! I dream of being a better baker, I’m sure I just need more practice. Although the easy things like cheesecake and creme brulee draw raves from clients, pastry intimidates me.

That looks delicious, and I am about to go make some..

That looks SO GOOD! I am going to attempt ice cream with the tips you gave me – expect a frantic phone call. 😛

Love the combo of flavors Mmmm! And FANTASTIC SPOONS!!!! hehehe

That sounds fabulous (summer has finally arrived in Seattle!). Marscapone and bananas and berries – yum!

I wish you had the "Banana raspberry frozen parfait" in a take away or eat.Don’t forget to call it "blog of note restaurant or take-away"What else can i say when i see far more than the normal eyes can see.

that looks so good right now.

I don’t care HOW cold it is here in Australia, I am now on a mission to make some parfaits!

So creamy, so delicious, I am licking my spoon (lol)

What a great way to beat the heat! I’m so happy that you had a great time with Lis!!!

Brilliant combo – banana and raspberries. I really like the idea of the mascarpone too. I’d not quite hot here at the moment but I hear over the weekend we’ll be hitting the 35 C mark. So I think I can give this a try!

I love the idea of a parfait that isn’t layers stuffed into a glass. And anything this cool and refreshing really jumps out at me this week — could it be any more hot and humid???

Looks absolutely delicious, as always (I’ve got 3 speckled bananas languishing in the kitchen, so might give this one a try). Instead of sending some parfait, can you send me some of your summer heat please Helene? I can’t even remember what summer feels like. All I see outside is grey skies…

Oh Helene, I think humidity is contagious! We are living in a sticky, muggy mess up here! Your parfaits are the perfect thing to combat the thick and heavy air… Now if I can just peel myself off of my chair to make it! LOL.

My mouth is watering just reading your posts. Excellent word choice, excellent pictures of savory foods, just excellent all around.

It’s winter where I am but it looks so good I’d still eat it anyway.

Hot here in the Northwest, too. I can seem to make nothing but frozen desserts. I love the picture of you in your kitchen at midnight whirring the blender, making this delightful treat. It looks beautiful and refreshing.

It is hot in Utah too so I have been making ice cream for the past two weeks…toasted coconut, lemon sherbert, and apricot almond…now I need to try this!! Eating ice cream is the only way to cool off:)

How do you get such beautiful photographs? This site is gorgeous!

I love banana ice cream! I’m filing this away to make later this month.

Looks so soft, so smooth and so white… just like satin silk.

Looks delish… do you think I could do cream cheese or some other sub for the marscapone?

A: you could do cream cheese for sure. I did it with ricotta too, but the texture is slightly grainy with it.

mmmmmm, my mouth is watering. the recipes look delicious

I am seriously glad that I’m not dealing with the heat you are talking about. It stays about 75 lovely degrees here. Ahh…The parfaits look yummy!