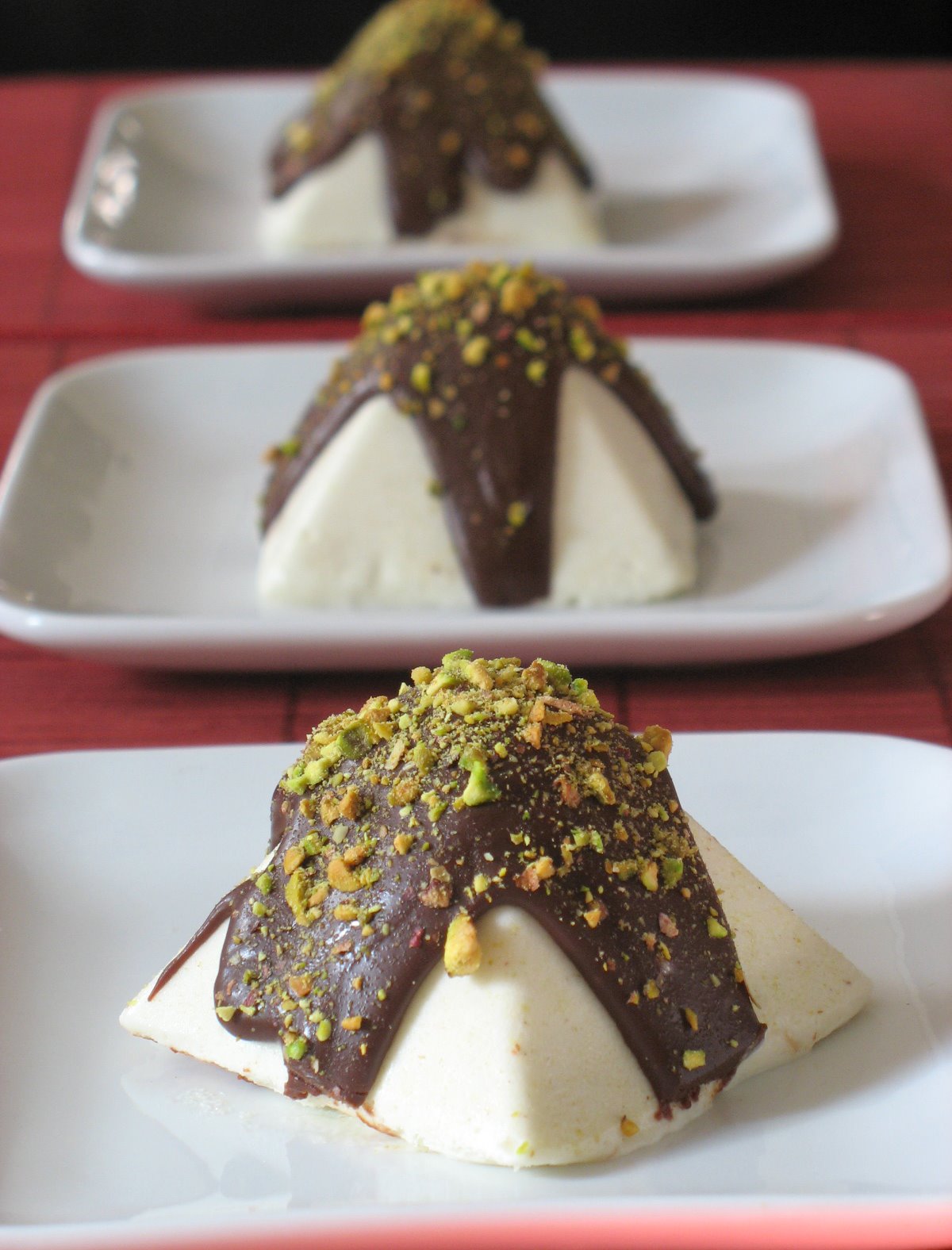 First of all, I would like to thank all of you for wishing me a Happy Birthday (32 for the curious). You sure know how to make a girl feel special!

Late wednesday night I was cleaning the kitchen after an afternoon of baking and macaron making when I gave a serious look into the fruit bowl: the bananas I had bought two days earlier were already having a mini meltdown. It is quite amazing how fruits wilt faster than you can use it over here. At first, I thought of the usual: banana tartelettes, bread puddings, muffins, cakes, breakfast treats…
It was hot you see, so I went for a cold treat instead and I am glad I did. I was tempted to make ice cream but changed my mind for something a little bit more elaborate when I learned we might have company on thursday night. Our dinner party did not take place but I was able to serve this to B. and the neighbors tonight while playing cards.

These parfaits were adapted from my other Sugar Daddy, Richard Leach. I have been mesmerized by his creativity, techniques and use of seasonal produce. His book might seem daunting at first but there is not one recipe that did not turn out delicious and even if one dish is made out of 4-5 elements you can definitely make them separately, like I did with these Banana Parfaits. I made the original recipe (post later this week) then had enough leftover parfait batter to make individual servings without guilding the lillies like he did (nothing wrong with that but I have more than one job and less than one day to do them all!).

To assemble: Unmold the banana parfaits and drizzle the chocolate ganache on top, sprinkle with pistachios if desired. 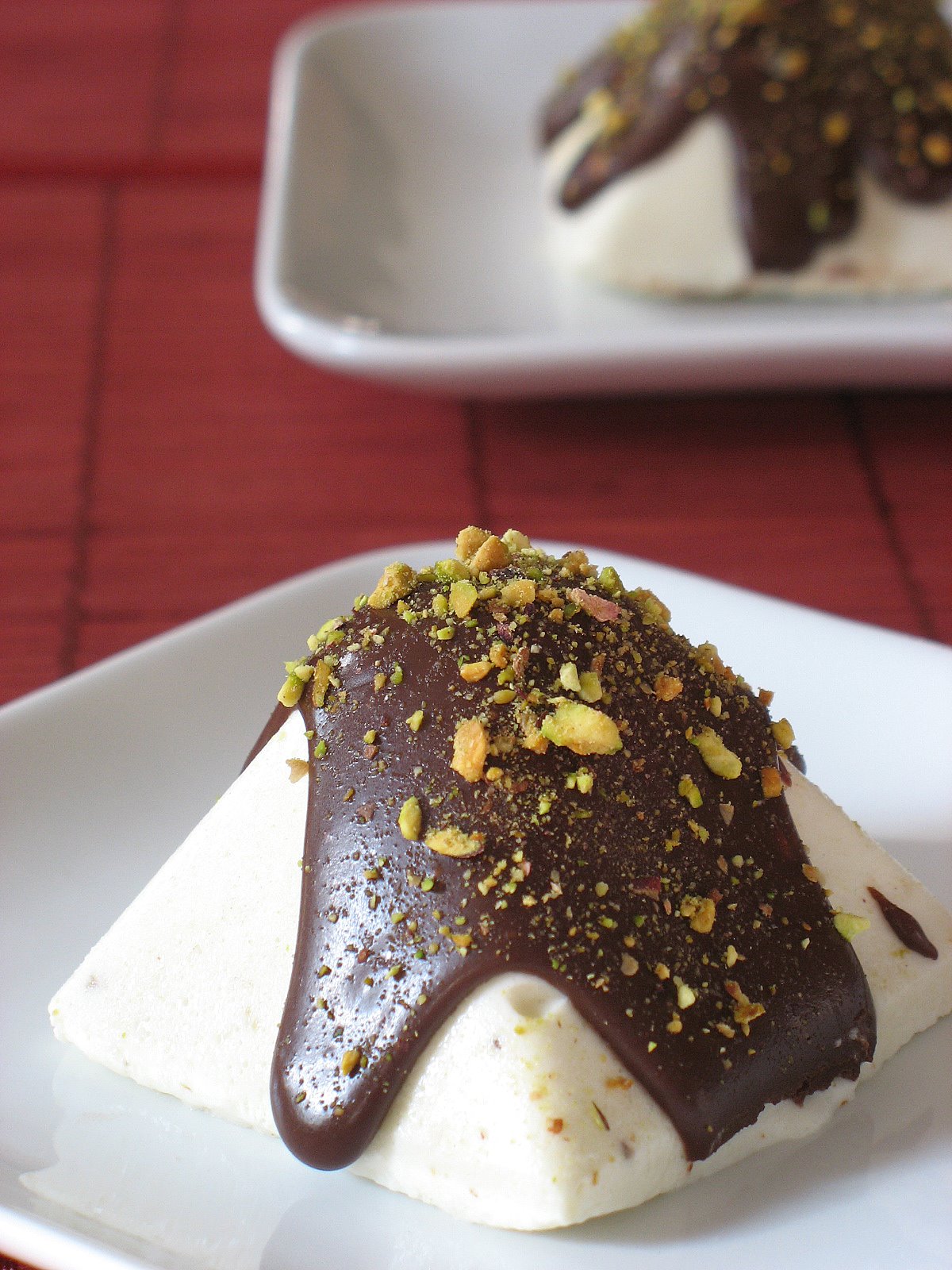 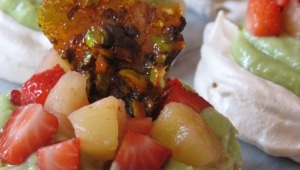 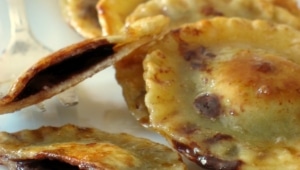 Waiter, There Is Something In My Nutella Ravioli…!

I didn’t konw what a parfait was, this since today 😉
Your parfaits seems to be delicious!

Okay… where do I get the pyramid molds? These are visual *and* an edible delight!

Oh yummy yummy. These really do look great. I bought mascarpone yesterday too but I am using it for something else – I have to use up some puff pastry I made 😉
Coming back to your dessert I just love the simplicity of making these and the huge effect it has when it is finished. Great idea!

Helen, can I be your neighbor 😀
These parfaits are simply elegant!

I keep asking you this but… when are you going to come to Australia??? I need some of your skills to rub off on me!
This is gorgeous as always Helen.

Delicious! You do like bananas don’t you? These little mouthfuls look wonderful!

Helen, the your presentation in this photo is incredible. Plating the first one on a diagonal was a perfect touch… why can’t I think of stuff like that!

I love the flavor combination on this one. I would love to try it.

You are the banana master, sweetie! 🙂

Helene, I’m not saying anything new here, but everything you make looks fantastic and I’m sure it tastes magnificent too. But I’m stunned by the triangular shapes!

Oh geeeez! These are so pretty Helene!! I love bananas & the more you write about your banana recipes, the more I’m hooked to them! Now, I wish I lived nearby your house so I could pop in & ask for a treat:P

I am always amazed at how creative you are in using up ingredients in your kitchen – and how beautifully they come out! bravo!

How perfect! I need to use some of my molds for something. What a great idea — and more bananas and chocolate — Yum…

I would want these every night after a long hard day at work. It’s like a little creamy dreamy gift!

Hi, just wanna let you know I think you have a fabulous blog. And there’s so many recipes I can’t wait to try on your blog.

You’re killin me.. you are simply killing me. *sob*

But I still love you.

I like chocolate and banana, and this looks great! I love your pyramid moulds too, really dramatic 🙂

What fun those pyramid molds are!!! Well, you know what a fan of mascarpone I am so this has to be good!

What an elegant parfait! Well done.

Your parfaits are perfect! (Pardon the pun.)

They’re like perfect pyramids of creamy bliss. I want to live on one of them!

You either stay awake all night thinking about making food or you go to sleep and dream in recipes! Beautiful! You had a flood of Happy Birthdays!!

What a beautiful dessert for a dinner party – what I like the most about it is that you don’t even have to have an ice cream maker.

those look absolutely delectable Helen! The only parfait recipes I’ve seen so far all include masses of gelatine, which I’m not very fond of, but this certainly sounds like an attractive alternative.

They look gorgeous Helen. I’ll come for the card game too, if you’re serving this delicious dessert. 😉

They look absolutely delish!! My mouth is watering just thinking about them!!

ohhhh tartlette you are so cruel! these are stunning! i cant think of much more delicious thing right now than banana mascarpone mousse – seriously!!

Another amazing dessert! I bow to you!…:)

You must have pyramid molds to make those cute parfaits. Bannana and marscapone sounds decadent, then top with chocolate…wonderful!

Hi Helen, is there any reason why u use a whisk to make the glaze? I learnt that by using the whisk there’d be more air bubbles in it.

The pyramid molds are silicon ones purchased online moons gao.
Swee: I like using a whisk and I don’t find it had too much air if you whisk gently but you could use a spatula as well.

Was just looking for something to do with leftover mascarpone and this looks just perfect. Thanks!

Merci pour cette recette de parfait Miss Tartelette!
I am adding your blog to my bookmarks!