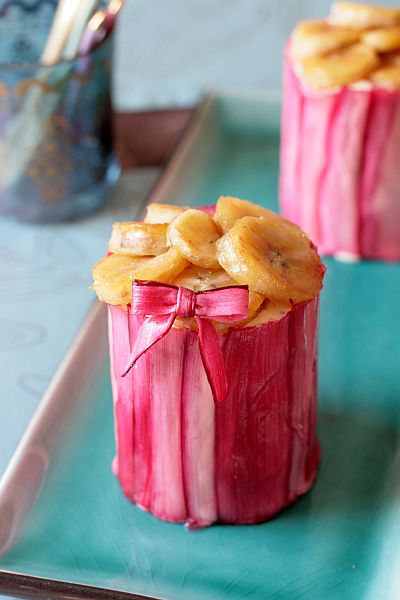 What follows is a typical conversation you can hear at our house on a Sunday afternoon:
Me: Hey, what’cha got planned today?
Him: well, I found this electric saw (or drill, or vacuum,….) in the street and I thought I’d fix it up. You?
Me: I just picked some stuff up at the grocery store and I’d thought I’d play around a little.
Both at the same time: well, call me before you burn the house down!

We had a very similar conversation last week but this time I was on a mission. I was standing in the middle of the fruits and vegetables stands, starring at gorgeous stalks of deep red rhubarb when my friend S. called. “Remember my bridal shower next July?” Yesssssss….(can’t you just tell what’s coming?!) “Change of plans…it’s in two weeks otherwise I’ll have to throw a baby shower with it!” Yesssss “Can you think of something pretty, girlie, decadent, pink, red, white….?” Yesssss…I love S., she is the exact opposite of me in almost everything and in that regard she is the ultimate girlie girl, ultra pink and fuchsia, which makes me look like a Gothic tomboy (and if you know me, you know I am not which gives you a pretty good image of S.) Good thing I was holding pretty red rhubarb when she called and that she happens to love it too.
So here I was, back in the kitchen letting my brain do its usual selection of all the wild ideas running through my mind. A charlotte is always a pretty thing and since the weather has been very clement and her shower would be an intimate affair (12 ladies), I thought about a chilled/frozen filling. Bananas are one of my favorite ingredients for frozen mousses because they provide good body and sweetness without being too heavy. When cut in long strips and prepared just a bit, the rhubarb graciously replaces the traditional ladyfinger casing of a charlotte. While the leaves are toxic, the stalks can be used to your heart’s contents but they need a good dose of sugar as they are very tart and make cranberries look weak in that department.

When working with cold or frozen individual plated desserts you can use metal pastry rings but since they are not cheap and I tend to accumulate mini pans of all shapes and sizes I rely on a big stock of different pvc pipes. Yep, hardware stores are a cook’s treasure land sometimes! For a minimal fee you can select all the diameters you like and if you smile big enough (maybe throw in a little eyelash action for good measure) they might even cut the pipe for you. Since the pipe is almost indestructible, I am not worried about storage, bending or rust. To make sure the “rhubarb ladyfingers” would not stick to the plastic mold, I just lined them with parchment paper that I secured with tape. The rhubarb is cut in paper thin slices and barely softened in a low temperature oven for 10 minutes, to retain the color without caramelizing them. Once filled and frozen, the charlottes popped right out and all I had to do was to carefully peel the paper.

After the stalks, I chopped up the remaining tidbits, cooked them down with some sugar until I had a deep red puree and just stared at it mesmerized. Just kidding! Although I just wanted to spread that delicious jam on fresh toast, I thinned it down a bit and used for the plating along with some of the frozen banana filling. I topped each charlotte with caramelized banana slices and a little rhubarb bow with strips cut in the soft slices. as a homage to S’s girlie-ness. She came over that night for dinner and loved it, from the presentation to the taste…Ouf! (that’s French for “big sigh of relief!)….Now I have got the think about that baby shower of hers!! 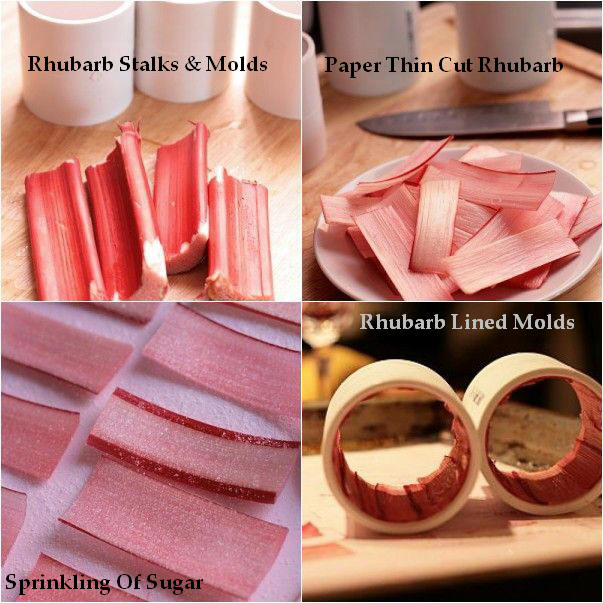 Serves 4. The molds used are 3 inches tall and 3 inches across.

For the Rhubarb “ladyfingers”:
12 to 15 rhubarb stalks, cleaned and cut to measure 3 inches
1/4 cup sugar

Preheat your oven to 200F. With a sharp knife and without peeling the stalks, cut them into thin slices (1/8inch thick). Keep the ends and trimmings for later. Set them onto parchment paper lined baking sheets (or silicone ones), and sprinkle with the sugar. Bake for 10 minutes. Remove from the oven and let them cool completely.
Cut strips of parchment paper to fit inside the molds and carefully line the inside of the mold with the sliced rhubarb easier to do if you lay the mold on its side). Place the rings in the freezer for a couple of hours.

In the bowl of an electric mixer, whisk the egg yolks with 1/4 cup of sugar until pale and fluffy. Fold the banana puree into the yolk mixture. Whisk the egg whites until they foam and add the remaining 1/4 cup of sugar, 1 Tb. at a time and continue to whip until glossy. Fold the whites into the banana mixture. Whip the cream to soft peaks and add to the banana batter. Keep about 1/4 cup of the mousse to use as a sauce for plating if desired. Spoon the mousse into the rhubarb lined rings and freeze overnight.

Caramelized Banana Slices:
Cut 2 bananas into thin slices. In a pan, melt 4 Tb sugar with 4 TB butter, and cook until the sugar is melted. Add the bananas and cook them until barely soft. Remove them from the pan and let cool. It is preferable to do these the day you plate up the whole dessert.

Options for plating:
Cook down the bits and pieces of rhubarb you have left from cutting the slices with some sugar (to taste) until soft and jam-like and let it cool completely. If it becomes too thick the next day, thin it down with a bit of water to use it as a sauce.

To Serve:
Carefully unmold the charlottes from the rings by pushing down gently from one end, peel off the parchment paper. Quickly set the room temperature banana slices on top, use some of the rhubarb jam and leftover mousse for sauces. Make a bow if you have it you (which I know you do since you all wrap presents so well) I got to tell you that was a rather sticky experience!!
You might have leftover mousse when you fill the rings. I just layered it with some cooked rhubarb and pop these in the freezer for an easy weeknight dessert. 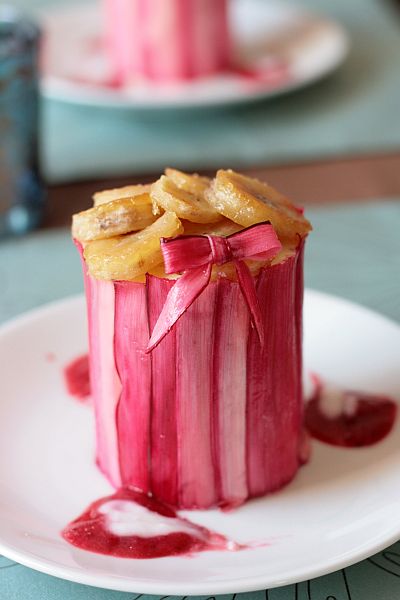