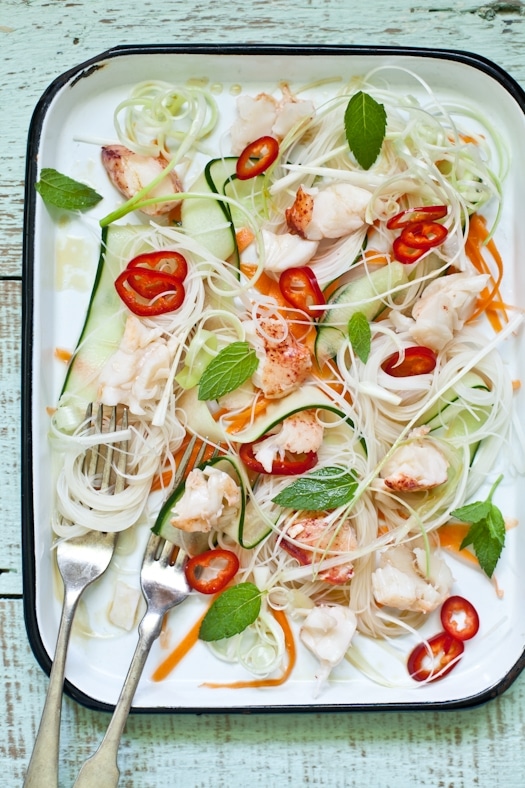 The last few weeks have been somewhat of a blur. A good blur. I wrapped up the shoot of the new Lodge Cast Iron book that should hit the shelves this Fall. Got to shoot the most amazing food for a Cooking Light book for 2014 and just started shooting a really hip and fun cookbook for Southern Living. Long days, gorgeous foods, awesome team and an empty brain at the end of the day are the perfect recipe to prevent me from being productive on the blog, ahah!

A little hibernation took place also. You see, after 8 months living in different cities, my husband finally brought the last load of his boxes and officially moved in a couple of weeks ago. And well, after months apart, albeit with a few visits here and there when our schedules permitted, I chose to spend time away from this page and fill it with "us" instead. We had plenty of things to do around Birmingham together that we had put on hold while we were apart. Our evenings were spent cooking dinner, having a glass of wine on the back deck and talking. Weekends were filled with short outings or longer road trips to discover our new state. 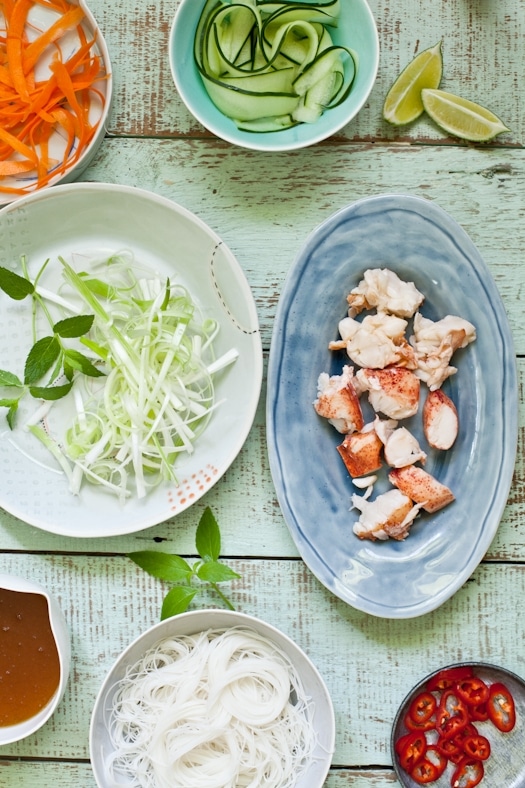 And then there was our 15th anniversary. Neither of us could believe it. Not that we were surprised we had been together this long. No, just the simple notion that it really does not feel like 15 years. We remember each year as if it had just happened. And the realization that, with these 15 years, our couple is all sorts of thing. Strange, hard to comprehend at times and for others, awesome, rocking. Serious, funny, unbalanced, observant. Quiet, musical, sonorous. Certainly not dull, conventional or lacking stories. A solid, rocking fifteen years of fun, struggles, and lots and love of love and communication to season it all.

We had a big party with our new friends, neighbors and old ones who made the drive to come celebrate with us. Kids running around, dogs chasing each other and adults taking part in a lovely evening of sangria and grilling on the back deck. We are very much looking forward to the next 15 years together with the people we love and the friends we make. 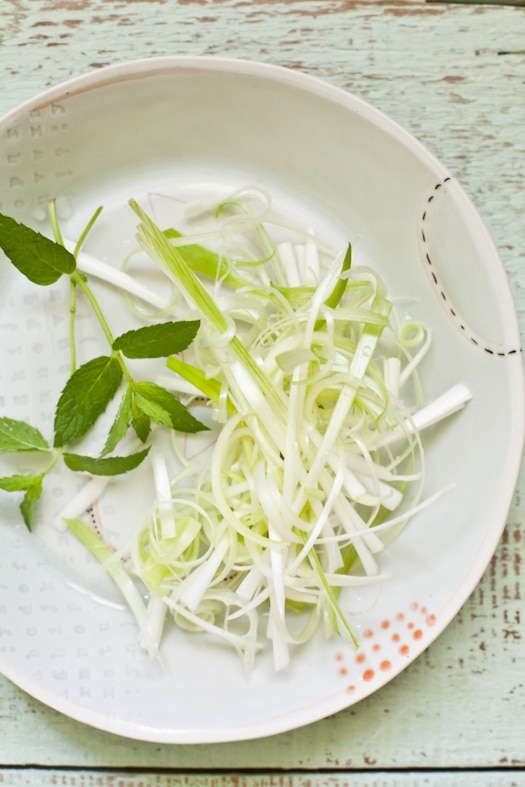 In between going out to new restaurants, pubs, events and hanging with friends for dinner, we both felt like a little clean-er or/and simpler eating was in order. Peaches made their appearance on many salads and were devoured au naturel or grilled for dessert. Tomatoes were sliced, cut, chopped and dressed in many various ways to steal the show of our dinners. And then there was these whole two giant lobsters left from a photo shoot that I had picked over and frozen with the hope of creating the perfect recipes for the sweet tender flesh of the lobster.

I settled on a super fresh salad with an Asian flair: big chunks of perfectly steamed lobster with ribbons of cucumbers and carrots and long threads of rice noodles, lots of mint, lime and chili for a little kick. The second recipe I wanted to try for the lobster was a grilled lobster pizza with plenty of spinach, feta, Vidalia onion. Since the lobster was already steamed, grilling the pizza dough and then layering the ingredients at the last minute on the crust kept the lobster meat tender and juicy. Paired with a little herb salad and a cold beverage and we had all the making to a lovely meal a deux. 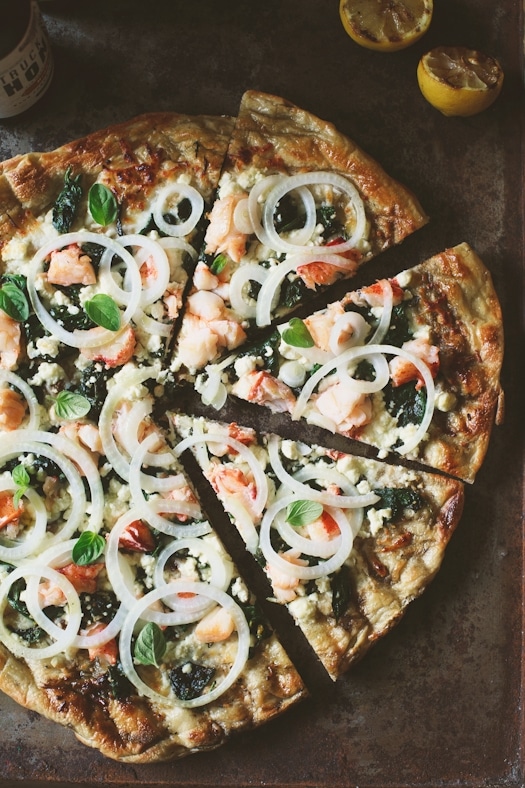 1 cucumber, peeled into large
ribbon with a vegetable peeler

mint (as little or as much as you
like)

Prepare noodles according to package directions. Drain and let
cool to room temperature. Combine noodles, lobster, carrots, green onion, and cucumber
in a large bowl and toss well. Sprinkle with the sliced chili and mint. Drizzle
with the dressing as little or as much as you want and eat!

In a small bowl, whisk all the ingredients together and drizzle over the salad.

Serves 2 to 4 (depending on the size of your appetite…!)

1/2 batch of my favorite pizza dough from 101 Cookbooks, here (make the 1/2 batch then save half the dough in the freezer for up to 3 month) if not gluten free

zest of one lemon

When the dough is ready to be rolled out. Roll it out to a 9
or 10-inch circle on a well flour dusted surface. Place it on an inverted
baking sheet dusted with a little flour too. Set aside, covered with a sheet of
plastic wrap until ready to use.

Heat the oil in a large pan over medium high heat. Add the
garlic, lemon zest and spinach and cook until the spinach is just wilted, about
3-4 minutes.

Heat a barbecue to medium heat. Brush the pizza base with
oil and cook for 3 minutes. Turn, layer it with the spinach mixture, feta,
lobster and onion. Cook for another 3-5 minutes. Remove from the barbecue, sprinkle
with lemon juice and serve.

They both look delicious. Clean and healthy too.

I love all these recipes!! I just bought some lobster and cannot wait to make these! YUM!
Oh and congrats on 15 years. That is awesome!

I feel like eating that pizza right now and it's only breakfast time. I'll put it in my to do list.

Hi Helene,
I am interested to knnow if this pizza dough is something you eat, or do you make a gluten free version for yourself?
Beautiful photos and post once again. Thank you,
Nat

Wow I love both these. The lobster Pizza is a new one to me and as for the rice noodle salad, what could be more perfect for a hot summers day

Congratulations! It sounds like you had an amazing celebration. Gorgeous pictures, as usual.

Congratulations on your 15 years together. I am lucky enough to be celebrating my 20th with my beloved this year. As you say, it doesn't seem that long. I supposed that happens when there is mutual love and respect for each other. I look forward your postings whenever you have the time for them.

Nathalie: you can use the gluten free recipe I provided for the pizza dough also.

congratulations on your anniversary! that lobster pizza looks absolutely perfect…

What a sexy salad!

I've been wanting to try a grilled pizza for quite awhile. The idea of pizza with lobster sounds so decadent and yet simple. Such a great pairing.

Seem that you have very busy moment lately. Congratulate to your 15 years anniversary. I love the salad recipe very much, and thinking to try cellophane noodles in it and serve chilled, should be really good.:)

What a treat to eat Lobster like this. Ah, summer

Congratulations on 15 years together–here's to 15 more, and 15 more after that, and…

Every photo you take is a work of art!

Yum, this pizza looks amazing. Is there a better combination than feta and spinach?

The lobster pizza looks amazing. I love lobster and am always looking for ways to eat it. Yum.

Happy Anniversary! My husband and I have been married 29 yrs this Aug. and I can tell you that it just gets better! 10 children and 29 yrs later, I love him more than when we married!

😉 mmmmm will try as soon as possible!

You are seriously making me too hungry right now…I shouldn't be reading this on a juice cleanse!

The salad looks amazing. That would go well with some ice cold white wine on a hot summer's day.

lovely contrasting colours. I like the fact there aren't too many ingredients to cloud the taste of the lobster.. looks elegant