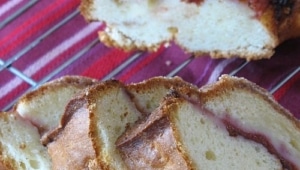 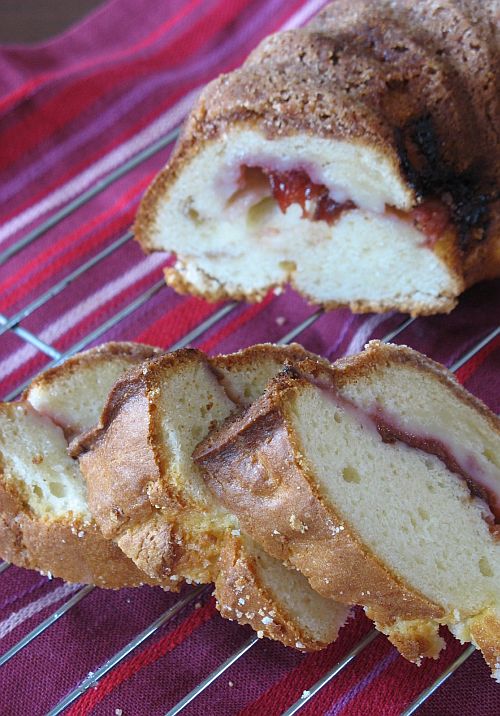 Not to worry, this cake is only a mouthful in its pronounciation as it is actually neither dense nor dry, even after a few days parked in your fridge. I made it on friday morning before work and we left for the weekend (and a bad sunburn made me turn as red as a Strawberry Mirror Cake)to enjoy some alone time before my parents get here. When we got back tonight and wanted something to snack on after dinner, I pulled it out of the refrigerator and it was just as good as the first day.

I have a bad weakness for coffee cake and I am always on the lookout for a good recipe. I see one I like just about everyday but when Belinda from What’s Cooking in a Southern Kitchen posted this one, my tastebuds got excited again. I wanted to use one of the 9 jars of Plum-Meyer Lemon jam I had made after the Ricotta Cake instead and beside keeping the proportions of solid to liquid the same, I departed from the recipe and made it my own according to what I had in the fridge. Coffee cakes are like good friends: strong and familiar, present and comforting.

You could use any combination of jam or marmelade that you want, but Sunny my market man gave me five pounds of Italian plums for only four dollars the other day and they got fast chopped up for jam! Since I wanted to use my Meyer lemons to their full capacity I kept the rinds of the ones used in the lemon curd for the ricotta cake and infused the jam with them. The flavor of the plum is now out of this world! For the topping I added finely ground almonds to enhance the plum flavor in the middle of the cake. Where the recipe called for cream cheese I opted for mascarpone cheese. I also substituted buttermilk and sour cream for the milk as I had ran out of bakig powder and only used baking soda for the leavining agent which only works if used with a sour ingredient. Since I sometimes have a difficult time putting my best English forward, go read Veronica’s post about it, she said ten times better than I would!

I followed a basic jam making method from Christine Ferber (our French June Taylor): put together in a large pot (I use a big Dutch oven) same weight of fruit to sugar, juice and zest of 4 lemons (I used the rinds of mine) and a vanilla bean. Bring to a summer, turn off the heat, cover the top with parchement paper and refrigerate overnight. The next day, take off the parchement paper, bring the mixture to a boil and let it cook for 5-10 minutes. Skim the top foam if necessary. Laddle in sterilized jar, cover with the lids. Submerge the cans in boiling water for 10-25 minutes, remove and let cool. If the top pops while they are cooling, you have canned them properly, if not, refrigerate and use within the week.

The only problem with the cake? I think I already ate too much of it to have enough left to share with my parents…Well darn, I’ll have to make more…hehehe! 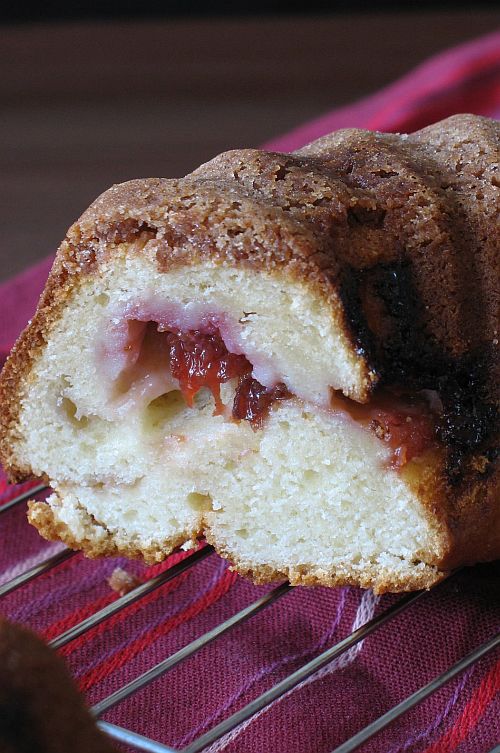 Combine first 4 ingredients; cut in butter with a pastry blender until mixture is crumbly. Sprinkle in a greased and floured 12-cup Bundt pan; set aside.
Beat mascarpone cheese, butter and sugar at medium speed with an electric mixer until creamy. Add eggs, one at a time, beating well after each addition. Combine flour and baking soda, add to the mascarpone cheese mixture alternately with the buttermilk and sour cream, beginning and ending with the flour mixture. Spoon half of batter into prepared pan, spoon jam over batter, being careful not to allow the jam to touch the sides of the pan, top with the remaining batter.
Bake at 350 degrees F. for about an hour or until cake tests done. Cool in pan on a wire rack for ten minutes; remove from pan, and cool on wire rack. 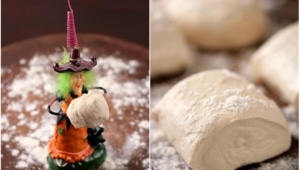 Tossing With The Daring Bakers: Plum Mascarpone and Streusel Pizza

Sorry about the sunburn, but glad that you had cake to eat when you got home…that helps. This is a wonderful way to use plum jam and meyer lemon peel is a fantastic addition to the jam. I can just taste it.

Oh talk about sunburn, the Australian sun is very strong, too.. Do take care and enjoy this marvelous cake ok?

Hi! Great blog! I have a question. How did you prepare the plums for the jam? Peeled or unpeeled? How fine a chop? Please advise. Thanks–Gina

Gina: I leave the plums unpeeled and I chopped them in half, remove the pits and again cut them in half.

Plum Meyer Lemon Jam Coffee Cake! That is a mouthful! I can’t believe that you chopped up all those plums! Very zen! I probably wouldn’t have the patience 😉
But the cake looks like it was worth all those chopped up plums

Both the cake and the jam sound delicious. I love plum jam. Lucky you to have such a generous greengrocer.

Oh, how yummy. I too am a coffee-cake enthusiast. 🙂

I wonder how you look like – red as the strawberry mirror cake?! 🙂
That cake looks so appetizing. I am tempted to get Christine Ferbers confiture book…I’m scared to make preserves but I can always eat it within a week.

I love the serves 12 (in theorie)part. You know it won’t serve more than four if I was your neighbor Helene. And take care of the sun burn.

Ummm, I don’t know if that cake would have lasted 1 day in my house!! And the jam sounds wonderful! Maybe I’ll try making some jam this weekend…

İt’s Delicious. I use pear jam.

Ouu….stumbled onto your blog and my sugar-addicted self loves it to pieces already!!

This looks so deliciously moist I can see why it was hard to save enough to share. Hope your sunburn’s better. Aloe is a blond’s best friend.

put cortisone cream on your burn…it will reduce the redness and swelling and it will heal sooo much faster.

Oh, how are you not 200 lbs???!! I had to put my Kitchen Aid mixer on hiatus because I wasn’t fitting in my pants anymore. I don’t know how you do it!

Thanks everyone for the good wishes for my sunburn. My aloe vera plant is my best friend right now. I have also put a lot of monoi oil on my legs and it helps with the burning/tingling. I can’t believe I fell asleep like that!

Anonymous: re-200 pounds: I work out everyday, run 3-5 miles at least 4-5 times a week (because I truly like it) and I work at keeping people fit so I can’t allow myself more than a couple of servings. I also give quite a bit to the neighborhood.

That looks delicious! (As does everything else). I love the little story your post before each recipe.

This looks so tasty.
Sorry about your mirror cake sunburn!

Ohhh sinfulicious torture!!!! Can’t wait to try your recipes (I guess if I eat your pastries 1 time/day, I should do fine with the diet, right?)!!!

Thanks for such a wonderful site!!!

Wow, Helene, you really know how to take every recipe up a notch!Homemade Plum-Meyer Lemon Jam sounds dreamy…and what a delightful, gourmet twist to use it in a good old fashioned coffeecake. 🙂 And bless your heart regarding the dreadful sunburn…hope you are feeling better now.

Hi Tartelette:
Oh boy, I have such a sweet tooth.
And your desserts look scrumptious.
Will try a recipe.
Julian
www.ijulian.blogspot.com

Helen,
There we go with the matching desserts again! Plums and lemons and coffee cake – that’s a sweet mouthful indeed!

That looks amazing as usual. Especially with the almond flour – that makes anything better in my book! So sorry about the sunburn!

That looks good. The center looks nice and moist.

I love all the flavors in this recipe except cinnamon!! the end result looks delicious!!

Mm that coffee cake looks like a delicious way to start the day. Yum yum! Hope the sunburn is healing!

You do have a weakness for coffee cake 🙂

Just wanted you to know I tried this recipe and it came out beautifully. I used a tube pan since the only bundt I have is sandcastle shaped. And I used sour cherry jam and walnuts. The top of the cake is so shiny! My husband loved it! (He adores coffee cakes) He has been taking it to work for breakfast. Its almost gone!

Wow, this cake was amazing – so moist! It served about 6 for us. 😛 Thanks for sharing the recipe.

I've been looking high and low for a recipe that will use up my leftover mascarpone after my tiramisu making episode! So glad to have found a baked recipe! Hope it turns out as good as it did for you!