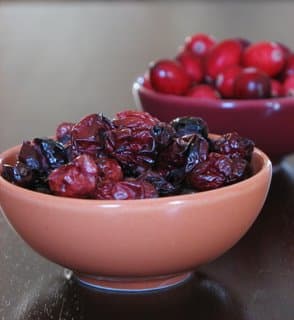 Well, in this case it was not one solo cranberry that preoccupied my day but rather 4 pounds of the mighty berry!…and I did not even host Thanksgiving dinner. When November comes around and the market stalls are covered with ruby red, plump cranberries and pomegranates I think I lose it. These are relatively new to me as when I left France 10 years ago I knew only of"airelles", a smaller relative (and the only way I had had a pomegranate was in a "grenadine")I have made up for lost time since them and prepared traditional cranberry sauce and used them in upside down cakes and cobblers.

It was about the same time when I visited Tanna’s blog and found out she was in the same kind of situation. I first read about her making cranberry juice from scratch and that really (really) tempted me but all of a sudden I saw many Cosmopolitans dancing in front of my eyes and that was not a good sign, it was only monday for crying out loud!

Her second use for them was an absolutely delicious looking coffee cake. Once again, temptation set in but it called for whole, fresh ones and I was not ready yet to use mine like that. I wanted to do something I had not done before and that is when the words "dried cranberries" became embeded in my brain. I use dried ones anywhere a recipe calls for raisins because B. hates (and believe it is a small word), so I go through a pretty (penny) big supply of them, and I had the perfect opportunity to make my own right at my fingertips. A quick search on the internet, a sleepover in the oven and I finally had dried cranberries in the morning and a whole lot to boot!

For any quantity: wash and then plunge them into boiling water for 15-30 seconds, just until the skin 'pops.' Stop the cooking action by placing berries in ice water. Drain on paper towels. Turn on the oven for 10 minutes at 350°F. Then place the cranberries on a cookie sheet in the oven, turn off the oven, and let them sit overnight or until sticky and no longer wet. Once dry, they can be kept at refrigerator temperatures for 18 to 24 months or in a freezer for 5 to 8 years.
I used 2 pounds this time.

Still 2 more pounds to go… I have decided to save one pound fresh for something…not sure yet, but all if a sudden this evening I got very thirsty for a Cosmopolitan, and tuesday is closer to the weekend than monday…right?…please say yes! It was my turn to make Tanna’s homemade cranberry juice and boy I don’t regret it….absolutely delicious. She uses an orange instead of the lemon the original recipe called for, I admit I did not use either and for no other reason that I completely forgot….

Cull through the cranberries and discard bad ones.
Place cranberries in a heavy nonreactive saucepan or dutch oven.
Bring to a boil. Reduce heat to medium. Cover loosely and simmer 10 minutes until all cranberries have burst.
Line a sieve with cheesecloth.
Pour cranberry mixture through lined sieve. Do not press on fruit.
Pour juice back into pan. Stir in sugar and boil about 3 minutes. The amount of sugar needed can vary, use according to your own taste.
Cool juice before serving.

Gluten Free Blueberry Waffles & Getting Back On The Road! 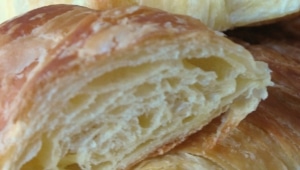 I Think I Read Wrong…Croissants???

I love the colour of the juice!

What a great idea to dry them! Do you know, I don’t think I’ve ever tried a cranberry before? Can you believe it?? I’ve had the juice but that’s it. I’ve even made an orange/cranberry/white chocolate cake with them but never ate any as it was for a friend. I know!! I must have my head examined and try these! I bet they are especially sweet/tart in the dried version, yes? =)

Oh.. and I love the pitcher and glasses – they are gorgeous 😀

That is something different to do with cranberries – look beautiful.

I am so glad you tired the juice – I was really overwhelmed with how terrific it was!
And I love that you dried a batch – that I should try.

Brilynn: it is beautiful with some good light!

Lis: you know what I am gonna ask next…I want the recipe for that cake! The pitcher and glasses were a Christmas present from a coworker last year, it is cute.

Lauren: one Cosmo coming your way!

Tanna: it was a great adn timely recipe. It is so good!

I know it is just Wednesday, but a Cosmopolitan doesn’t sound bad at all :)!

I’ll e-mail you the recipe tonight when I get home. =)

I never thought to dry them myself but it seems so easy now. Thanks for sharing the ideas!

Monisha: one Cosmo coming your way too!

VivaciousVegan: you are welcome, it is wuite easy to do!

I’m glad to see there’s somebody else making their cranberry juice at home! I made some last month, and the colour is so gorgeous, that I need to make it again soon:)

Thank you for the tasty easy recipe! I don't like store bought cranberry juice, there's something bitter about it. I'm going to have to stock up on cranberries while they're still in season to make this next summer!