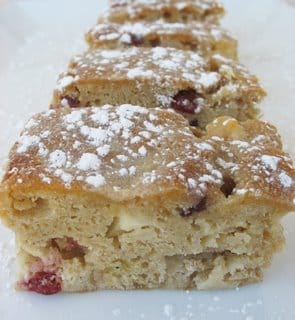 Apparently I like the book! I have tried some of the recipes and so far there has not been one we did not like. It is a great read for novice bakers as it contains all sorts of basics from breakfast treats, cookies, bars, cakes, ice creams and more. It appeals to the intermediate cook who wants to broaden his/her repertoire with all the variations Dorie gives on the sidebar of the recipes. It is full of homey, uncomplicated delights for the seasoned chef who wants to return to the basics or does not want to fuss with complicated techniques and hard to find ingredients.

Sunday afternoon, the boys were working on the boat and given that the weather was a little bit in the chilly side I thought that a batch of these apple bars with a nice cup of coffee would be totally appropriate to make them take a break. The bars are rich but not heavy, you can play with the kind of apple you use as well as the amount of spices. The recipe called for raisins but B. has a childhood aversion to them so I used dried cranberries instead and it worked even better (at least in my book). I also used Calvados instead of applejack because that was what I had on hand.

Butter and flour a 9×13 inch baking pan. Preheat the oven to 350.Whisk together the flour, baking powder, baking soda, spices and salt.In a medium heavy bottomed saucepan, melt the butter over low heat. Add the brown sugar and stir until smooth. Remove from the heat.Still in the saucepan, whisk in the eggs, one at a time, mixing well until blended. Add the applesauce, vanilla and liqueur until smooth. With a spatula, add the dry ingredients, cranberries and nuts and mix until combined.Scrape into the pan and bake 20 -25 minutes.
Let cool and prepare the glaze in the meantime.

In a saucepan, whisk the cream, sugar, butter and corn syrup over medium heat and bring to a boil. Reduce the heat and simmer for 5 minuts. Remove from the pan and stir in the vanilla.
Remove the bars from the pan and set on a wire rack positioned on top of a sheet pan to catch the drips. Pour the glaze over the bars and let set, cut as desired.

10 responses to “Applesauce Spice Bars…Another Great One From Dorie”