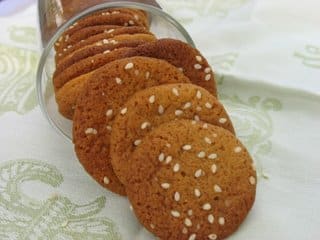 Sesame Spice Chips, adapted from Flo Braker.
Makes 8 dozens (OK so we already had a few before mailing!)

Preheat oven to 35o degrees. Line as many baking sheets as you have with parchment paper.
Sift together the flour, soda, cinnamon and spices. Set aside.
In bowl of an electric mixer, cream the butter until smooth. Add the sugar and beat until creamy. Add the egg and incorporate well. Add the molasses and finally the flour/spices until thoroughly combined
Using a 16 inch pastry bag fitted with a 1/2 inch plain decorating tip (in a pinch, a freezer bag works fine), pipe half teaspoons of dough 1 inch apart on the baking sheets.
Using a damp pastry brush (or wet fingers slightly) flatten the cookies a bit. Sprinkle the sesame seeds over them. Bake for 8 minutes until they are flat, and dark brown.
Stack in an airtight container and store at room temp. up to a week.
Note: they freeze also really well.

Ok, so the recipe is not a fast one but as Monisha said before fast food is not necessarily one that is made fast, it is just eaten that way.
Trust me, these cookies are delicious! 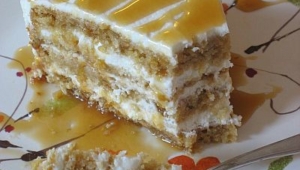 Waiter There Is Something In My…Butterscotch Mascarpone Cream Layer Cake!

An Anniversary: The Other Half Of The Team… 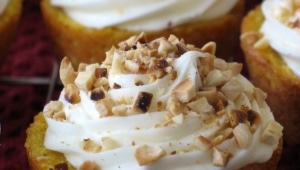 Carrot Cupcakes: Celebrate A Birthday And A Craving

Hi Helene –
The Cookies look delicious, with fragrant spices I’m sure the aroma while baking must have been out of this world ! I’m sure the recipient will be extremely thrilled !!

Monisha:you are right, the smell is incredible. It made it hard to resist not eating the shole batch!