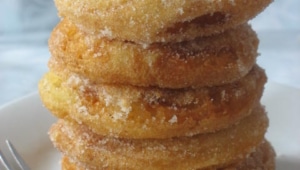 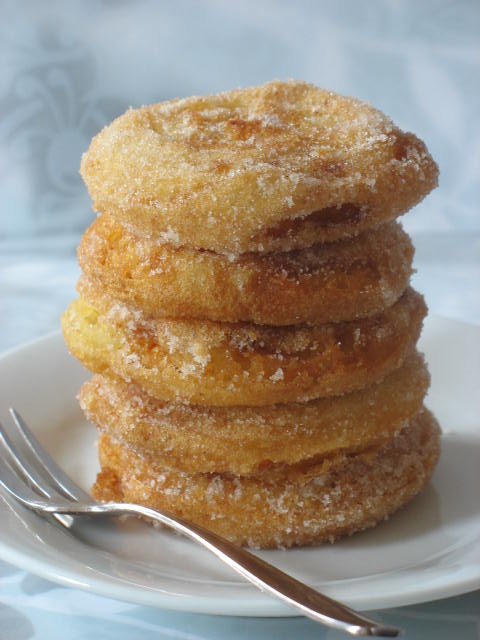 I know…I am evil to make apple and cider beignets, to take their pictures and put them here while some of you have made food related New Year’s resolutions. I guess now you know that I don’t make any…! No, seriously, I do make "adjustments", not resolutions. Just the word puts too much pressure so I make a list of bad habits that I need to correct. Back to the beignets though. If you think about it, I am not really evil if you are tempted by these. Don’t they say "an apple a day keeps the doctor away"? And that if you fry things at a high enough temperature, you don’t get as much oil in the food? So you see….no evil.

Alright, I might be trying to justify the fact that I enjoyed one too many of them tonight but sometimes life is too short to worry about two or three Apple And Cider Beignets. I am not pushing you to throw caution away to the wind but let’s face it between two of these and two store bought ones, I know which one I am going for. First, they are made with fresh ingredients that I can pronounce without scratching my head, and second of all who knows what tomorrow holds?

I have been craving fruit beignets like these for months but beside the four days we had of cold-er weather, there has never been a "proper"occasion. I can’t say "cold" for those of you under really bone chilling conditions or you would laugh at me! Anyway, if I wait for another drop in the temperatures I might have to move up north before the right moment comes along. And really, when is the right moment? My philosophy is that if it is not hurting anybody and not breaking any law, (college days are definitely over), well, now is as good a time as ever!

I was going to use one of my mom’s recipes until I noticed Kate Zuckerman had a pretty mouth watering one also. She uses light beer in her recipe but I had just opened a bottle of "cidre brut" so I went with that instead. Since one of my New Year’s "adjustments" is to try more than one recipe from cookbooks I receive, I went along with hers not knowing that I was in for a surprise. I don’t know where she gets her apples but after the four called for in the recipes were all dipped and fried, I still had enough batter for four more! So there I was cleaning and slicing a pineapple as quickly as I could before the oil would turn smokey black. No time to roast the pineapple slices as she does the apples but they still turned out alright. Given more time though, I would have proceeded as she does in the recipe just to avoid too much of a bitey feel from the raw fruit. Consider yourself warned and either pick mammoth sized apples, double on the quantity or prepare other fruits. If you go with canned or jarred ones, make sure to pat them real dry with paper towels as we all have discovered at some point that oil and water don’t really like each other, especially at frying temperatures. 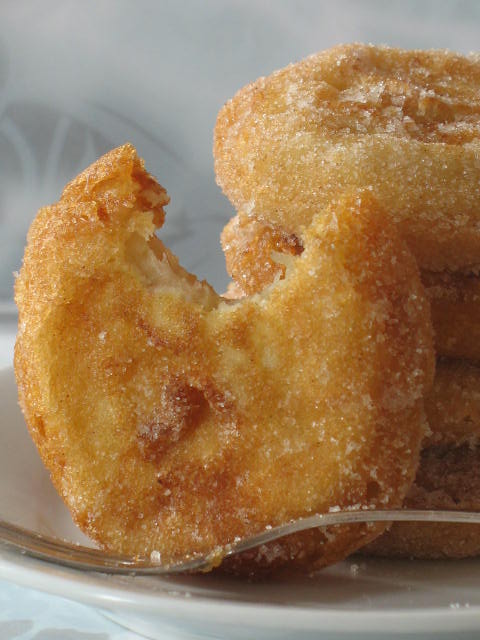 Preheat the oven to 350F. Peel and core the apples. Slice them into four even doughnut shaped sections, crosswise. Lay the apples on a parchment paper lined baking sheet. Dot them with butter and sprinkle with sugar. Bake until the apples are brown and tender but not completely done. Let them cool to room temperature.

While the apples are baking, prepare the batter to fry them. Separate the eggs, reserving the whites. Whisk 3 egg yolks (discard the 4th one or use for something else) with the salt, butter and cider. Add the flour and whisk until smooth. In the bowl of a stand mixer, whisk the egg whites until foamy, add the sugar slowly until you get stiff glossy peaks. Carefully fold the whites into the egg yolk batter.

Note about frying: do not overcrowd your pan as it will drop the temperature of the oil and you will have a soggy oily beignet instead of a crispy one. To test if the oil is ready, dip the end of a wooden spoon or dowel in the oil and if you see bubbles at the base touching the oil, it is ready.

Heat one cup of oil in a frying pan to 325F. While it is heating up to temperature, mix the last measurement of sugar with the cinnamon in a plate and keep it close as you will dip the beignets in this once they are fried and cooled a bit.
Dip each roasted apple slice in the batter, coating both sides and gently lay them down in the oil. Cook 4-6 apple slices depend on the size of your pan, until they start to brown around the edges ( I used an 8inch cast iron one and 4 slices at a time). Using a slotted spoon or spatula, flip the apple over and cook until golden brown. Drain them on paper towels for a minute and dredge them in the cinnamon sugar. Serve as soon as possible or reheat briefly in a pan the day after (if they last that long). 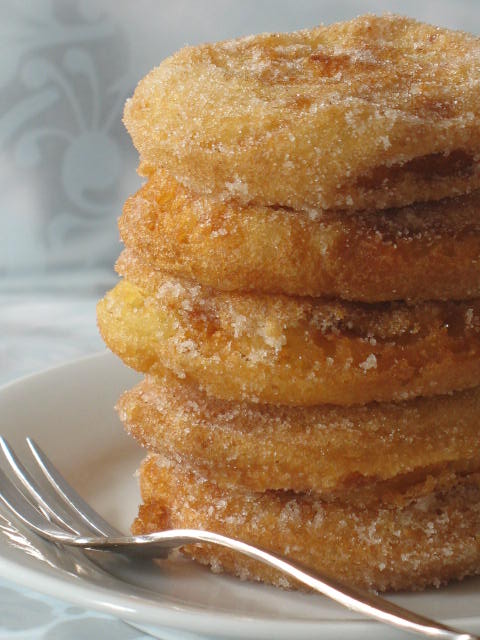 P.S: I have read your comments and your emails about the caramel corkscrews and I will make a proper post about those this weekend. I also got emails about a cake I posted moons ago without writing the recipe down for you, so I will upload that too!