There is rarely a post without a story around here. I know I had a story for today. Had to have one. As my dad would say "I did not say it was good, I just said there was one". Simple and straight to the fact, which is not how these Muscadine Grapes Frangipane Clafoutis came to be but the result with our friends at dinner last night was actually just that. Simple and straight up good. Oh wait! They are the story. The dessert, the grapes.

A friend wanted me to teach her and her husband how to make souffles. We immediately turned this opportunity to see them into a dinner with a larger group. In return I asked that she helped me out with the huge cross stiching I’ve been working on for years. Yes, I decided one day to cross stich one famous Charleston street filled with gorgeous ante-bellum houses, and it feels like I have been at it for an eternity! After the first tray of souffles went in the oven, she gave one look at my cross stiching and exclaimed "Well, looks like you have a problem staying within the lines". I gave her the biggest smile and said "Doh! It’s me we’re talking about. Of course I can’t stay within the lines!" She quickly fixed my issues and we proceeded to round two of the souffles lesson.

After the third tray, I could see they both had the hang of it and we moved on to other things. We had made small batches all along and realized we would not have enough desserts for everyone, especially after all the sampling and testing we had done as the lesson progressed. I quickly glanced at the pantry and fridge and decided to assemble another dessert. I was in the mood for clafoutis, Bill was in the mood for something with frangipane. I had bought some really juicy red and green muscadine grapes, the firsts of the season, and decided to add some to my clafoutis-frangipane mix. 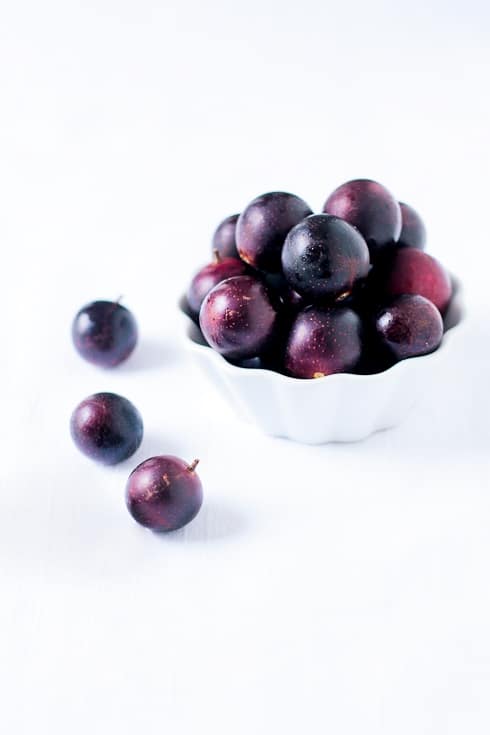 Muscadine grapes are big grapes with somewhat of a thick skin which makes them happily snap and pop when you eat them. Just like with kumquats, it’s best to take the time to seed them but luckyly there are little of them inside and they are pretty easy to discard. The season is usually September through October but it looks like our crops here have already started to be bountiful. Happy me! Much like kumquats I just love to pop them in my mouth for a snack but I discovered by pan searing them in honey that they are absolutely wonderful warm on vanilla ice cream. Happier me!

As we were fixing dinner, setting the table, getting drinks and nibbles ready I realized I was not paying attention very well and had completely forgotten to add the green grapes in there and we were munching on the reds I had saved to top the clafoutis-flan-whatever-we were-going to call-this. Improvise, devise. Quick! Alright, so we would bake the dessert and quickly pan sear the green muscadine grapes in honey and top the frangipane clafoutis with those. Ok, that would work. Reds inside, greens outside. Guests in the driveway!

Here is what we were not expecting: when I took the tray out of the oven all the frangipane clafoutis ressembled souffles. It was like the never ending souffle making oven! We gathered around the island and started counting, absolutely sure they would deflate within seconds. One, two, three…ten, thirty. Nothing moved. The beautiful golden crust on top remained puffy and upright. 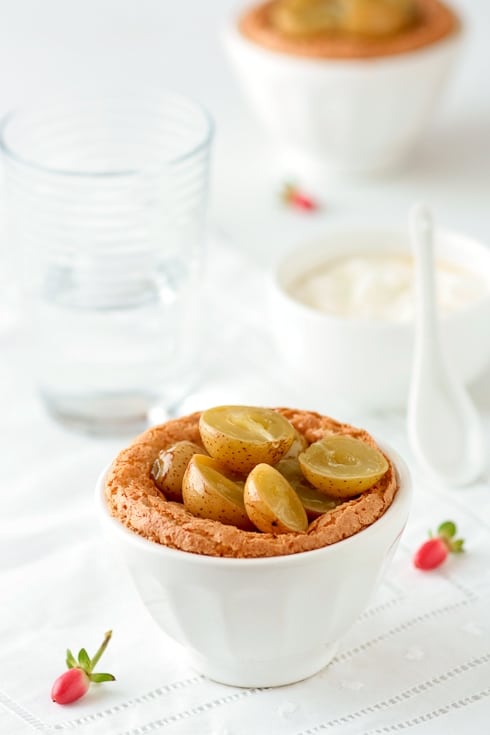 Hmmm…where to put those pan seared green grapes now? Bill took the back of a spoon, smashed the tops down as the rest of us looked horrified and spooned the green and saucy grapes in the middle. He looked at me all happy and said "That works! See I can do stuff in the kitchen!"

He was absolutely right! It worked perfectly, except we had no idea how to call what I had just baked so for now it’s just Muscadine Grape Frangipane Clafoutis. I am leaving the souffles part aside because I have no idea if the effect will reproduce itself if I make these again or if you decide to try this recipe. I knew the method would make them rise, I did not know ours would never fall!

One year ago: Lemon Balm Infused Berries with Almond Tuiles.

Prepare the frangipane clafoutis:
Preheat the oven to 340F and position a rack in the center. Lightly coat 4 ramekins with cooking spray or a dab of butter and place them on a baking tray. Set aside.
In a large bowl whisk together the sugar, butter and the egg yolks until the mixture is a smooth paste. Add the heavy cream little by little. In a separate bowl, stir together the almonds, flour and salt, add this to the egg yolk mixture and whisk until well blended. In a very clean bowl, whip the egg whites until stiff and gently fold them into the almond mixture. Divide evenly among your ramekins (make sure to fill them only 3/4 of the way up) and place 3-4 grape halves on top of the batter. Bake for about 25-30 minutes. Top with the pan seared green grapes.

Prepare the pan seared grapes:
In a large skillet melt the butter over medium high heat. Add the grapes and sear them for about 5 minutes or until they just start to soften. Deglaze the pan with the honey and remove from the heat.