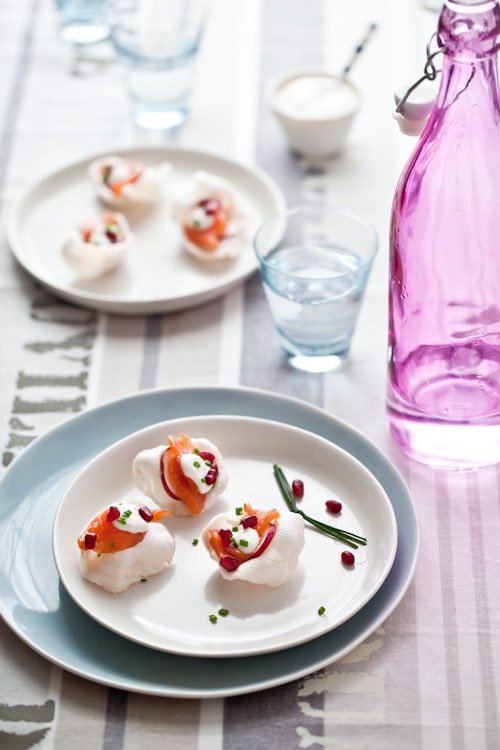 Sometimes I get this crazy notions that I have a lot of time on my hand to do whatever. I know. Crazy right?! I mean, as the years go by I realize that "it will only take five minutes" will never be an accurate statement. It takes Bailey a mere 30 seconds to hide my shoe and I end up spending the next hour looking for it (what do you mean you have more than one pair of shoes?!!). However I relish recipes that allow me to marinate, brine or cure. Recipes that let time do its thing. Not in five minutes and surely not in thirty seconds.

There is virtue in meals quickly put together. My better half is eating a lot of leftovers with a poached egg on top as I work my way through several book projects at once. That really takes ten minutes and it’s just fine most nights. There are however days when I want to take more time with food. So I make ravioli and enjoy rolling dough to relieve stress and I release a few expletives in the process. I let my pan of ratatouille go on for hours until perfectly caramelized. I relish in the long simmering process of onion soup. 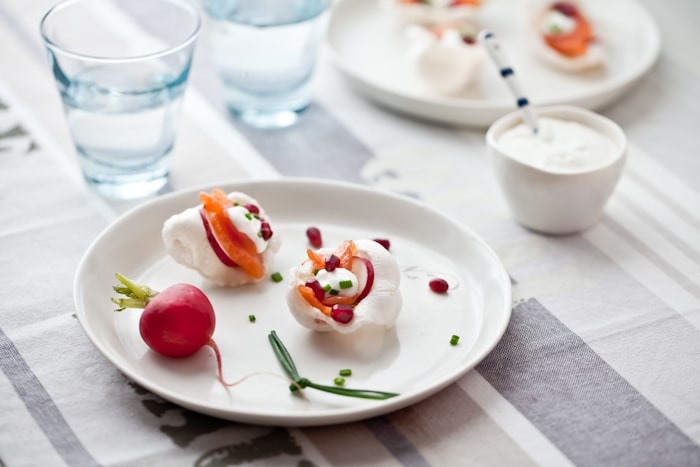 And then entered gravlax…The last time I had made gravlax was over 10 years ago. On a whim. After watching The Galloping Gourmet on T.V. I remember it distinctly because France had not been exposed to many cooking shows before and something about the concept was brilliant. The experience was so easy that I really can’t figure out why I waited this long to make it again.

It is so simple and you can literally put the cure together in less than 10 minutes and two days later have the most delicious gravlax. Bill loves it on his bagels in the morning and could not stop asking me "ready yet?" "are you sure it’s not ready yet?" I kept repeating like a stubborn mule "Thirty six hours dear. Be patient". Patience is key. The gravlax is buttery, sweet and salty and fragrant of dill and juniper berries all at the same time. 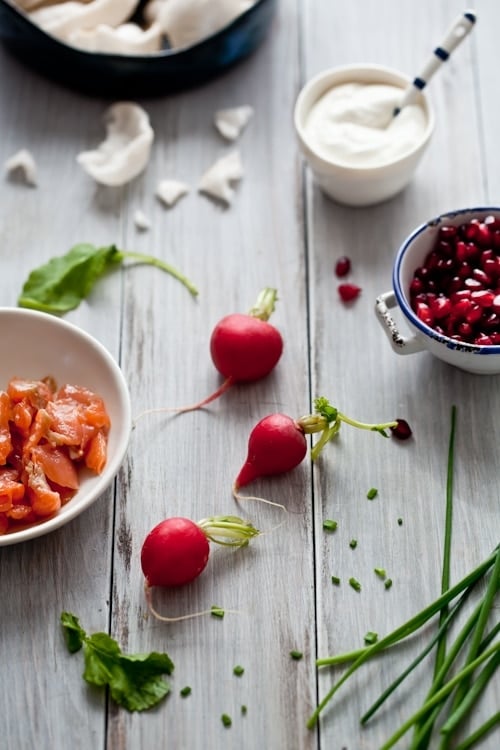 Some of us belonging to the Martha Stewart Circle were gifted with quite many pounds of fresh Norwegian Salmon as part of a campaign they were running. I love salmon but living on the waters of South Carolina, it is not a fish I buy often since it does not fish in the waters around here and I try to support local fishermen as much as possible. If I get salmon, I get Pacific wild salmon but I was intrigued by the claims of sustainability and ethically ocean-farmed raised salmon.

I got in touch with my favorite source on everything seafood, Becky from Chef Reinvented whose first cookbook, aptly entitled Good Fish is coming out in the Spring. What came out of our exchange, and without knowing lots of specifics about this company, is that not all ocean farmed salmon is equal and that some Norwegian farms are better than other farms, do not use antibiotics and monitor the growth and feeding of the salmon carefully. We both agree that even though it could be raised in better conditions than other farms in the world, it still does not compared to wild caught salmon. We also determined that it would be a waste of darn good fish not to cook with the one I had received! 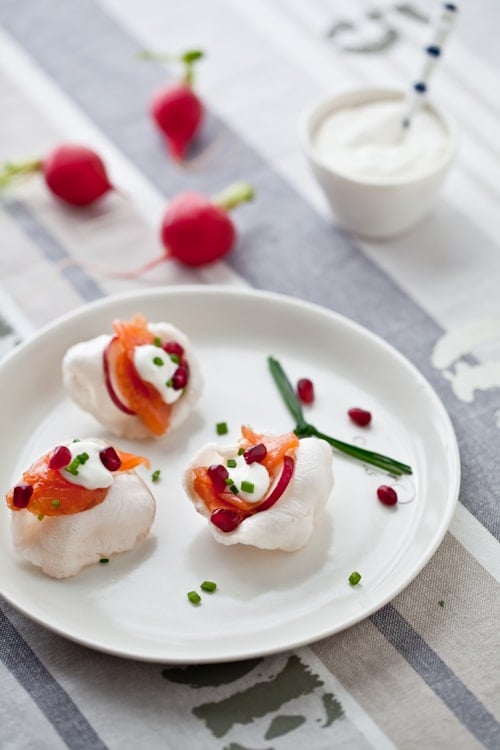 I started with making Thai Coconut Salmon Soup actually and posted a preview on Flickr a couple of weeks ago but did not get around to post yet. The second one was this appetizer made with homemade gravlax and I could not help but make a quiche. No fear, everything will be up on the site at some point! Nothing could be easier than this appetizer. Well once the gravlax is done of course… I pan fried some dried prawn crackers (also named chips depending on the brand) and topped each with a slice of radish, some gravlax, a dollop of creme fraiche and sprinkled everything with chopped chives and pomegranate seeds. The combination of sea, sweet and salty was pure joy on the tastebuds.

Oh dear… we ate the entire thing that evening with some bubbly and shared it all with good friends.

For the gravlax, adapted from The Minimalist.

Mix together the salt, sugar, dill and juniper berries. Place the salmon, skin side down, on a large sheet of plastic wrap. Cover the flesh side of the salmon with the salt mixture, making sure to coat it completely. (There will be lots of salt mix; just pile it on.)
Wrap the fish well. If the temperature is below 70 degrees, and it is not too inconvenient, let it rest outside the refrigerator for about 6 hours, then refrigerate for 18 to 24 hours more. Otherwise, refrigerate immediately for about 36 hours.
Unwrap the salmon, and rinse off the cure. Dry, then slice on the bias (see illustration). Serve plain or with lemon wedges, creme fraiche, sour cream or a light vinaigrette.

For the rest of the ingredients:
freshly fried prawn crackers/chips or already made ones – just make sure they are fresh! (available at most Asian grocery store)
12 thin slices of radish
1/3 cup creme fraiche or sour cream mixed in with some salt and pepper to taste
2 tablespoons chopped chives
1/4 cup pomegranate seeds

Make the gravlax according to the recipe directions. Fry the prawn chips according to package instructions or use already fried ones (available at Asian grocery stores) Layer slices of radishes, slices of salmon, top with dollops of sour cream, some chives and pomegranate seeds.

Use as little or as much as you want…just be prepared. The combination is seriously addicting!!