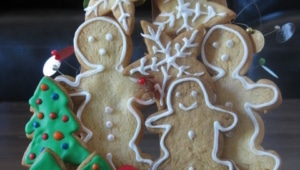 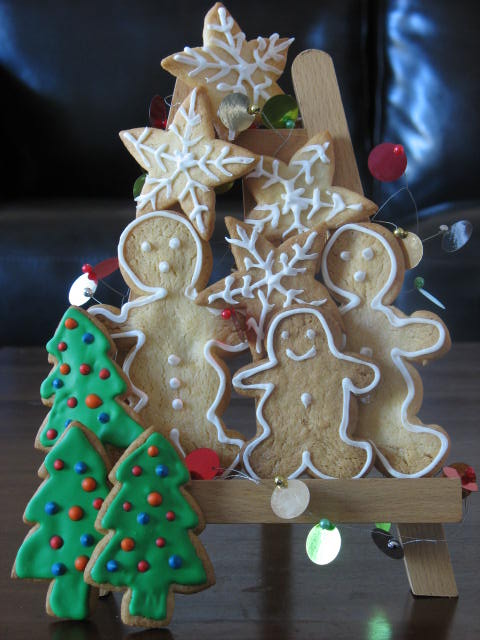 I often talk about my neighbor C. and her twin boys and how they are a loving, loud and buoyant pair. What I failed to mention so far is that about once a week, I "borrow" her boys for the afternoon. This expression started over a year ago when I kept the kids occupied one afternoon by teaching them how to make cookie dough while she was cleaning the house top to bottom and had no way of keeping them busy without supervision. They play a lot on their own but believe me we are still amazed at how they made it to seven so far without a broken leg or worse injury: fire, water, engine, anything that rolls, chops, cuts, explodes will find a way into their hands.

Having said this you might think I was crazy for volunteering to have them over. Well, when things start getting heated and borderline out of hand, I give them"the look". My grandfather Rene had "the look", piercing and serious enough to make you melt in your socks and I am glad I inherited that particular feature. One glance and the boys were playing somewhat in a quieter way but not entirely to make a studious afternoon: what fun would it be to make cookie dough without a little play, right? I was merely trying to keep the dough on the counter and not used as putty on the walls and grout on the kitchen floor. After that afternoon last year, their dad joked around and asked if I still wanted children after that experience and I joked "I’ll just borrow yours for the time being", and that’s how the expression stuck around.

Last Friday C. asked me to watch over the boys so she could pack the family’s suitcases for their trip to North Carolina. I said "Great! Let’s do A Drop In and Decorate Party!"…which was received with 6 incredulous eyes and a big "a what party?" I then proceeded to tell C. and the boys how crucial they were going to be in bringing some joys to less fortunate kids their age.
Every year since 2002, Lydia of The Perfect Pantry hosts a Drop In and Decorate Cookies For Donation. When I read about it in November I mentioned it to a few friends but we never seemed to be able to find a suitable baking day. Thus, when I was supposed to borrow the twins last week, it seemed like my last chance to bake for a great cause before the full blown crazy wind of the holidays.

Let’s just say that I spend half my day saying "Don’t touch that with your red hands! Step away from the wall! The first one to open the oven without me has to spell brother backwards, etc…." Interestingly enough, I never have to say these but a couple of times as they are completely into their task and they took their job of decorating for charity very seriously. They had a purpose, they were going to play Santa, they were going to make people smile. I love hanging out with those two because you give them the choice between a video game and piece of wood to go bang on something…they’ll go bang and march down the street to get the other kids involved. But again, that might just be because C. is the coolest mom ever!!

We made a plain sugar cookie dough, rolled cut and baked about 8 dozen cookies, and iced them with an icing from Dorie Greenspan found on Epicurious. The best I ever worked with so far, smooth, shiny and spreadable, very easy for the kids to handle. They kept one dozen to give to friends at school, and I kept one dozen for friends too, the rest went to "Helping Hands" which provides safe shelter to victims of domestic violence and their children. Victims there are in immediate danger from verbal, emotional, physical or sexual abuse. I am familiar with the place as I go there about once a month for baking or cooking demo with another chef friend of mine and we teach women there how to come up with good and wholesome meals while on a tight budget and with minimal equipment. There are a lot of women and children who are so disheartened with the basic notion of love, self and kindness that I really wanted to help put a smile on their face. Saturday morning we dropped off all the cookies, trees, sugar men, snowmen and visited the shelter for about an hour…long enough for me to almost "lose" the twins who were busy outside making mounds of dirt for "make believe sleigh rides"…their words, not mine! Where do they get such ideas?!!! Anyways…mission accomplished. The whole experience was profitable to all on so many levels, so if you don’t know what to do with the family visiting and all the kids getting in your way this weekend, sit them down at the kitchen table and make them decorate a bunch of cookies for a good cause. Chances are you will be visited by the Spirit of Christmas…

In a large bowl, mix the flour,baking powder and baking soda and set aside.
In the bowl of an electric mixer fitted with the paddle attachment, whip together the utter and sugar until light and airy. Add the egg and whisk until well incorporated. Add the flour mix and whisk until incorporated.
Divide the dough into two balls, flatten them out and wrap them in plastic film. Refrigerate for a couple of hours or overnight, until firm.
Remove one dough ball from the fridge and roll the it out in between sheets of plastic wrap or parchment paper. Use your favorite cookie cutters to cut out as man shapes as desired. Reroll the scraps, and refrigerate that smaller dough until firm again. Work with the other dough ball in the meantime.
Bake the cookies until they just about turn gold around the edge,8-10 minutes at 350F. Let cool completely before icing.

Using electric mixer, beat the powdered sugar and egg whites until thick and shiny, adding more powdered sugar by tablespoonfuls if mixture is too thin to spread, about 3 minutes. Add lemon juice. Add more powdered sugar if the icing is too thin for your taste. Divide icing into portions. Add different food coloring to each,according to what you plan to decorate. Cover until ready to use. You can refrigerate the icing for a couple of days if necessary.

Meeta's Monthly Mingle this time around is centered around the event created by Lydia, so the cookies in the above picture are also virtually going to Germany! 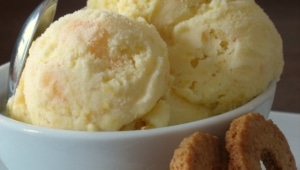 Excellent cookies for a wonderful cause by a super lady and her neato helpers.

I’m grinning from ear to ear! The cookies are beautiful, and you and the twins are rock stars for doing a Drop In & Decorate. I can just imagine the smiles on the faces of the recipients of your cookies. Thank you so much for helping to spread the word about Drop In & Decorate, and happy, happy holidays to you, your family, and your neighbors.

so sweet for you to take care of the twins. And I had to laugh at "the Look" because my DAD was so good with it it kept all us kids in line.

I am sure they would be the cutest Santa ever 🙂

You are a saint. Not only for taking these gorgeous cookies to the shelter but for taking in these two little "angels" every now and then.

great cookies for a great cause. how fitting for the holiday season!

The perfect Spirit of Christmas party. You are a most wonderful neighbor and friend. I really enjoyed "borrowing" my neighbors kids years ago.

glad you were able to make some delicious sugar cookies for a wonderful cause – happy holidays!!

Hahaha! you are sooo amazing with the kids. it does get a bit hectic when kids are around but it is soo much fun too. I always say you make a great aunty Helene. Looking forward to the day you can watch over Soeren!

Sounds like a win win win win situation to me. You get to do something you love to bring joy to people in need, teach up and coming pastry chefs the basics of cookie baking and decorating, help out a neighbor who, I’m sure, can really use a few hours of peace and quiet, AND donate homemade gifts to a local organization. Way to get into the holiday spirit!

I’m sure this is really lame, but I have shied away from making frosting recipes that use uncooked egg whites.
It is safe, I assume. You use it, Epicurious gives the recipe… maybe, I will take the plunge and give it a try. Egg whites do make for that glossy, smooth texture. I love the addition of lemon; I use it on my roll out gingerbread cookies and it is scrumptious!

Helen, these sugar cookies are simply delightful! Have a wonderful and safe Christmas and a Blessed New Year! xo Carol

As beautiful as the cookies are, I’m sorry to report that when I used this recipe to make my Christmas sugar cookies, I had a really difficult time. The dough was extremely dry and I could barely get it to hold together into balls to refrigerate. When I removed it from the fridge, I had to break the balls apart to be able to roll them, and my cookies repeatedly broke/flaked apart. Are the liquid/dry ingredient proportions correct?
— Jen

Jen: I don’t know what went worng because I did it again today without a problem. Are you spooning your flour in the measuring cup and then leveling it out? Sometimes the method used can make a big difference.

What a wonderful cause and a great idea. Love your blog!