Your search for label/panna cotta got 1 results 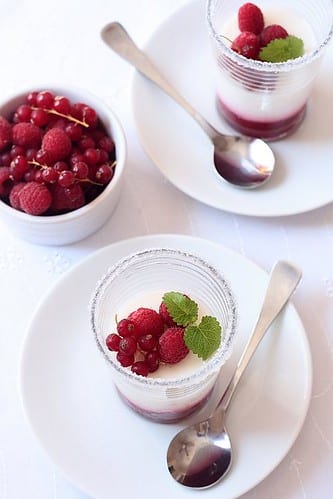 I need to start with an apology…or two. First, as you can tell my blog posting schedule has slowed down to 2 posts a week instead of every other day. Hmmm…wonder why?!!! I really wanted to thank you for keeping on reading and checking back, especially right now that I have noticed some stressed induced grey hair. Ok, only two..but still! Second, I wanted to apologize for being such a ghost commenter on your blogs. I sometimes have to pack a whole week’s worth in one evening so do not worry if it seems like I am stalking your blogs on Friday night….whole pages at a time. In that regard, I wanted to thank you for coming here and leaving comments, you have no idea how supportive I find them, especially at midnight when I am tweaking a recipe for the third time and recalculating metrics one more time.. just to be safe. So peeps….from the deep dark corners of my kitchen, thank you!

It is funny how things happen in series. Right after I posted the Daring Bakers challenge on gluten free crackers and vegan dips, a close friend of ours told us that he had been diagnosed with an allergy to dairy. While not an immediate concern since we do not live together, it became one fast since we had just invited them over for dinner. My initial thought was to look closely at the menu and remove all dairy from it until he called and asked if I could help him come up with dairy free options of his favorite foods. Absolument! Avec plaisir! Yes, it would be my pleasure!

One of his favorite desserts is panna cottas, this delectable Italian concoction of cream, sugar and milk and precisely what he thought he would have to give up on this new eating regimen. I reassured him that there were tons of dairy free milks and creams available nowadays that it would not be difficult to satisfy his sweet tooth. He had just bought a carton of soy milk that tasted just like cardboard and he was starting to have serious doubt he’d find something he’d like. I reassured him that he had probably picked up the only cardboard tasting one in the bunch and pushed him to persevere and try rice milk, oat milk, hazelnut milk and my personal favorite, almond milk.

I actually think he gave me an easy one to tweak first. There are so many ways to approach panna cottas: milk, cream, yogurt, buttermilk, sour cream, creme fraiche, fromage blanc. All can be used in making this dessert. I like yogurt based ones a lot but I have a fondness for rich "creamy cream" ones, so does our friend. Problem with almond milk is that it tends to be on the thin side consistency wise so I added some dairy free creamer to the base, like I would in my usual recipe (whole milk and cream). I was a little concerned that the overall taste would be to his liking so I came up with a little diversion just in case: a little raspberry and redcurrant pureed at the bottom of the glasses.

The end result could have fooled the best dairy lover out there (hmmm that might be me!) and the almond milk added a little extra nutty flavor that was perfect with the berries. No grittiness, no cardboard after taste, no "fake" taste lingering after that last bite. Feel free to substitute your favorite dairy free milk and cream as well as fruits to go along. On the other hand if you’d rather stick to regular dairy full panna cottas, click here to get some ideas. 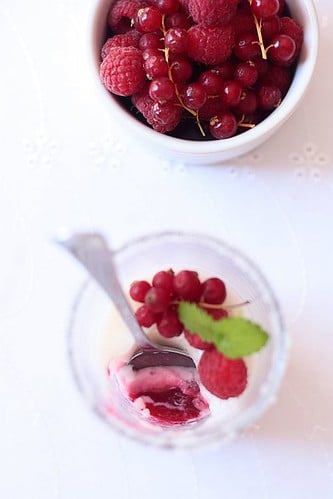 Kitchen Notes:
1/ When you pour the liquid over the fruit, you will notice that the fruit and liquid mass have a tendency to get a little mixed and some of your fruit starts to float in the milk. One way to remedy that is to freeze the glasses once they are filled with the fruit puree while you prepare the panna cotta. Make sure the liquid is at room temperature before pouring it into the glasses or you will shatter your glass.
2/ I used Almond Breeze milk.

In a food processor, puree the raspberries and redcurrant together and divide the mixture among 4-6 glasses. Freeze (see Kitchen Note).

Combine all the ingredients, except the gelatin, in a saucepan over medium high heat and bring to a boil. Heat the gelatin in the microwave for 8 seconds and quickly stir it in the cream mixture. No microwave at our house so I set the cup with the gelatin in large saucepan with enough water to come up halfway up the sides of the gelatin bowl, on medium heat and let the gelatin melt that way. Let the panna cotta mixture cool to lukewarm. Remove the glasses from the freezer and slowly pour the cream over the red berry puree and let set in the refrigerator for at least 3 hours. Decorate with fresh berries if desired.

To make your own almond milk, you can check this recipe here, I have not tested it.

Home » You searched for label/panna cotta