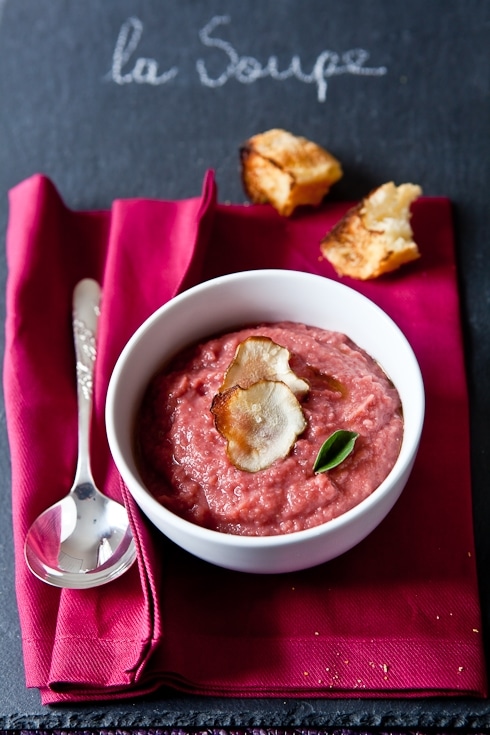 Growing up, root vegetables were not something my mom would cook often. Except for potatoes and carrots it was pretty much never actually. Too many turnips and rutabagas during the shortages of World War II made my mother a little reluctant to use them, even decades later. I don’t think my dad would have minded at all. He never minds anything he can eat. That’s what I like about him. He’s always game to try new things. Mom too don’t get me wrong. Even pink soup. 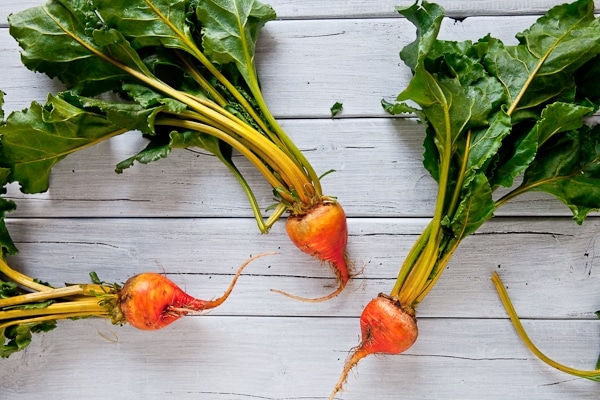 Yes, looks like I did channel my inner Bridget Jones when I put a bunch of roasted vegetable in the blender and walked away for a minute to turn some dough. You see, after an ok venture into blitz gluten free puff pastry with Shauna in Seattle a few weeks ago, mom and I have been working on cracking our own puff pastry code. Her health condition benefits from a little less gluten too and it’s been really fun to come up with gluten free versions of her favorites. Seeing what Jeanne did, I know we’ll get there. 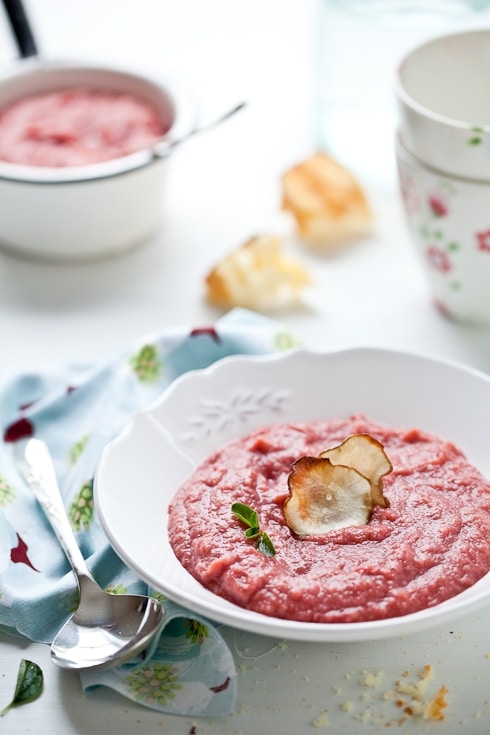 Here I was, giving our doughs one last turn when I heard my mom go "hmmm…sweetie. The soup is pink. Did you make it pink on purpose?" Ugh no…shoot! Wait! What did I do? Who is going to want to eat pink soup? "Oh no! Les betteraves rouges! (the red beets!) I forgot to remove the red beets!" I had roasted a mix of root vegetables for soup, pushed some red beets to the corner of the pan for a salad and instead just dumped the whole thing in the blender. Hence, the pink soup and B. calling me Bridget when he saw it.

There is always one kitchen blooper when my parent come visit. Too many things, too many languages going on at once. Too many jokes and giggles. And there you have it, one of us has a brain freeze. Or two. 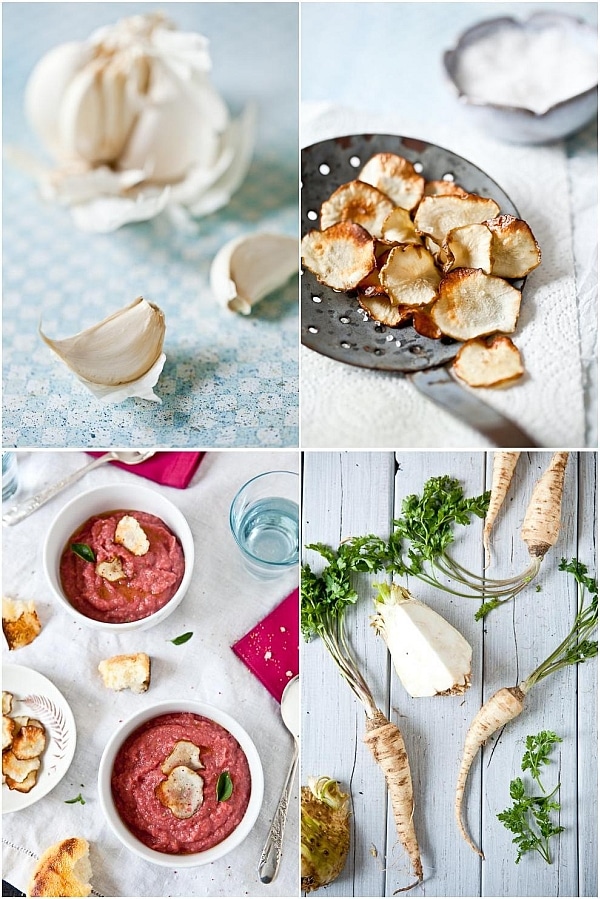 But they love me, discombobulated or not, and ate the pink soup. Yes, Bill ate beets. People in Charleston surely did not feel the earth shatter from it but we did. Actually we held our breath as he looked hard at the soup in front of him. "Interesting. I don’t think I have ever had pink soup before." I told him it was a bunch of roasted root vegetables, including roasted red beets. "not pickled? not boiled? not raw?" he asked. As I shook my head negatively three times in a row, he exclaimed "Well then. It’s lovely. Just as it is. Bridget." 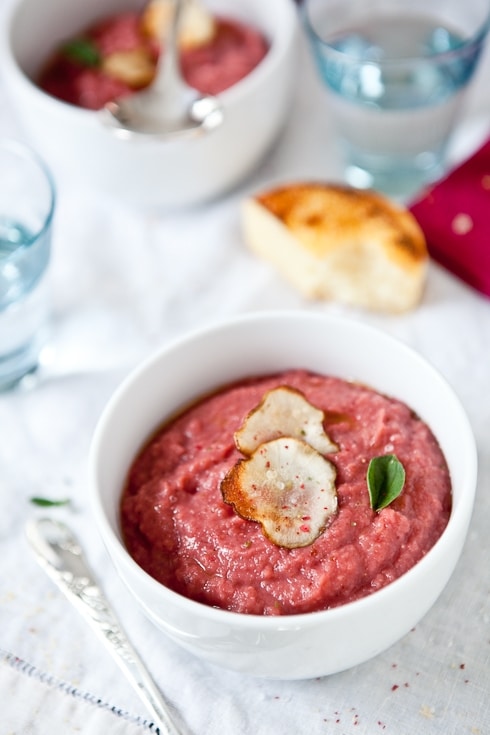 The soup is a mix of parsley roots, celery root, sunchokes, golden and red beets, potatoes. To add some depth, I added roasted garlic and oregano from our garden. I saved one sunchokes that I sliced thin and pan fried in a bit of olive oil until golden brown to garnish the soups with and served them with gluten free English muffins. The nex day we had leftover with freshly picked crab and gluten free puff pastry croutons (!). It was a hit with everyone which made me wish I had made a bigger batch right from the start.

P.S: My brother says "thank you" for all the birthday wishes. You really made his day!

Place all the vegetables in a large bowl and drizzle with the olive oil, salt and pepper to taste and mix well. Place them all in a large roasting pan and roast at 375F – 400F until tender and golden brown. Remove from the oven, remove the oregano (discard) and let cool completely.
Once cooled, place all the vegetables in a blender and add as much as little water as you like to reach the soup consistency that you prefer (we like ours on the thick side) and puree until smooth.
To serve, reheat as needed and serve with bread, croutons, oregano leaves, etc…

A Winter "Salade Composee" – A Big Bowl Of Sunshine.

I only heard of golden beets for the first time the other day in the Ottolenghi cookbook so I'm glad to see them being used elsewhere. I am yet to find them on sale in my part of London though.

I love roast vegetable soup, I never even thought of putting Beets in! It's a great idea and looks gorgeous. Beautiful photos aswell of course! x

Lovely post… at least the soup was not blue ;-). And I'm sure it was tasty anyway.

For starters I'd like to say that I love that your husband can quote Bridget Jones Diary! And secondly your soup is edible unlike Bridget's. Which doesn't surprise me! I love throwing things together and have something 'unexpected' happen. As always your photography is devine and enjoy all those laughs and inside jokes with your family they are more precious than anything plus this soup is more special because of them!

Quite new to me but it really seems worth trying. Thanks for sharing this.

I made lilac soup once by putting in left over red cabbage with the other vegetables. Tasted lovely but my partner kept referring to it as "Barney Soup" which was a little offputting!

Roasted vegetable soups sounds so wintery and yet your pictures are so vibrant and springlike!!! I also expected a chunky soup, to find a pureed soup is such a surprise!!

The color of this soup is absolutely beautiful! Not to mention that it sounds delicious.

Pink soup.. yummy.
Most of the vegetables that is required are not found in Malaysia.
Too bad, I can't try it out.

Pretty in Pink! I am sure that the combination of vegetables made for a delicious soup. I am not sure if I could get my hubby to eat something pink (even though he loves beets), so good for you!

The colour may be unusual, but your pink soup looks delicious and matches that beautiful dark pink napkin perfectly. Lovely styling!

borsht beeing my favourite soup, has made me quite open to pink soups (i like mine with creme fraîche). but i've never tried golden beets, and i was wondering what they are called in french…

New to reading your blog, but I was compelled to post because this recipe is similar to something I've been doing all winter long. I make what I call "market soup" because all of the ingredients come from the farmer's market, so it's whatever is in season. It started with me pureeing up some leftover roasted root veg with vegetable stock. I love it because it's easy, flexible, and tasty–I think the hardest thing is making sure to get the proportions right so that one taste doesn't dominate the soup too much.

This soup looks so delicious. I love soup and especially ones with roasted vegetables so this will definitely be in my "try" folder.

I also absolutely love your photographs. I wish I could take pictures like you!

Wow! Your soup looks delicious! Great idea and something different!

Hahaha, at least it turned out good! And it's pretty. :]

I know what you mean about root vegetables–my family only eats potatos and carrots too. :] But I love radish and beets!

Wow, that looks really yummy! Have to try it, I love root vegetables 😀 And it's pink!

Oh, I love beets soup. I have had a Spring/Summer cold version. Delicious!

What a funny post. I love all the Bridget references and that your family was game to eat your pink soup. I'm not sure mine would have been! : )

Being pinkish makes it all the more springish. Lovely.

IT IS lovely! What a serendipitous find! Love the color this soup.

Pink soup…hmmmm, perfect for Easter! My sister is a 'pink girl', and I think she would enjoy it (as long as she doesn't know what's in it lol!)

Enjoy your time with your mama and papa, I get my turn this weekend with my mama…Happy Spring!

What a great story. I've never had pink soup, but it looks delicious.

Your pink soup looks lovely! It is just right for spring. Have fun with your family.

How gorgeous! And Bill ate beets, yay 🙂 Sounds like real fun times at the Tartelette kitchen.

Bridget could never pull something off so eloquently as you! I'm officially a fan of pink soup. Beautiful, as always, Helen. xo.

Perfection! Your words and your gorgeous photos always blow me away. Now to try the soup :>)

Wow!
Such amazing pictures …. both food and pictures are very appetizing .. yummi;)
Inspiring!
Compliments from here

the prettiest soup I've ever seen!

The pink soup is absolutely perfect for early spring and Easter!

I love it and I've never made pink soup before either! What a fabulous idea 🙂

I think your pink soup is stunning! My mom used to make pickled beets and I couldn't even be polite and gag them down. It took me a while to try them and now I am fascinated with them. The color is just so beautiful.

I think it's great that your husband knows the lines to Bridget Jones's Diary!

Also, I think that including the beets just made for a more beautiful soup to photograph. That first picture is absolutely amazing! The colors are just wow!

Ha ha, pink soup! This reminds me of a roasted veggie soup that contained beets. It ended up bright red! People kept asking me where the pasta was. I found that after eating it a couple of days in a row, it had some interesting ummm…after effects.

Lovely pink soup! Wonder if my kids would find it extra special with that color…need to try. Really like the extra touch with the thinly fried slices of Sunchokes. Beautiful post!!

i was thinking just today that i wanted a good root vegetable soup recipe, then i saw this. thank you