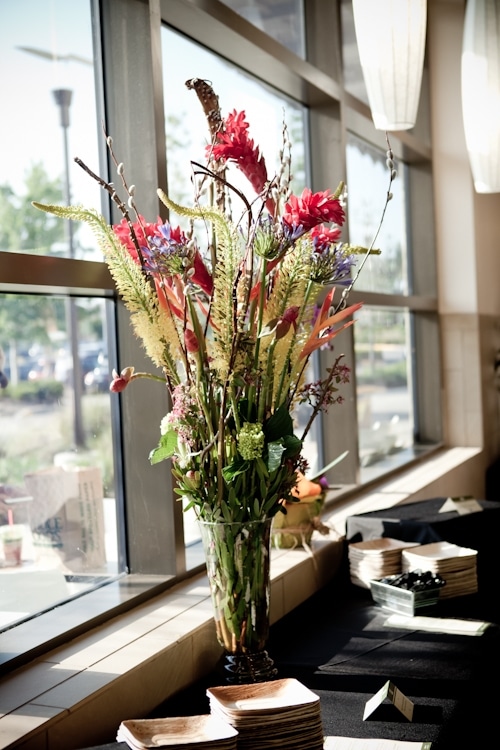 Hard to believe that just last weekend I was in lovely Florida teaching a hands-on photography workshop to a great bunch of bloggers or food enthusiasts. That Sunday was just the icing on the cake actually of an already darn good time in Orlando where I had come to speak at Food Blog Forum (FBF).

When Jaden asked if I wanted to be part of FBF Orlando for the photo sessions, I did not hesitate long. Jaden’s energy, kindness and genuine interest in people know no boundaries. She’s always been great of great counsel to me and I always feel relaxed and smiling after a few hours in her presence. After the intense rhythm of the past 6 months I needed to relax. Mapping out the next six months made me realize it was now or never to give myself a mandatory break. 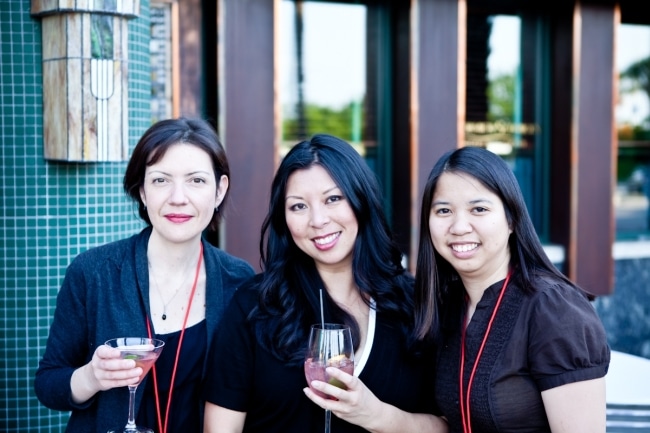 With Jaden and Julie.
I was thrilled to see Julie again and let me tell you, she deserves a long line of kuddos, and “thank yous” for organizing the event so successfully. Not only did she organize the main event on Saturday but she also helped put together an extra hands-on worshop on Sunday for people who wanted to practice more or could not make it to FBF the day before. Thank you Julie!

It does sound cliche but I was thrilled to see familiar faces as well as finally meet the people behind my weekly reads. I love this community. Food bloggers are the best! The generosity of the food community in Florida is awesome. It made me even more excited to be back that way later in the summer and I am looking forward to seeing those wonderful peeps again.

The weekend kicked off with a little mixer/get together at Whole Foods where we were showered with attention, food and wine. Everything from small savory bites, chocolate mousse in chocolate cups to live cooking demos. Every one had the chance to mingle and introduce themselves as well as get all revved up for the next day’s events.

Indeed, Saturday was packed. I love events such as these because there is always something to learn, something to contribute and something to walk away with whether you are a speaker or an attendee. It was like a grand big talk where everyone was at ease to speak, listen and as questions. 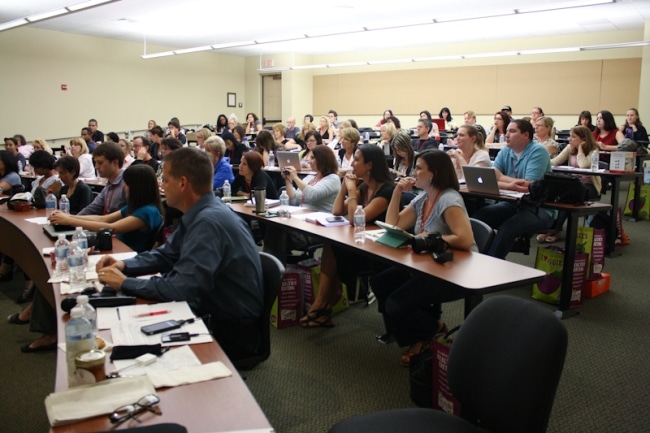 Picture courtesy of Julie at The Little Kitchen.
It was a treat listening to Jaden and Scott, Jeff Houck from the Tampa Tribune, Heather McPherson from the Orlando Sentinel, Peter Scott from Izea, Lindsay Landis from Purrdesign and Dawn Viola from Wicked Good Dinner. Tons of topics were covered so that everyone could find something that pertained to where they were in their blogging journey. Branding, working with newspapers, working with brands, SEO, blog design, and photography and styling.

My presentation was broken in two parts with the first one covering basics of camera modes, natural and artificial light while the second part was a live composition and styling demo. I focused the demo on two items, one was a pretty and colorful mixed salad and the other a goopy brown scoop of sun dried tomato and white bean spread. I took the group through my thought process for composing my shot and styling the food just as if I were at home working blog or in the studio with a client. 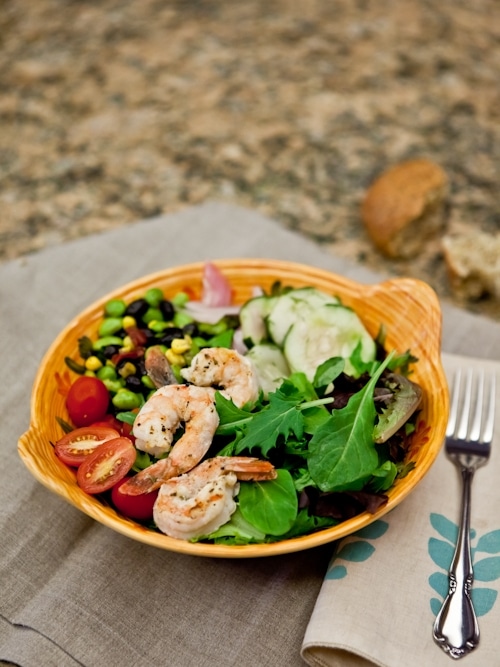 Here is a recap of the styling photo composition session. Bear in mind that these were just decisions I took on that specific occasion. I am in no way saying that these are the decisive steps to style salads or dips. Every time I style salads and spreads I find myself doing it in a myriad of other ways:
– The salad was to be composed of mixed greens, mixed bean salad, cucumber salad, grilled shrimp and grape tomatoes.
– I decided not to scatter the ingredients all over the salad because they would get lost and would make it hard for the viewer to tell what was what.
– Instead I created small clusters of each component and placed them on the outside so that the bulk of the greens would still be visible and indicate it was a salad indeed.
– I cut a couple of the tomatoes open to add visual interest with a different angle and cut.
– I did not have vinaigrette for the salad but if I’d had some, I would have waited until the last minute to use it on the salad to keep the greens as fresh as possible.
– there were only white plates or rustic yellow bowls available as props (I had brought linens and my styling kit).
– I picked the yellow bowl to play with the all the colors of the salad components and it complemented the linens and surface I was working on.
– kept a 3/4 camera point of view so that I could show the bowl in its entirety without any weird angle and without being too “in your face” which is not helpful when you are trying to see the bigger picture.
– I picked and a medium depth of field, not too shallow that you could not tell the ingredients apart and not too deep that they were all in focus. It helped hide the fact that the cucumber was a bit passed its prime too. 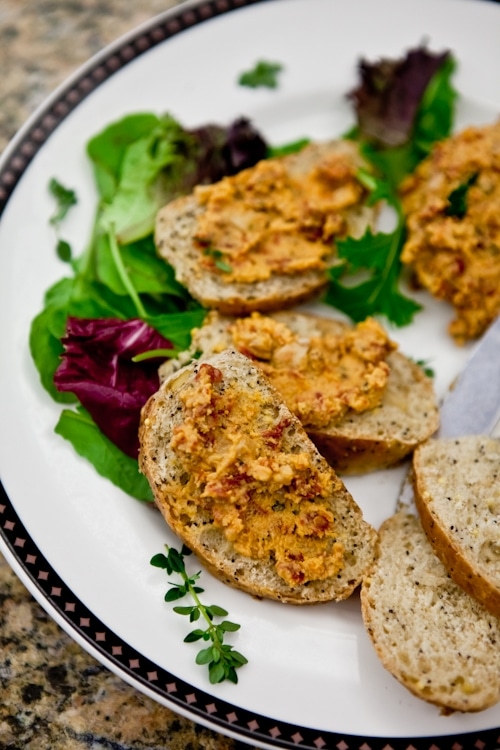 The spread came from a standard grocery store plastic container which I decided not to keep for aesthetics reason and instead decided to show what one can do with a “goopey mess”.
– Instead of plating a mound of spread, surrounded by bread slices and a few salad leaves for garnish, I decided to show a progression and use the spread in action so to speak.
– it allows one to play with shapes and angles and not be restricted by just one direction and composition.
– Spreads and dips are less difficult to style and more interesting to shoot if you make them do something.
– I placed a large spoonful of the spread on the side as to show my starting point
– I cut out some slices of bread and spread some of the dip on half the slices, leaving the remaining half without to show that there were still plenty to be used.
– I left the knife on the plate to reinforce this idea of movement from the starting scoop of dip to using the bread to eat it with, etc…
– I used a spring of thyme as it was part of the herbs listed in the ingredient list and it added a nice touch to the plate. I could have scattered more around but it was not really necessary with the view point I wanted to try for taking the shot.
– I went with a closer/tighter camera angle and viewpoint than the salad because there was no reason to show more of the spread/dip than necessary. It was not pretty in its natural state so it was best to focus on the best toast with dip on it.
– I chose a shallow depth of field to keep the background element of more spread and bread which were not that visually interested out of focus but still part of the plate. 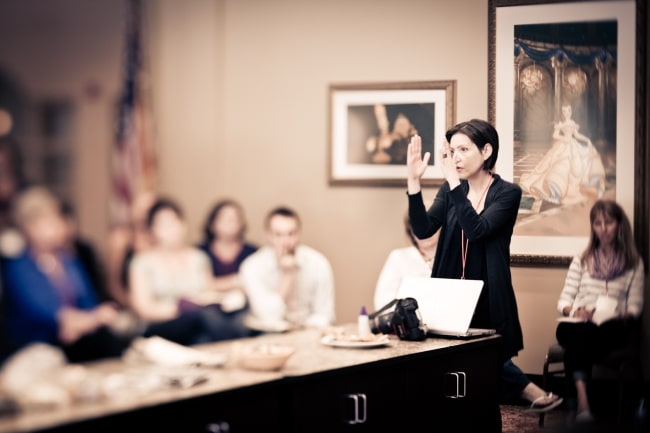 Picture courtesy of Christian Stella.
Beside picking out the ingredients to style, I did not think a whole lot about what I would do until it was time to do the demo. I wanted to keep things as spontaneous as possible and talk participants through issues or decisions as I was encountering them myself. It also showed them that there is no trick or scientific formulas behind all this. The magic one creates is nothing but a series of decisions and attempts. I also stressed out that this is what I went for that specific day but I could have gone many different ways on many different days depending on light, props, ingredients, time, mood and feel I wanted to portray. There is no wrong or right. Just do what feels sincere to you.

That was the focus of the Sunday workshop which took place independently from FBF. I pretty much let the group lose at Whole Foods (!) to pick a few items to style and we went more in details about camera modes and angles, natural light and how to use its different sources for different purpose, diffusing, bouncing, speedlight and studio light for those who have to shoot late at night. After that everyone styled and composed a shot and I went around giving tips and techniques they could also use. 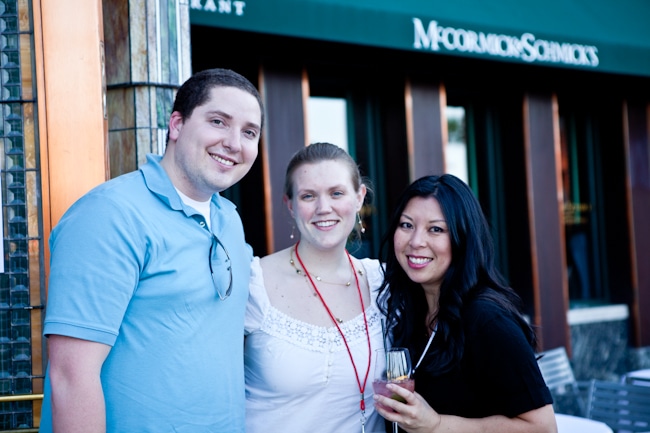 Adam and Joanne from Inspired Taste with Jaden. After the Sunday worshop, they surprised me by asking if I’d mentor them in photography. I said “of course!”…of course!
My goal was to give them as many tools as possible whether they decide to use one or ten. Knowledge is power. So is coming up with your own visual identity. I was thrilled to have 12 participants come up with 12 different ways to view their relationship with the camera. What a breath of fresh air! It was the best 4 hours spent before an airplane ride back to Charleston.

Thank you to all the people who attended FBF! If a Food Blog Forum comes close to you one day, hurry to be part of it. You won’t regret it. You can read more opinions, recaps, thoughts and takeaways on the event at the bottom of the Food Blog Forum Orlando page, here.

It’s another packed Sunday here with friends as well as scheduling work and we are all in the kitchen making Sangria, one of the drinks served at the FBF Saturday reception held at McCormick & Schmick’s. I was so busy playing that I forgot to ask them for the recipe but I knew that my buddy Taylor had a scrumptious one on his blog. Head after the jump to read more about it.

The winners of Super Natural Everyday by Heidi Swanson are: Avery at Love Veggies and Yoga and Janna from Knitting Relaxes Me. Email me your mailing addresses at mytartelette [at] gmail [dot] com so I can pass them on to the publisher. Congrats!

Save one of the blood oranges for garnish. Squeeze the juices from the remaining oranges and combine with the blackberries, wine, honey, Grand Marnier into a large pitcher or punch bowl. Stir the mixture until everything is combined.
Chill the sangria over night. Right before serving, cut the blood orange into thin slices and add them to the pitcher or punch bowl. Serve cold.