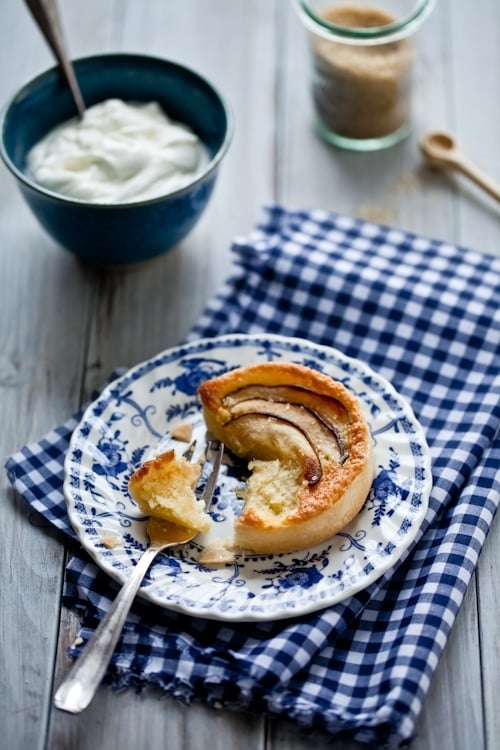 It’s been a week of catching up here since New Year. Catching up on family, catching up on friends, emails, snail mail, thank you notes, love notes. The holidays have been so busy and wonderful that every bit of everyday is truly dedicated to organizing. At the end of the day, feeling both mentally spent and elated, we welcome a little break and a treat.

It does not have to be anything fancy or sweet. Sometimes it’s just a slice of bread and some honey, a couple of cookies, a piece of bread and a cracker, etc… Sometimes, it’s a treat I made specifically for a tea break. Sometimes, like the other day, it was pulling ends and pieces together to make something utterly scrumptious: Pear and Almond Frangipane Tartelettes. 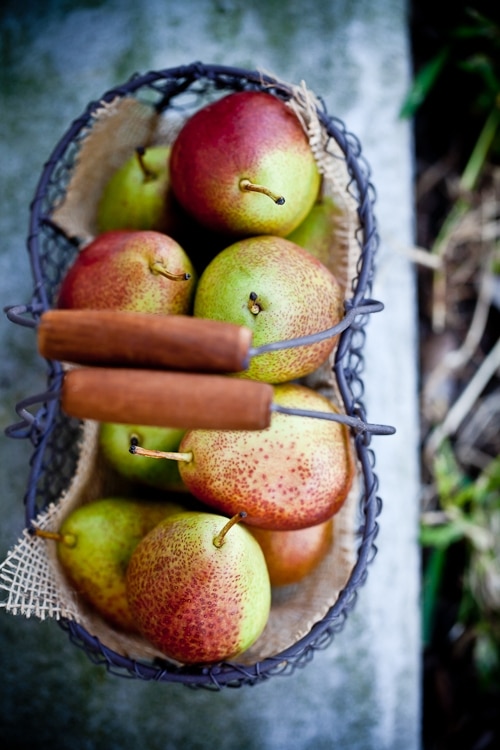 On New Year’s day I made all the traditional Southern foods since my in-laws were coming over such as ham, black eyed peas, collard greens, biscuits, etc..I also added one of my family’s traditions by making a galette des rois with gluten free puff pastry. I know I was a few days early, but that’s how it goes in my family because of everyone’s travel and work schedule during the holidays. At least, we make time to gather, eat a piece of galette and have a glass of Champagne to toast the new year.

This NY Day, I made more frangipane than I actually used in the galette so I parked it the fridge. I did consider eating it with a spoon as it was if you must know. There is something about frangipane that is just creamy enough and rich enough to make me forget reason… 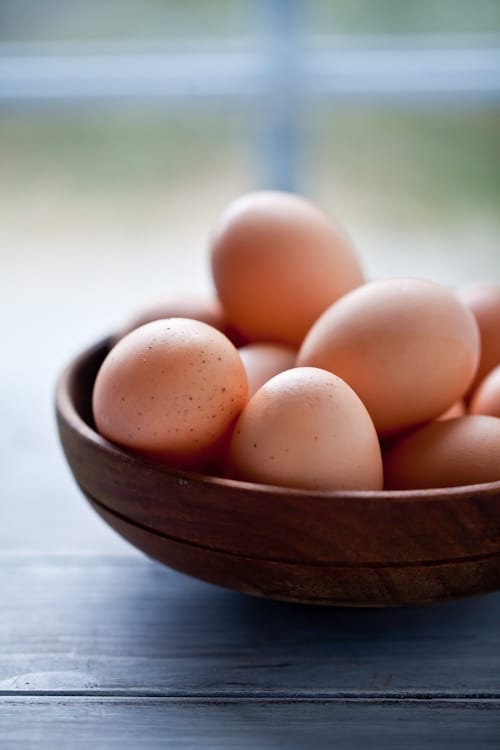 It took a couple of extra days and I had all the elements necessary to make proper (read dignified) use of the frangipane. Some very ripe pears, some pastry dough saved over from making quiche and these little tartelettes were born. We barely waited until they were cool enough to share one during a little mandatory work break.

I am just very sad we are both starring at the last one right now! Have a great weekend! 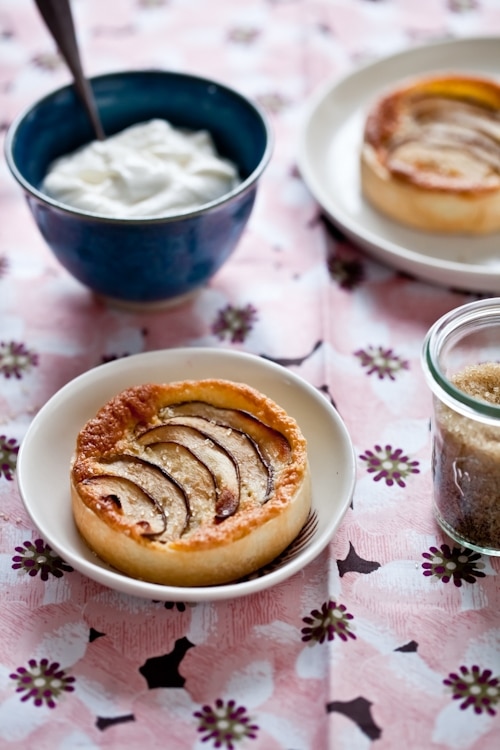 Makes six to eight 3.5-inch tartelettes or one 9-inch tart

3 medium pears, cored, halved and thinly sliced (I left the skin on but feel free to peel them before hand)

Prepare the crust:
In a mixer, whip the butter on medium speed until light and airy. Add the egg yolks, one at a time and beating well after each addition. Mix until incorporated. Add the salt, and all the different flours, and mix briefly. Add some water or milk, one tablespoon at a time if the dough feels too dry. Dump the whole mixture onto a lightly floured (use more rice flour) board and gather the dough into a smooth ball. Flatten the dough into a disk, wrap it in plastic wrap and refrigerate for an hour.
Preheat oven to 350F and position a rack in the center.
When the dough is nice and cold, roll it out on a lightly floured board or in between two sheets of plastic to fit your prefered pie pan or eight 3.5-inch tart rings. If the dough tears while you roll or/and transfer into the pan, just patch it with your fingertips. Line the dough with a piece of parchment paper, fill with pie weights or dy beans and par bake for 10 minutes until almost partially baked. Remove the weights and parchment paper. At this point you can refrigerate the baked crust for up to 5 days before using. Let cool while you prepare the filling.

Prepare the frangipane:
Place the butter, honey, ground almonds, and the eggs in a large bowl and whisk until smooth (can also be done in a food processor). Add the cream and cardamom but stir in it instead of whisking not to emulsify it or it will rise while baking.

Assemble and bake:
Divide the frangipane among each tart rings, add a few slices of pears right on top (no need to push them through) and bake for about 20-25 minutes until golden brown.

We like ours with creme fraiche and a bit of vanilla sugar.

A Tamarind Beef & Kohlrabi Salad and A Brand New Year!

Mmmmm, these look so so yummy! I love the combination of pears and almonds, especially this time of year. Glad to see in the instructions that I could do this as one big tart rather than little ones since I don't think I have enough little tart pans…sounds so yummy. Will have to try this when I get home from vacation!

So pretty. I love the gradations and tones of pears.

beautiful! I love pears, especially with almonds, in desserts.

I love pear and almond together, especially in a dessert:)

I am enjoying looking at your photos in Carrie's book. Every picture is a true piece of art. Beautiful work! Thank you for sharing your talent with all of us.

Pears are my favorite ~ especially when mixed with almonds! You are right, a definite welcome afternoon treat!

That last tart looks delicious. I love the photos you took of the pears and the eggs. Your blog is a such a treat to visit.

You've inspired me: sometime in the foreseeable future I will be making Tartelettes. Thanks so much!!
Jess : )

This looks like it would couple sweetly with some afternoon espresso. I can't wait to try it! Thanks for the lovely recipe.

These look great! I have been using pears a lot lately… in literally everything!

Happy New Year, Helene! Yum, looks amazing! I made my first frangipane tart a few months ago and loved it. Thanks for sharing this version!

good morning and a wonderful breakfast!

makes me want to start baking again 😀 these look so jummy

I love the look of those dotted pears and the pink tablecloth is lovely! I'm going to give these a try this week sometime! Thank you once again…:)—–<

Oh gosh, I can completely identify with wanting to eat frangipane straight from the fridge with a spoon. Irresistable. I love your addition of cardamom, especially given the pear topping!

I agree about frangipane, so smooth and rich… Yummm…

Mmmmm! The addition of cardamom with the pears sounds delicious – these look perfect for an afternoon tea. And a fab excuse to break out the good china!

So funny, I just did the same thing tonight. Not nearly as scrumptiously, I must say! I had leftover crème d'amande from the galettes des rois I attempted for the first time Saturday and just paired it with some canned pears for tonight. We used my preschooler's mini kitchen pans for it. 🙂 Thanks for the beautiful photos and recipe!

Lovely post. I'm impressed that you were able to hold out on eating the fragipane out of the fridge. I look forward to enjoying your delectable dessert.

Your photography is so inspiring, Helene, and these tartlettes are so beautiful. Thank you for sharing your talents in the kitchen and behind the camera!

One of my favorite flavor combination….beautiful

I'm glad you were able to take some time for yourself and cook these beautiful tarts! There is something so elegant about pears, they elevate any dish to the divine, and these are no exception!

These look absolutely divine, Helene, and the photography is second to none, as usual. I'm always inspired by your posts.

Helene, you ideas, recipes an pictures are so brilliant! These tarts are soooo adorable!!!

I made these for a friend and she thinks I'm brilliant now. Thanks for making me look good 😀 Your recipes are always wonderful and your photography is always true art.

I just have to say that your blog is simply heaven! I love cooking and baking and your blog really brings out the artistic aspect of the craft! I love love love every post you put together and always look forward to your delicious recipes!

These are so beautiful–I can already smell the almond and butter swirling around my kitchen. Thanks for the recipe.

They looks gorgeous as always. Love your recipe in the Cupcake Ward Cookbook too, which I bought after reading your bit about it 🙂

Hi Tartelette
I am revisiting one of your older recipes. The one for your birthday girls, A Raspberry Rose Vanilla Cream Cake. So, I made this once before and it was a huge hit. I do have some questions on the buttercream. First, I can't seem to get the temperature as high as 235F. Also, I am getting lots of bubbles in my finished buttercream. What do you think?
Thanks in advance!
Marina

Well you had me at frangipane. I adore this sweet and like you have not only been tempted but yeah, took it straight by the spoon.
Great recipe on the to do list now.

Wow those tarts look amazing. The photography is equally superb! Those tarts remind me of some my Oma(Dutch heritage)used to make…but lol they never looked so neat!

your frangipane recipe is a wonder !!! i love it !!

Hello. Love your blog! You've inspired me to experiment with gluten-free baking. Which is quite a challenge here in the Netherlands. At any rate. I tried this recipe and the frangipane came out…kinda watery. My mans had the same problem. It seemed ok until I added the cream and then it got really watery and sort of broke up.

love that this is gluten free.. yum..

These look lovely! I'm just curious about the crust – could I sub different flours, but use the same weight as listed for each? Or possibly just increase the white rice and millet quantities and leave out the sorghum?