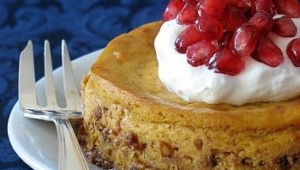 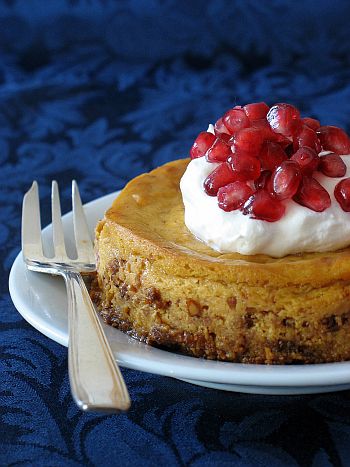 I often post about the most important women in my life, my mother and grandmother but I rarely post about my dad. Why? Because if I did, I would not have many secret left to you…we are very much alike…very much. Sometimes, I find that disturbing because it’s like looking at your personality in a mirror, with all your faults and cracks. See, my dad talks a lot but he never really reveals much about himself. He’s private, he does not ask questions. He’s discreet, he does not want to make you uncomfortable.

All these apply except when it comes to cheesecake….Oh he will be a true gentleman and wait patiently for dessert but then only two words will be uttered by this General: "cheesecake please!" and then I dare you to try to get a bite from his plate. If you have never been met with a cold grey stare, (yep, his eyes are grey, for real), wait until you try to sneak a nibble from his plate. You have guessed it, I am the same…

When I was growing up in France, we did not know cheesecakes. I had vaguely heard of "gateau de fromage blanc" or "tarte au fromage blanc", there were not traditional of my family so it was not until I moved to the US that I had the pleasure of trying the cream cheese based cheesecakes (which can easily substituted with Kiri in France). When I became in charge of the pastry kitchen at the restaurant, I kept the cheesecake on the menu and gave myself a little playroom by changing it every time I had to make a new one which was probably every other day (creme brulee being the most popular, go figure…). I loved the traditional flavor of vanilla, chocolate and berries but I also loved to stray a little with Earl Grey cheesecake, Apple Tatin, and Pineapple Upside Down. It helped that I had an awesome waitstaff to tell me frankly if it was going to fly or not, but one that was sure to hit the spot in November – December was always the Pumpkin Praline Cheesecake. What was best is that I could use up all those giant cans/vats (Libby’s multiplied by 20) of pumpkin puree….useful but not my favorite color at 4am! I could not turn enough of these and every time a friend would ask me to bring cheesecake for dessert, I would *always* bring something else…enough of that thing (and I am not the only pastry cook in this case!). 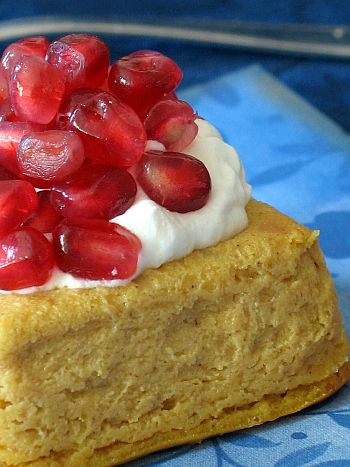 However, with the years going by, I am slowly making cheesecakes again for fun…and my father…and Sugar High Friday this month. Leslie, from Definitely Not Martha has chosen Beta Carotene as the theme this month and that includes "gourds and roots – pumpkin, squash, sweet potato, etc…" So there you have it, I decided to make a yummy cheesecake and pretend it was healthi-er because loaded with good for you pumpkin and topped with even better for you fresh pomegranate. For the crust I just crushed some locally made pecan pralines, and scattered them at the bottom. The recipe makes one large cheesecake but in traditional Tartelette fashion I made four small ones and eight two-bite ones. I wish I could send a couple to my father but he is just going to have to lick his screen…sorry dad!

Scatter the praline crumbs at the bottom of one 10 inch springform pan, lined with parchment paper and coated with cooking spray (or several pans if you decided to go minis).
Preheat oven to 350F.
In a bowl whisk together the pumpkin, the egg, the cinnamon, the nutmeg, the ginger, the salt, and the brown sugar. In a large bowl with an electric mixer cream together the cream cheese and the granulated sugar, beat in the cornstarch, the vanilla, and the pumpkin mixture, and beat the filling until it is smooth.
Pour the filling into the crust, bake the cheesecake for 50 to 55 minutes, or until the center is just set. Let the cheesecake cool in the pan on a rack and chill it, covered, overnight.
When ready to serve, spoon some whipped cream and pomegranate seeds on top. 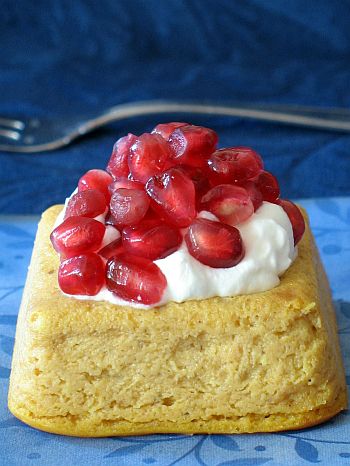 Yes, I do use Kiri here in France. Thanks for this excellent recipe ! Et les grèves continuent, snif snif !

OMG
For breakfast with coffee, yes please. Oh heck how about right now ! I’ll make tea!
The pomegranate is beautiful! and the praline bottom too!

You temptress – love the pomegranate seeds as a special highlight!

They sound divine. I really want some cheescake now!

This looks verrrry tasty! I’m just like my dad too — and I bet we would both love this cheesecake!

I think this is one cheesecake my hubby would eat. Especially with that crown of pomegranate seeds. Beautiful as usual, helen!

i love simple pumpkin cheesecakes, but now you’ve added pralines! oh, goodness; i dont think I’d be able to resist a few servings of this during thanksgiving or any other time! yum

Helen, this looks and sounds so delicious. I love the idea of pomegranate seeds, something I truly enjoy. And thanks very much for joining in on my cooking "show" yesterday. It was so much fun and your sense of humor is terrific! Hugs…

I love cheesecake – and my mom loves pumpkin cheesecake – so I may have to try this one! And I agree, the pomegranate seeds are a beautiful and classy touch!

(As I am wiping the drool off of my keyboard…) That looks heavenly. And please post your recipe for Earl Gray cheesecake sometime. I am truly intrigued by this innovation.

You make it sound so simple. Cheesecakes are tricky, at least for me. I have tried them once and only once :). How many mini cakes did you make? This is to scale down the recipe.

So beautiful. Love the pomegranates on the top. Your dad has good taste in desserts. This makes me wanna finally get over my fear of making cheesecakes again.

I would have never thought to top this with pomegranate seeds – what a great idea! Pumpkin cheesecake is one of my favorites, so I can see why it was always so popular!

Asking anyone for a bite of their cheesecake is just a bad idea. Looks deelish Helene!

wow, this post really hits home for me – my father and I are EXACTLY alike: we look alike, think alike, act alike – just, we’re alike, period, haha. this Pumpkin Praline Cheesecake is a wonderful tribute to your father :0)

I really like how you topped the pie with those gorgeous pomegranate seeds. What a nice touch!

Sounds good! I like the use of the pomegranate seeds on the top.

Hi! I am also glad we met yesterday at Kelly’s show. Your blog is amazing. That cheesecake looks delicious. I make a pumpkin flan with cream cheese and honey. Anything pumpkin-y turns out great.

I have a question about the pecan pralines…the ones I’m used to are candy- is that what you mean?
The cheesecake looks great!

They look fabulous!!! I have just been reading through your site (when I should be doing my work!!) It is fabulous!!! You have so much talent!!! I am a new addict!!!

Well, you know how I feel about cheesecake…and pumpkin…so YUMMY!

That’s an excellent presentation for your pumpkin praline chhesecake, Helen – I love the color contrasts of the yellow of the pumpkin and the ruby red of the pomegranate seeds on the rich Blue backdrop. Sublime!

Great textures going on here, Tartelette – I love it.

Who knew pumpkin praline cheesecake was just a crazy combination of ingredients, but actually something served on restaurant menus! The pomegranite on top does look just lovely.

This looks AMAZING. For something so rich, it actually looks really light and fluffy! I want a slice right now. 🙂

I’ve been following your blog for a bit now–everything is always amazing! I am in awe, please continue your culinary magic always!

Helene- Your cheesecake looks to die for! Who could resist it!

Thank you so much for your sweet comments to me earlier. I was reading your post about your dad with envy. Treasure every moment that you have with him. I would give anything to have just one more day with mine.

Have a very happy Thanksgiving.

Your desserts are perfection…they always look ready for their "close-up" and sound absolutely delicious to boot! 🙂

I’ll join your dad in licking the screen. These look beautiful and delicious as well. Well done, as always.

Just found your blog. I love the narrations that accompany your recipes, your voice is funny, and you just saved me by telling me that Kiri can replace cream cheese in France!