Peanut Butter Banana Chocolate Cupcakes aka Heaven on a Plate 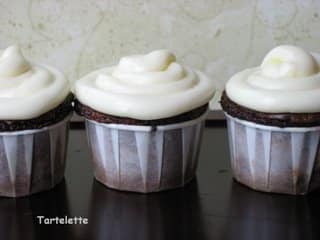 See, Mr. B has an issue with bananas: he only eats them if their skin is green, pale yellow or with very few blacks spots. He won’t touch them if they are getting soft or old. Even if I go to the store rather regularly, I usually grab 4 or 5 for the week instead of one each time and by the end of the week there are always 2 left that the man won’t eat. Although he likes my banana pie, I try to come up with other recipes. I did not want to make banana bread or banana muffins, I wanted to find a decadent cupcake recipe. I don’t make cupcakes often, but this time I had an audience (the husband, the neighbors, their boys….almost everybody on the block!). I decided to go to one of the best cupcake resources I know of in the blogging world, Chockylit at Cupcake Bakeshop. I did a search for bananas and found the recipe I wanted: Peanut Butter and Banana Chocolate Cupcakes with Caramel Frosting. Just the title makes me salivate! Since I can’t do everything exactly the same and since I had half a block of cream cheese leftover I decided to make a cream cheese frosting instead of her caramel one, but I am willing to make these again with the caramel! They are out of this world. Fudgy, dense, peanuty, just plain decadent! I made the cupcakes in the afternoon and frosted them the morning after. I left a bundle on the neighbors (3 houses) doorsteps.

You can find the original recipe here (scroll down, it is the second recipe) and visit her blog at the same time. I drool at her recipes, pictures and creativity. She is my cupcake hero!

I am not going to copy the caramel glaze recipe, but will give you mine for the cream cheese frosting:
4 oz cream cheese, softened
1/4 stick butter, softened
2 cups sifted powdered sugar
milk if necessary to make the frosting to your desired consistency
Whip cream cheese and butter together, add powdered sugar, mix well and add milk if needed.
I have to admit I usually wing that one because I make it so often.
I notice that Cheryl makes it the same way.

These were made yesterday and they are gone! I found a straggler this afternoon
and into my belly it went (ah the joys of blogging, I am going to have to start running again!)

Nice cupcakes… I am exactly like Mr.B, I only like bananas when they are green or pale yellow… I do not like them when they get too sweet.
Ciao.

I too think that bananas are best when totally yellow. Any brown doesn’t taste right unless in baked goods! These cupcakes look great! I love banana and peanut butter together.

Hi Helene,
I’m addicted to your sweet food:P
I’m attracted to this recipe, coz I wanna use up my peanut butter which has been in the fridge for way too long. This recipe sounds really tempting.

p.s: Hope you don’t mind but I couldn’t resist linking you:)

i had some bananas and they were starting to get brown. so when i saw your cupcake recipe i couldn’t resist baking them. They were so easy to make. They turned out wonderful. They were super moist and the flavour was so delicious! Perfectly balanced and to to sugary. They made my day! Thank you for posting them!!

Oops i made a mistake on my last comment… I meant: not to sugary