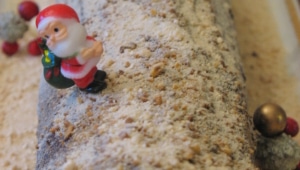 You probably have wondered where I have been hiding since we came back last week. Truth is, I have started this post a million times and erased it just as many. I never thought it would be so difficult to jump back into blogging after three weeks off. Between bad internet connections and entertaining friends and family since our coming back, it has been difficult to sit and write for more than a couple of minutes at times.

I have to say that this is the first time that I experienced culture shock "the other way". Up until this year, I still felt that things were familiar to me and I was just away for long periods of time but having culture shock moments as a French in America. Well, this year felt very different and I think that because I am fully at ease with my new country and adopted people that I experienced the opposite kind of "moments", you know, when you pause and scratch your head, curious to know whys, whos and wheres…Funny how life is…

I have to apologize for the poor quality of the pictures accompanying this post, but most shots were done on the spot, either in a hotel room (sometimes bathroom) or on the dining room table. No time to stage and plan!

We have had the most wonderful time in France. It was a true blessing to see as much of my family as we did. Every minute of every day was filled with things to do, people to see and places to visit. We were lucky to be staying with my parents in Le Mesnil Saint Denis, not far from Versailles and being so close to the things we had planned to visit.
We started by an amazing show in Paris, Le Quatuor, where both B. and I laughed our heart out.
The next day, we were leaving for Normandy where we saw the Mont Saint Michel, the beaches of D-Day, the American cemetery, the Bayeux Tapestry, the Memorial of Caen, and dined on fine foods and wine.

We returned home to prepare Christmas and welcome my brother and his family. Words fall short to express the joy it was to see my nieces Lea (6 years old) and Camille (4 months). Each day was filled with laughs, games and pranks!

Food wise, I have to say "hats off" to my mom who had prepared great food ahead of time and who nicely gave her kitchen to her son for the main course of Christmas dinner, a capon with a white boudin and truffled stuffing, and her daughter for dessert, a traditional praline filled Yule Log and a Nougat & Rapberry ice cream one (sorry no pic of that one). 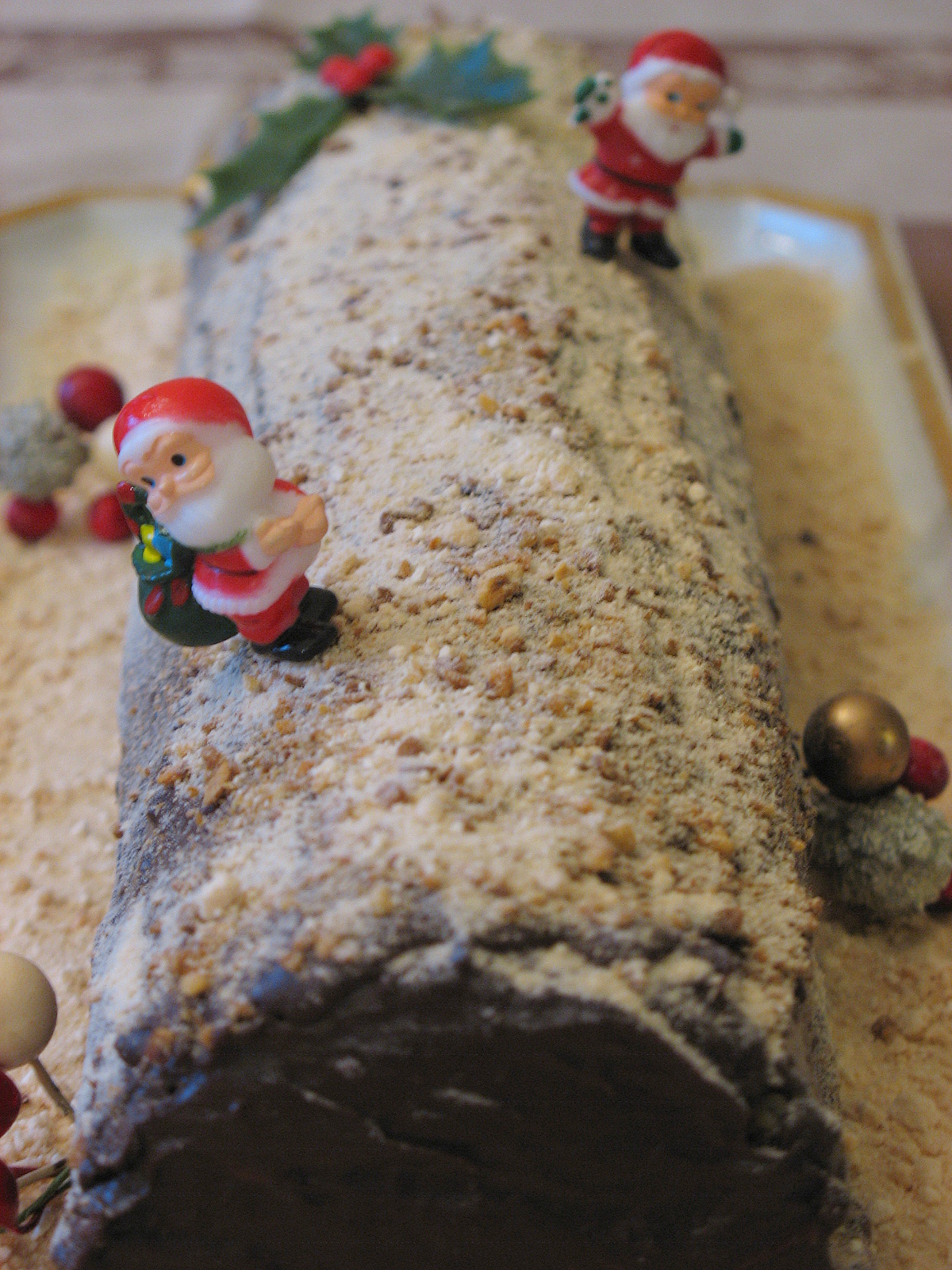 Being the good sister than I am , I made sure he had a bowl of his favorite treats, "chouquettes" 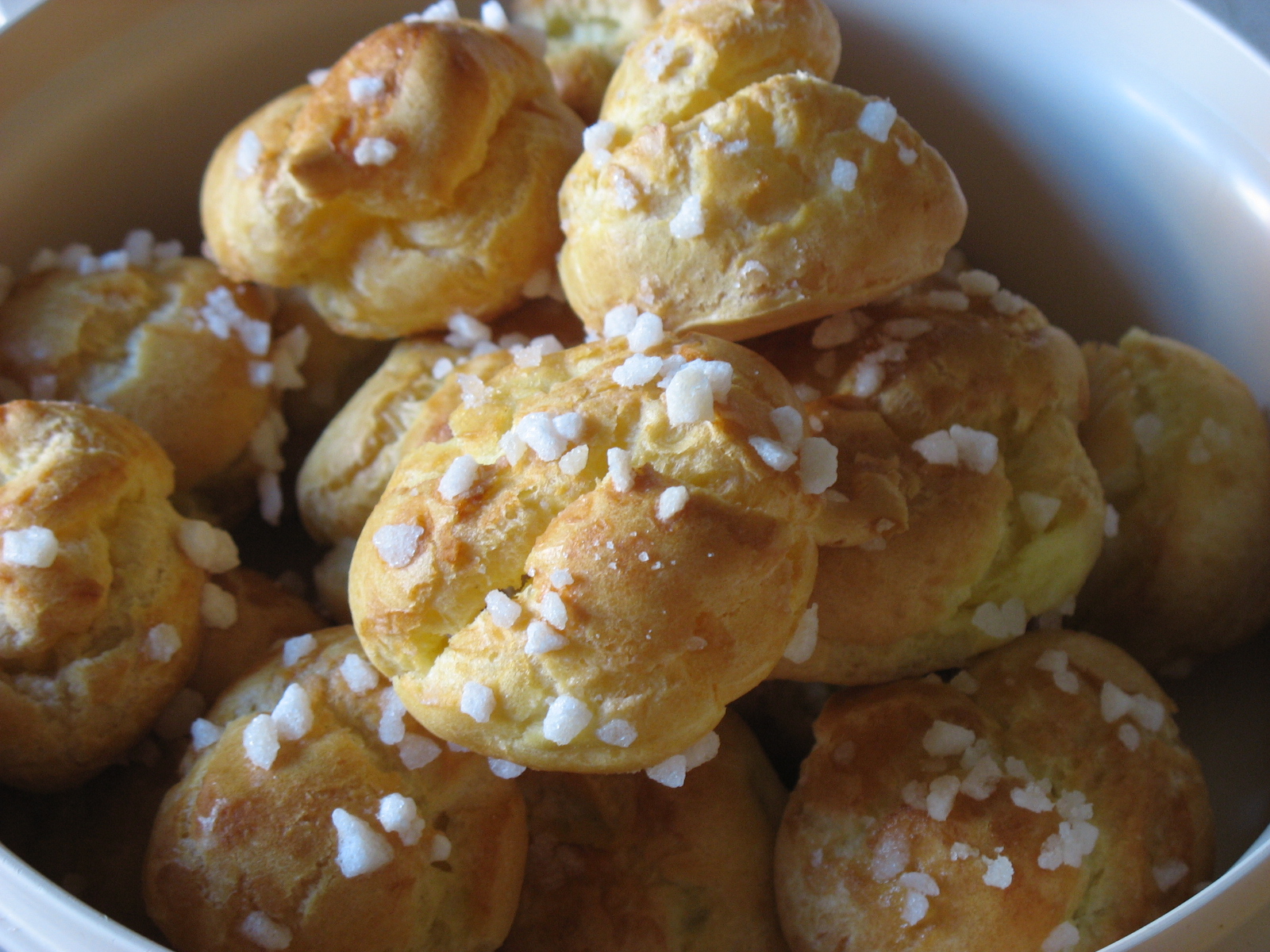 while I snacked on the biggest meringue I had ever had from the patisserie next to our house. 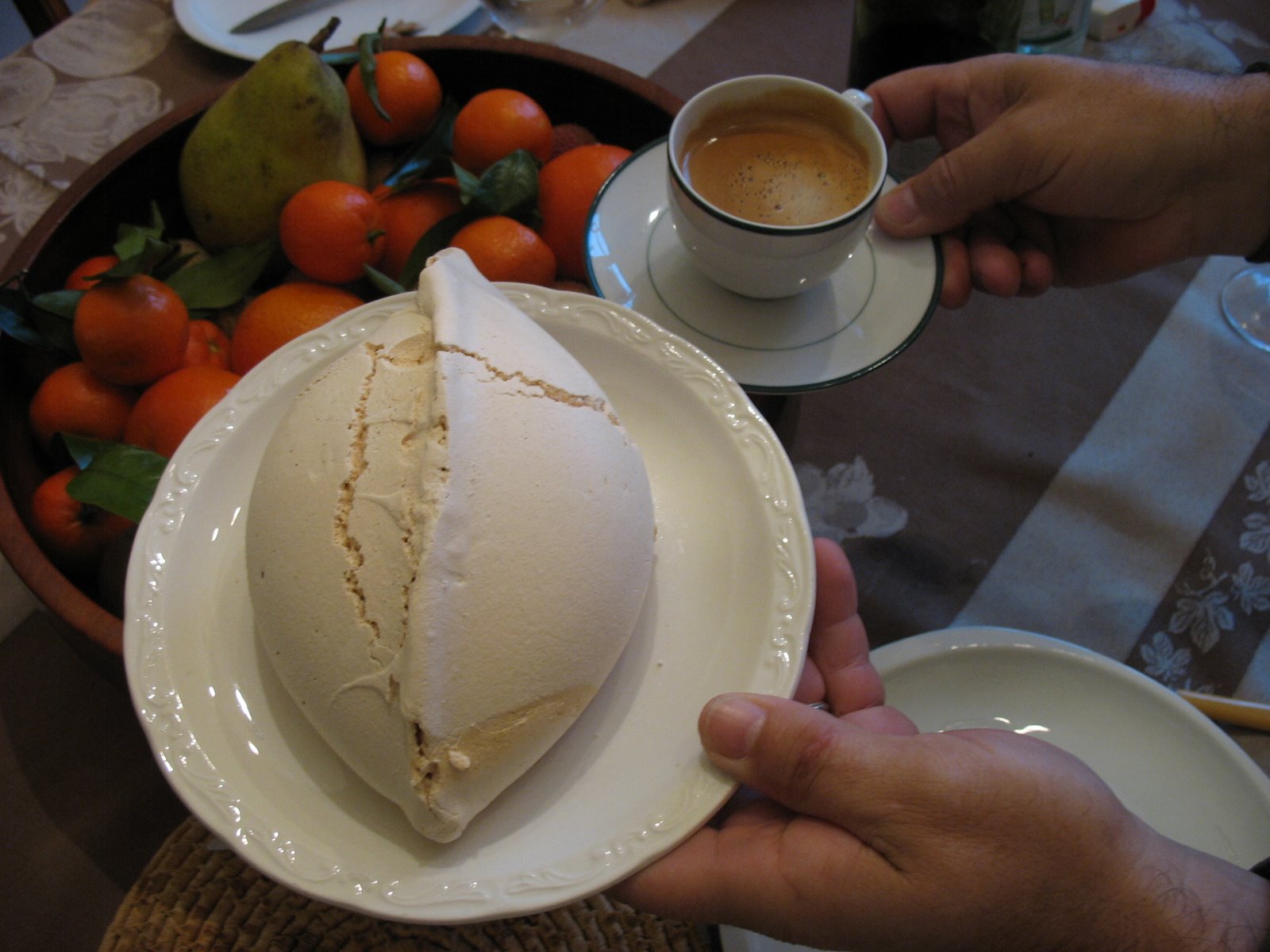 Right after Christmas, B. and I eloped to Paris for a 8 years- late honeymoon during 4 days. We did not rest much during this time as we had paln to alternate visits of museums and pastry shops in a mini 4 day marathon, an Amazing Race of food and knowledge if you will. We stayed in Saint Germain des Pres in a quaint little hotel and made "Neo Cafe" our after dinner, late night spot. Our heads are filled with sculptures from Rodin, relics and gold from Cluny, found treasures from Alexandria at the Grand Palais, Mozart at the Opera. I admit we gave up waiting in line for the Doisneau exhibition at the Hotel de Ville when we were told the wait was 2 hours…outside…and it was freezing cold!

I had told B. about all the pastry and chocolate shops I wanted to see but I did not want to make these 4 days just about what I wanted. I knew there were museums and places he wanted to see no matter how much he also likes macarons! However I did not expect him to get caught in the game of finding these places and some were wuite out of the way! It had been 10 years since my last stay in Paris and I found myself looking at maps and bus stops just like any tourist! Except for the language, everything was just as different to me.

It was virtually impossible to do everything on my list in 4 days (including travelling times) so we went for what was close to us and the museums, parks and neighborhood we had planned on seeing. Literally across from our hotel was Gerard Mulot Patisserie where we filled up on pastries for breakfast, and bought desserts and macarons for my parents…well, I needed an excuse to sample more so we said we would bring desserts back! 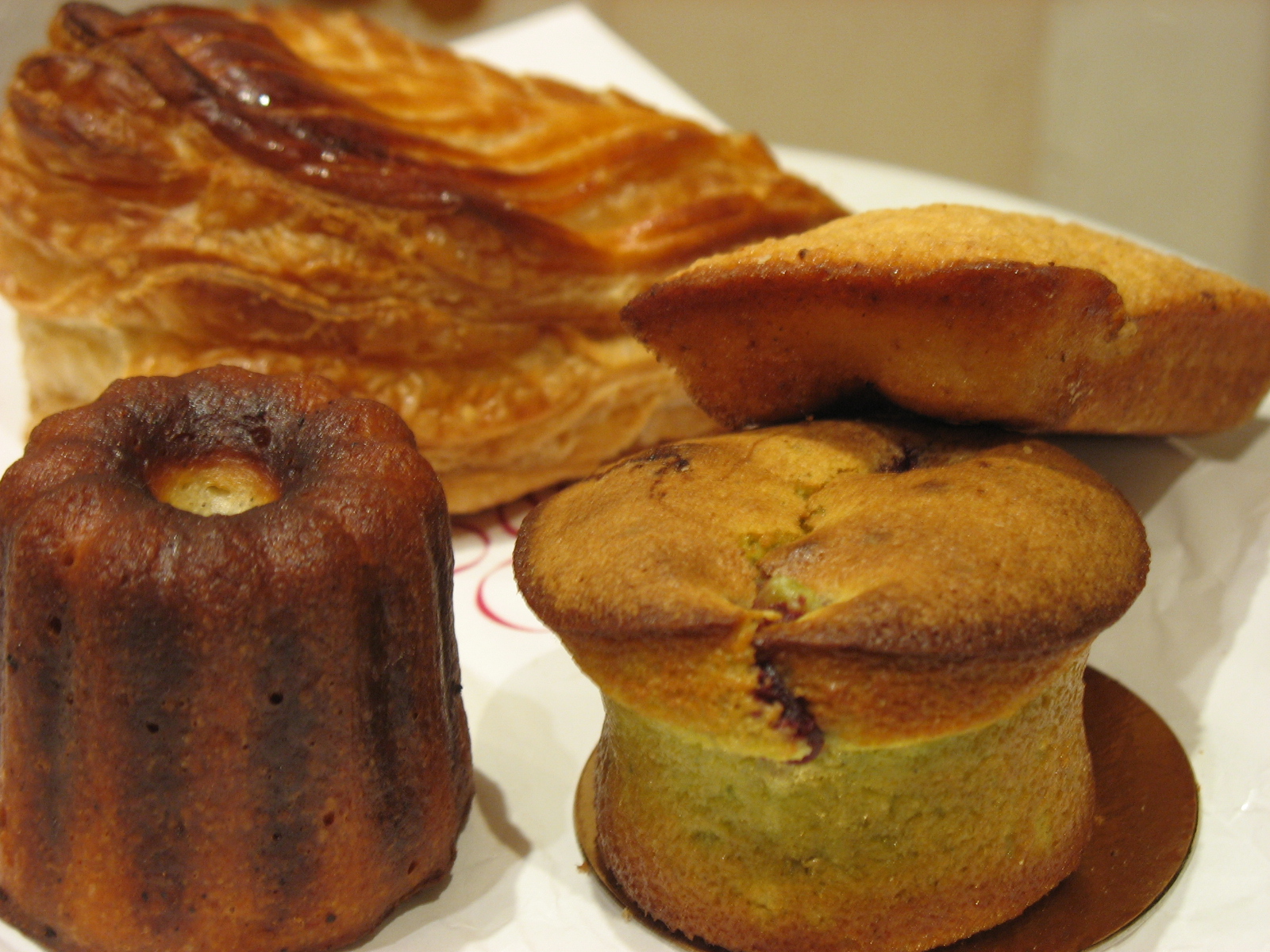 In the background from left to right: "chausson aux pommes" (apples in puff pastry) and classic Financier. In the foreground: cannele, a specialty from Bordeaux, and "cerisai" which is to this day one of the best thing we both ever tested: a ligth cake filled with pistachio cream and sour cherries. Not bad to start the day!

The desserts we brought back included: a Troubadour (top) a shortbread base topped with a salted caramel cream, coffee mousse and topped by a thin shortbread cookie, a Milk Chocolate Ganache Tart 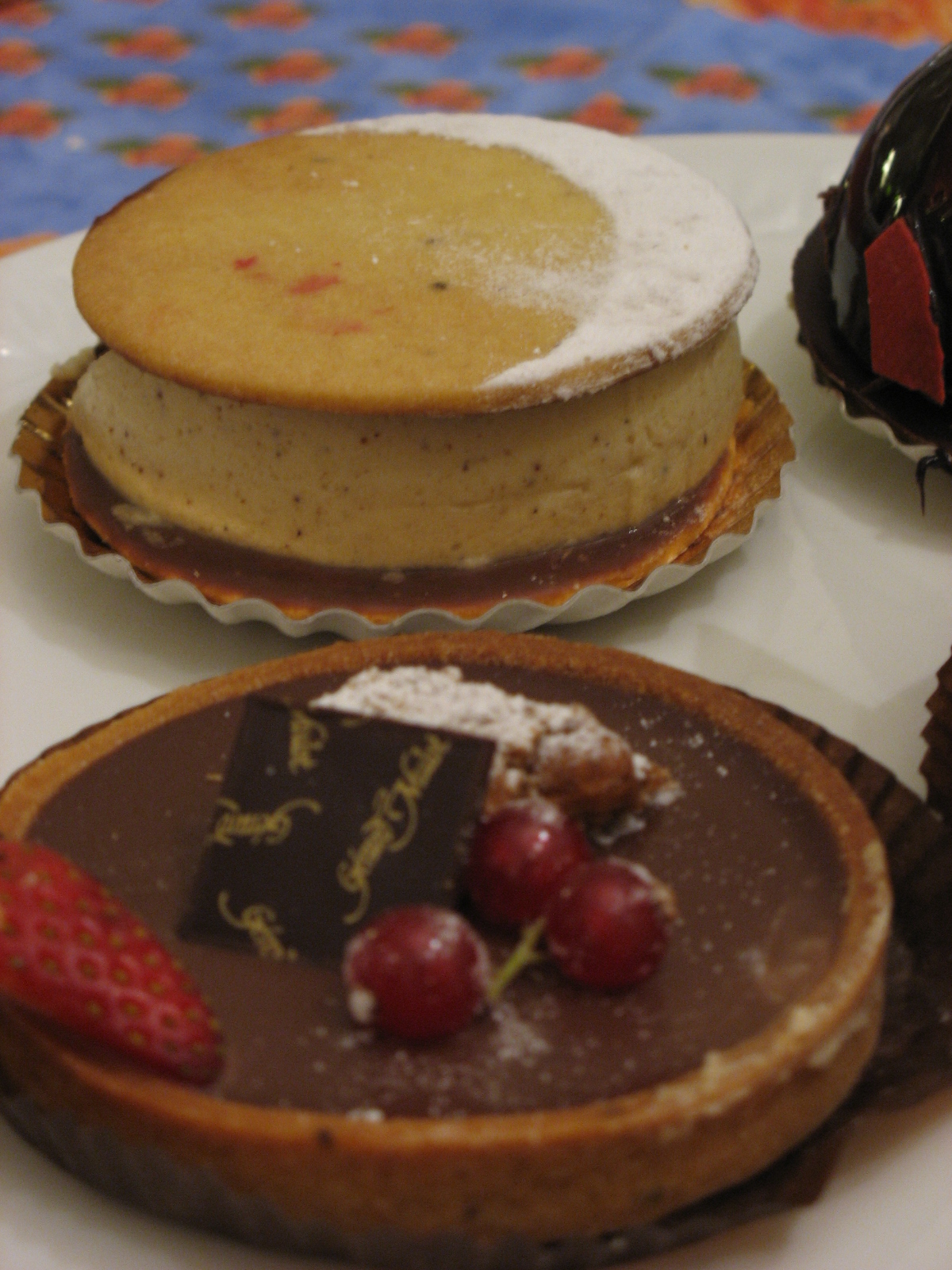 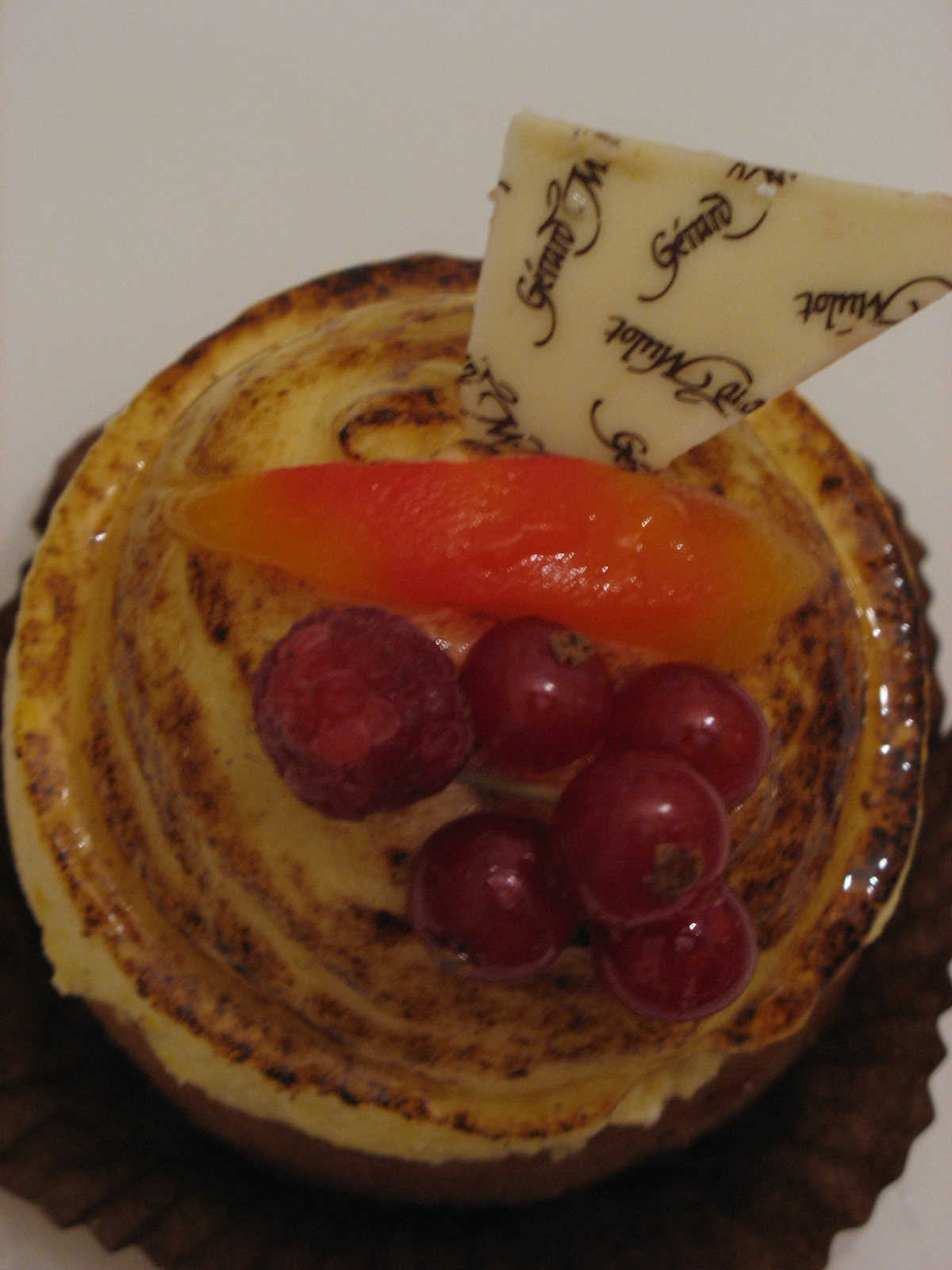 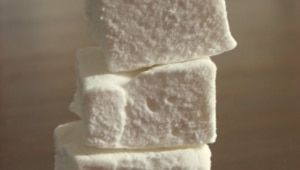 These pictures are DELICIOUS!
And what a sweet hotel – mine is plain vanilla on rue de Seine.
Plus being across from Gerard Mulot! And new treats to discover there too from your pictures.
Merci 🙂

Oh, you do make me home sick for the streets of Paris. Even if I don’t really eat lots of the sweet stuff, I love drooling over it. I most miss the breads.
And your travel north – those are amazing places with their own magic.
I look forward to more.
And the best part is all the family. Your mom sounds so good. Much better organized than I.

Wonderful post! It sounds like a whirlwind of a trip. I’ve never heard of cerisai before but I think it would be delicious, you didn’t happen to bring me any???

I am drooling.. hehehe

I’ve been thinking about you quite a bit lately – hoping you were settling in again!

I look forward to more stories of your trip 😀

Man…this brings back memories of our trip to France 😀

Don’t apologize for the pictures. I think they’re wonderful! And I know what you mean about taking time to get back into blogging. I felt the same way when I got back from my vacation!

Oh my goodness – all the food! I am so jealous, looks like your holiday was a gastronomical delight!

Holy cow…that meringue it the size of a small country!