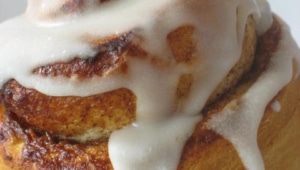 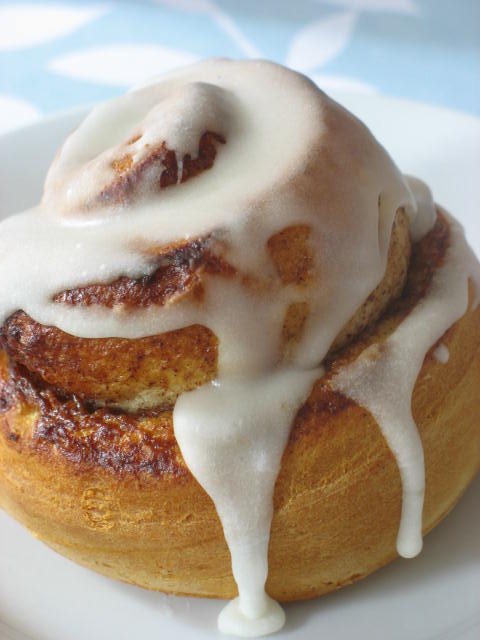 I will be the first one to say that one can never have too many cinnamon rolls! When a sweet somebody suggested after the September Daring Bakers' challenge that we make a go at a recipe for Cinnabons, guess who answered the call of more butter, yeast, dough and cream cheese…and more butter? Yes, your truly as well as Marce, Kelly, Mary, Sara, Laura Rebecca and Chris.

There were a lot of events and gathering around the house that particular weekend and I had to start my dough at the ungodly hour of 5am just to make sure I’d have a chance to get it done that day. Add to the equation a sick dog and a sick Tartelette, and you have me passing out on the couch around 9am while everybody else is gearing up and meeting on Yahoo Instant Messenger to share the fun. When I finally woke up Marce kept trying to invite me to a conference chat and I kept clicking to no avail….I was stuck on my southern side of the world….hate being left out. I IMed my tech guru, while at the same time conversing with Kelly and trying to get her set up.

Now if you know me at all, you probably figure that I can juggle 3-4 desserts going on , at once in the kitchen while entertaining the neighbor’s twins. And if you know me just an ounce, you probably realise that at that point my coughing and sneezing self had 3 Yahoo windows open, emails just in case and everybody typing faster than me. I had the biggest laugh of my life when Lisa asked me to take Kelly through a Yahoo IM set up…me?!!! ahahah!!! Thank god for cutting and pasting her instructions!!

Not to lose her beautiful sweet cool, Kelly had the smart move to quit trying and set up her UStream show, which was a blast by the way. I have a laptop on the kitchen table , you know for when I see a recipe and I have to try it right then and there…. I had Kelly keeping me company while I was baking and decorating cookie trays for a party.

Now that you get a feeling for the ambiance of the day, let’s talk about the real issue here: how did the Cinnabons do compared to Peter Reinhart’s? Both doughs were a pleasure to work with and although Reinhart’s was much softer than this one, they both had a good rise and were easy to roll out. We liked the flavor of Reinhart’s buns over the Cinnabons, something to do with the lemon extract in the dough I am sure. We preferred the texture of the Cinnabons though. The dough remained very tender, a little gooey in the center which I like, a lot. And that filling…hmmm butter/cinnamon/butter/cinnamon…oh yeah and sugar with that butter!

The icing on the Cinnabons really put it over the top, but that had to be expected since I don’t think anything can beat cream cheese frosting. Do you? Then stop reading because you are about to read about a sweet fattening snafu. Since my head was not totally there (cold) I think I got cross eyed for a split second while reading the instructions and instead of 1/2 a stick of butter, I used a whole one! Paula and Lisa would be so proud of me!!!
Since I realized my error before frosting the second pan, I quickly rectified my shot and made the "proper" one. Guess which rolls got devoured first? We are so butter easy !!

Which recipe will I make again? I am pretty sure it will be the Cinnabons but with a little lemon extract in the dough. 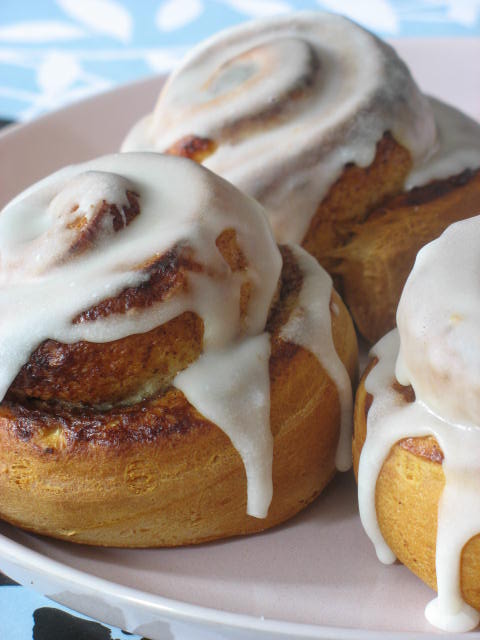 For the rolls, dissolve the yeast in the warm milk in a large bowl
Mix together the sugar, butter, salt & eggs. Add flour and mix well
Knead the dough into a large ball, using your hands lightly dusted with flour. Put in a bowl, cover, and let rise in a warm place about an hour or until the dough has doubled in size.
Roll the dough out on a lightly floured surface. Roll the dough flat until it is approximately 21 inches long and 16 inches wide. It should be about ¼ inch thick.
Preheat oven to 400º F.
For the filling, combine the brown sugar and cinnamon in a bowl. Spread the softened butter evenly over the surface of the dough, and then sprinkle the cinnamon-sugar evenly over the surface.
Working carefully from the top (a 21 inch side), roll the dough down to the bottom edge.
Cut the rolled dough into 1 ¾ inch slices and place 6 at a time, evenly spaced, in a lightly greased baking pan. Let the rolls rise again until doubled in size (about 30 min.). Bake for 10 minutes, or until golden on top.

While the rolls bake, make the icing by mixing the butter and cream cheese in a large bowl with an electric mixer on high speed. Add the powdered sugar and mix on low speed until the sugar is incorporated, then add the milk and flavorings. Mix on high speed again until the icing is smooth and fluffy.
When the rolls come out of the oven, let them cool for about 10 minutes, then coat generously with the icing. 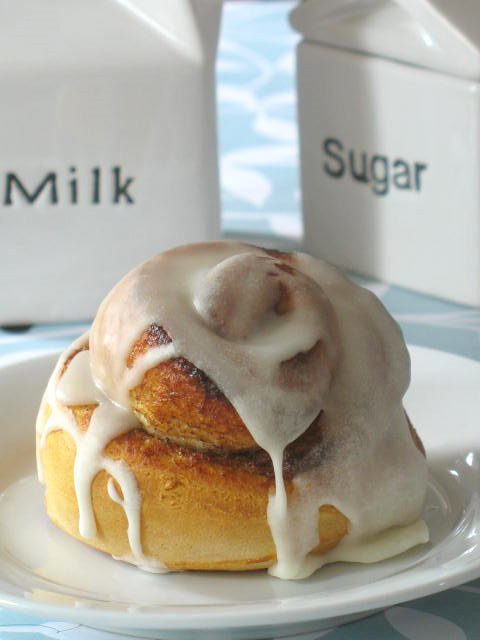 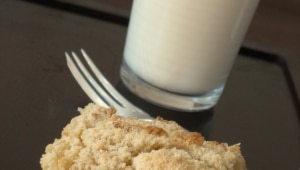 Wow! Yours are great! I love how they rose up a bit in the middle! Makes them look like the real deal.

Believe it or not, I have never eaten in a Cinnabons, but now looking at your knock-off, I’m thinking I should just come to your house instead!

Now I must try them. I loved the Reinhart ones, so if these are better, I must make them.

Hahhaa.. This is really funny, because I made cinnamon rolls today, and I’m posting about them on Monday! hehe.. Yours look delicious!

Those look so delicious and decadent! You’re quite the trooper to make those while you were sick. Making cinnamon rolls can take a toll on a healthy person!

Those make me want to march right into the kitchen and make cinnamon rolls all over again.

Those are some yummy looking buns :-p
It was fun to watch Kelly doing the show on Ustream, I hope we can see more of those shows soon.

I have added you to my blogroll, like I said before, I’ve fallen in love. LOL

I had so much fun that day.. hahaa!! Can’t wait for next time!

Helen, wonderful wonderful looking buns! I am deeply jealous. You know I have such a taste for rich yeasted buns. Will have to refrain from the for a while but I will definitely make these when the time is right.

This recipe if almost exactly like the cinnamon roll recipe I use. One addition is mine has a package of vanilla pudding in the dough. Yummy!

Very elegant as usual, and of course, all of you gals have me craving cinnamon buns yet again…not nice, bikini time is approaching, and fast.

oh, you make me wanna make both versions now!

Oh wow! There is nothing in the world that beats warm cinnamon buns with your morning coffee – except warm Cinnabons! These look beyond awesome! Great Job!

Oh heavens! Just the recipe I need for my bacon cinnamon roll experiments.

Mmm, now I’m torn… I’ve been dying to make cinnamon buns since I saw the Daring Baker posts, but now I can’t decide which recipe to go for… they look so good!

Helen, you were such a trooper to even WANT to bake with us that day not to mention then stick around later with Kelly!

Your cinnabon knockoffs are perfect and I can almost taste it just looking at the lovely as usual pictures!

I’m sorry I didn’t manage to play along with you guys! I really wanted to, but the outside world got in the way! My boss (by which I mean myself) is really strict about clients coming first.

Looks gorgeous, though! Next time I make cinnamon rolls, I will try out this recipe instead of my standard one.

It’s so fun being able to become such great friends with fellow bloggers, isn’t it?? I love it :0)

The original Cinnabon has NOTHING on the way your gorgeous, luscious Knock-Off version looks – WOW!! Another winning baked good, Helene!

You are right, the icing was really the tops. And all that extra butter would have made them even more incredible!

Oh so bee-you-tee-ful, Helene. And it was sooooooo funny to have Lis orchestrating the help Kelly session through you. I loved it and thought it was probably the best part. Well, besides your company on my "show." That was pretty swell, too. Hugs to you for your outstanding support, Techie Tartelette!

I have to admit that I love the Cinnabon cinnamon rolls. I’m so glad for a good knock off recipe!!

Noo…. now I am craving for one of your cinnabon knock offs and I’ve just had dinner! ;D

I’m sorry I missed that call to do the comparison but I’m glad you have included the recipe for me to do my own!
Hope you are feeling better!

ohhh lovely buns! i agree, while i did love the flavor of the reinhart buns, i prefer the recipe i usually use for the texture is just so much softer. i’ll have to try this one though to compare the differences. thanks!

Amazing! I will have to try making these.

Wow.. they look great and I am at work and would love to be home making them!

I have never tasted a Cinnabon in my life. Can you believe that? Such a shame… I must try this recipe on the weekend.

Yes! Yes! And I can even get all these ingredients in southern Italy! Can’t wait to make these 🙂

I have never had 'cinnabon' so I gave these a try – trusting to your good opinion of them.
They were so good. I had to give them away so that I didn’t eat the lot!
I got many compliments from everyone who tasted them.

How does the cream cheese topping do staying out of the fridge? I am in hot Australia. Do you think I could make these and let them sit out for a day, or would the cream cheese make you sick?