Get Your Mousse On ! Donna’s Dark Chocolate Mousse 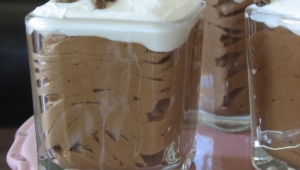 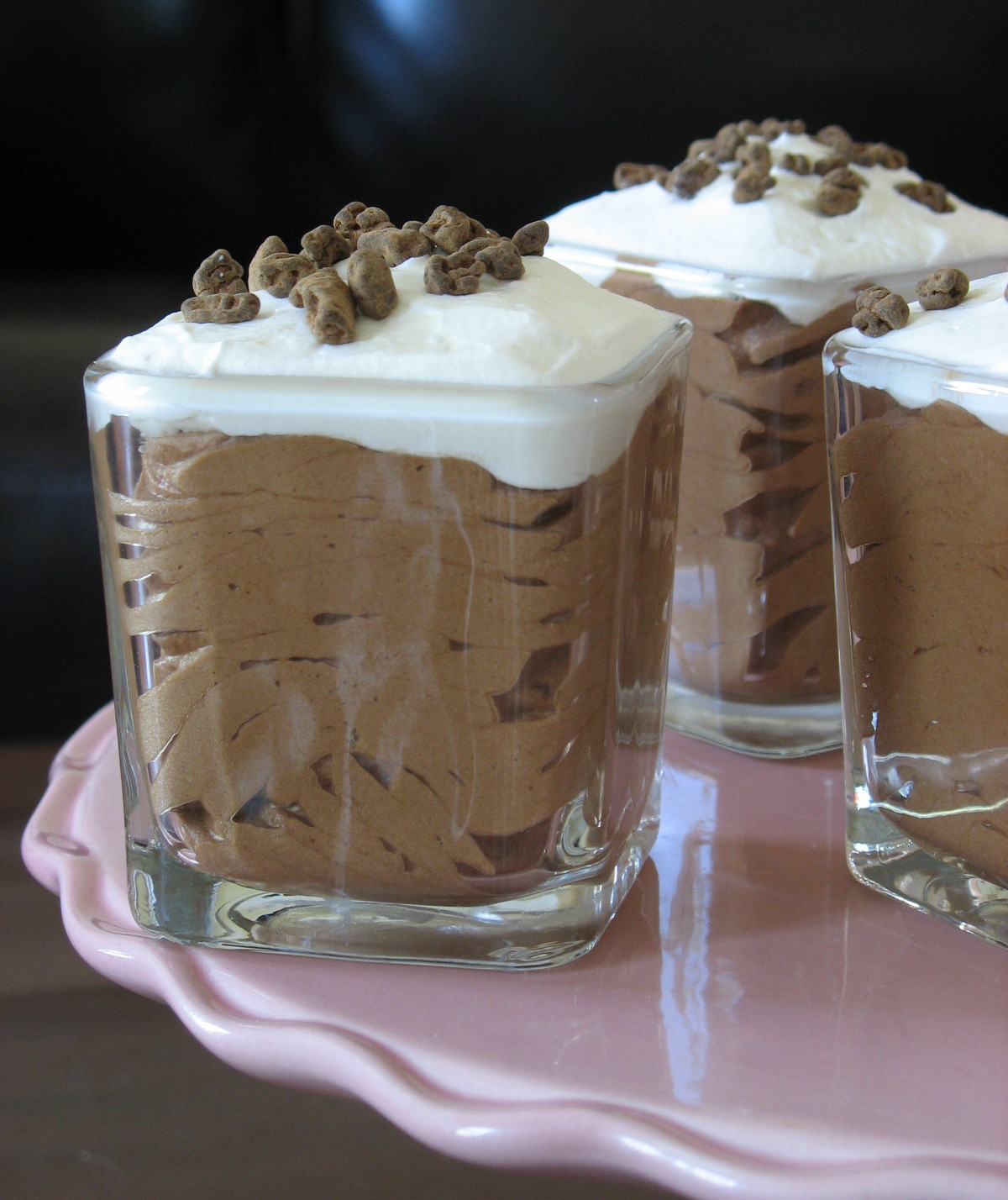 Just a reminder that there is one week left to post and send me your entry for HHDD Mousse!

In case you need some inspiration, here is another one from Donna Hay (thanks Peabody for the email).

Place the chocolate and butter in a saucepan over low heat and stir until melted and smooth. Pour the mixture into a bowl and add egg yolks, one at a time, beating until well combined. Set aside.Place the cream in a bowl ans whip until soft peaks form. Set aside.
Place the egg whites in a bowl ans whisk until soft peaks form. Sift over the icing sugar and whisk until the mixture is thick and glossy.Gently fold the cream through the chocolate mixture, then fold the egg whites through.
Spoon into bowls and refrigerate for at least 3 hours.

It was the first time (if my memories serves me right) that I saw a recipe including both egg whites and whipped cream as the lightening agent of the mousse and thought it would be overkill heavy with both egg yolks and heavy cream but it turned out rich but not "stick to your ribs my arteries are shrinking". I used 62% Lindt chocolate and topped it with an extra dollop of whipped cream and some cocoa nibs. Delicious! 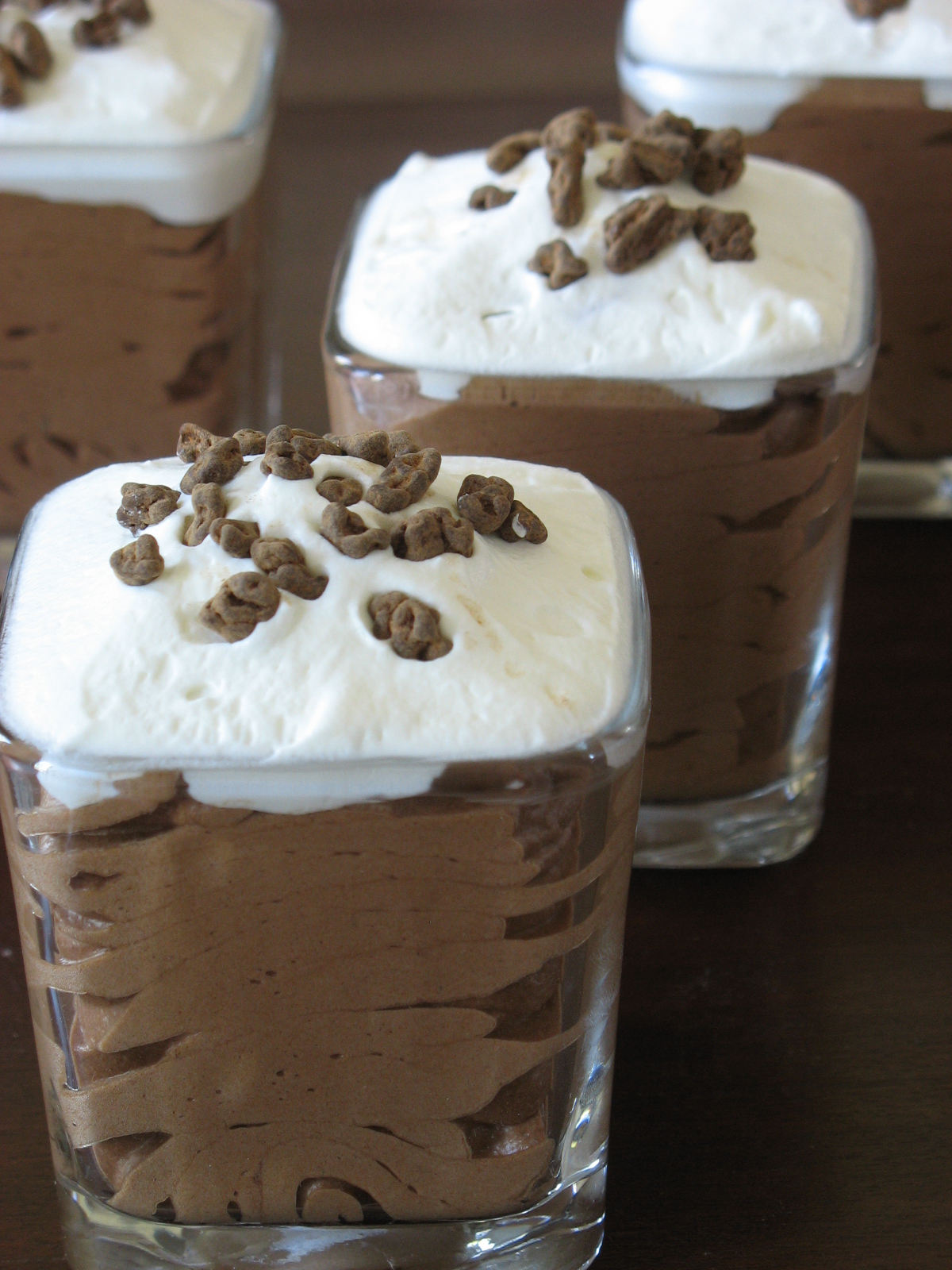 Update: in an attempt to explain my mousse making thoughts, it seems that my English was not clear enough. I have always made mousse including egg yolks and whipped egg whites. I have sometimes gone the easier way by combining melted chocolate and whipped cream. What I meant is that I have never combined the three in one recipe. 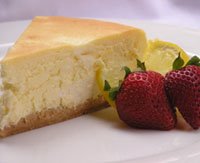 Sugar High Friday #43: Citrus! The Round Up Part One 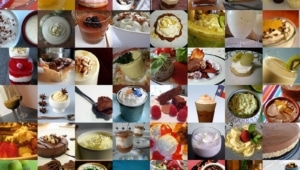 We Have A Winner !

Oh yum yum yum!! This does look really gorgeous. I love the glasses and I soooo love the layered effect you have achieved with the mousse. Did you use a piping bag?

Right on, this is completely tantalizing! You may have yet convinced me to whip up a mousse this weekend.

I have the same question as meeta – how did you get the layered effect? They look so beautiful! YUM!!

Yummy!
Not only does the mousse look great, but that is such cute glassware too.

I know. I KNOW. I’m still stressing over which delicious flavor to make! Oh! And I need cool cups/bowls/vessels!! Acckkk!

Meeta and Deborah: Yes, I did use a piping bag, fitted with a star tip. I had planned to leave them like them, but decided on a whipped cream hat at the last minute.

Lis: get your butt to it…I’d better see you there!

Ashley: I hope you get to participate!

Hi Helen! Breathtaking – I love that the mousse is so thick that you can see the piping details still!

I’m working on it…mine will probably go up Tuesday.
I can’t believe you have never made chocolate mousse without egg yolks…hmmm. I have never made it any other way.
Excellent job…looks so creamy and luscious.

Gilly: thank you! they were really tasty.

Peabody: I have always made mousse including egg yolks and whipped egg whites. I have sometimes gone the easier way by combining melted chocolate and whipped cream. What I meant is that I have never combined the three in one recipe.

Wow, Helene! What a beautiful way to present the mousse, you’ve taken it to a totally different level, my friend!

It looks terrific. Now I’m even more scared to participate. I’ve been having trouble choosing the recipe! 😀

Fantastic presentation.great looking stuff.It would be difficult for anyone to resist this.

Oh this looks so incredibly good. You really have set the standard. I am hitting the kitchen tomorrow with my entry.

Helene, this is beautiful!! I don’t know how I will be able to compete now..you have pushed the bar way up there..

Delicious looking and sounding. Chocolate mousse is such a classic and it looks like using yolks, whites, and creme worked well for you.

Hi,
Just stopping by and those layers caught my eyes. Look so beautiful

Beautiful mousse – I love your glasses, the presentation is so elegant!

Home » Blog » Get Your Mousse On ! Donna’s Dark Chocolate Mousse