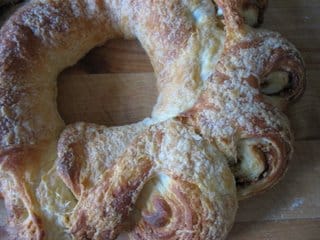 I had been eyeing a certain coffee cake recipe for a few days and something prompted me to make it last night and bake it this morning. Tuesday is an early day for B. so I figured I had plenty of time to bake at least one in time for his breakfast. The coffee cake was waiting for its fate in the fridge where it had plenty of time to rest and rise overnight and its sight filled me with promise of warmth and comfort this early in the morning.

I looked at the river through the back window and turned around….then I stopped dead in my tracks and had to do a double take…SNOW! It was snowing! Now! in November! In South Carolina! Did the world go upside down overnight? I mean, last week we were in shorts and t-shirts and a little while ago I was complaining about our lack of Fall weather! The weather people called it a "Freak Storm". I called it "Perfect for Coffee Cake". We sat there, at the dining room table, mugs smoking hot with coffee, looking at the snow (big slushy flakes that don’t stay on the ground but nevertheless…snow), and devouring our breakfast.

I completely understand Yvonne when she jokingly wondered if it was bad to eat one by yourself. Bad? No. Wise, absolutely not! Good? The Bomb!
The only changes I made to the recipe were to spread each dough with 1/4 cup cream cheese and sprinkle 1/4 cup broken praline over each before rolling them, instead of using the almond filling. It smelled so good that we skipped the icing, we could not wait!

In a bowl, mix together the warm water, yeast and 1 tbsp. of the sugar. Stir to dissolve and let sit for 5 to 10 minutes or until the mixture begins to look creamy and foamy.
Add the other 3 tbsp. of sugar, the salt, the egg and the cream. Combine well.
Pour the mixture in to the bowl of an electric mixer and add 1-1/2 cups of the flour. With the dough hook, mix on low speed until smooth (a few minutes).
Add the remaining flour and mix on low speed until the dough is well mixed. It will be a bit stiff.
Flour a work surface and turn the dough out. Roll the dough to a thickness of a 1/4 inch. Spread the softened butter on two-thirds of the dough.
With a knife, mark the dough into thirds by place a tiny mark at the top edge of the dough. Fold 1/3 of the dough over the middle third. Take the last third of the dough and fold it over that.
Do a quarter turn and roll the dough out again to 1/4 of an inch thick. Once again, fold the dough into thirds. Wrap in plastic wrap and refrigerate for 30 minutes. Repeat the rolling, folding and quarter turn three more times, refrigerating the dough for 30 minutes between each time. Once you’ve completed these steps, keep the dough in the refrigerator until you’re ready to fill it and bake the coffee cakes.

In a blender or food processor, grind the almonds with half the sugar. The almonds should be finely ground, but not pasty.
Add the rest of the sugar, the breadcrumbs, the 2 tbsp. melted butter, the egg, the extracts and the cinnamon. Combine well and set aside.

To assemble the coffee cakes:

Preheat the oven to 350 degrees F.
Remove the dough from the refrigerator and divide in half.
Roll each half into a rectangle that’s roughly 9 inches long by 6 or 7 inches wide.
Take the 1/4 cup of melted butter and brush the surface of the dough with some of the butter.
Spread half the filling over the first rectangle of dough. Be sure to leave a 1 to 1-1/2 inch border all the way around to avoid the filling leaking out.
Beginning with the top edge, roll the rectangle towards you to form a long roll. Join the ends of the roll to form a ring. You may want to wet the ends slightly to ensure that they stick together.
Transfer the ring to a cookie sheet lined with parchment paper. With a knife or with scissors, cut the ring of dough into slices that are about 1 inch thick. Don’t cut all the way through, but cut almost to the centre of the ring. Turn the pieces of cut dough slightly upwards so that you create a fan effect.
Cover the dough with a towel and let it rise for 30 minutes. Repeat with the other rectangle of dough.
Bake the coffee cakes for 30 minutes. Cool completely on a wire rack before glazing.

Mix all the ingredients until you have a smooth glaze. Drizzle the glaze over the cooled coffee cakes and let set (about an hour or so).
If the glaze is too thick, add more cream until you achieve the consistency you want. 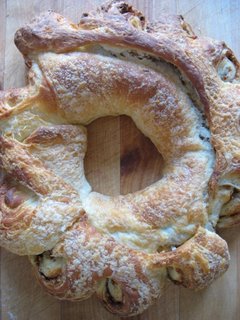 Glad you got your baking weather…we have it all the time here 🙂
Looks devine, I am afraid to make it as my diet has already been crappy lately. Not sure I can deal with the temptation.

My grandmother makes a mean sour cream cake, and honestly, every time I say I’m going to try a new kind of cake, I go back to that recipe. It’s so good. But, the shape of yours looks so unique here…I really think I might try this out! Impressive.

Wow.. that’s the prettiest coffee cake I’ve ever seen! It looks like a wreath! 😀 I love your choice of filling too Mmmm cream cheese and praline Mmmmm 😀

I’ve been wanting to make this too! Ever since I saw the yeasted coffee breads at Cream Puffs I’ve wanted to give them a try.

The coffee cake looks beautiful Helene !
Talk about freak weather right, heard about the snow in Charleston, how weird is that, did catch some snow driving up to Georgetown, would be nice to wrap my fingers around a mug of warm coffee and a slice of this yummy looking cake!

I have been eyeing that coffee cake too! Now that you’ve made it too my mouth is really watering… what a wonderful way to start our Thanksgiving day! mmmmm….

Helene, I can’t get the link to paste in, but the recipe is in my Archives:

October "Speaking of Dessert". Have at it!!

My guy and I are going to make your coffee cake this weekend, it hasn’t snowed here yet, but this might be the kind of food karma that brings it on. No matter, we’ll obviously be well fed!

You can’t see me but I am wiping up the drool off my mouth! It looks gorgeous and I love that you added cream cheese. I will have to try that the next time.

And what did I tell you about eating one all on your own … see how easy it is!

Thanks for the sweet words, Helene!