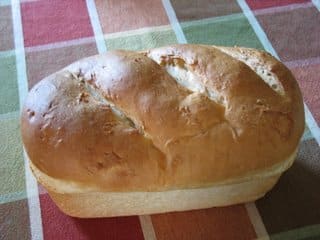 A few weeks ago, Cream Puffs referenced Mrs. B’s upcoming book release and her need for more recipes testers. I hurried over to her site to see if there were some recipes left to be tested as I wanted to be part of this great recipe book journey. I feel proud and honored that she agreed to have me test her recipe for Coconut Bread, or rather Mama Rose’s recipe.

Here is the recipe and then my comments and doings:

Instead of measurement, Mama Roses composes her dough using common sense; if it’s too sticky she adds more flour, if she happens to have extra coconut she’ll throw it in. I, on the other hand, improvise on a fixed recipe that is more or less the base of how I have seen Mama Rose mix her bread.
¾ cup coconut water or water
1 tablespoon instant yeast
1 ½ cups coconut milk
3 tablespoons melted butter or oil
3 tablespoons sugar
1 tablespoon salt
a handful or more grated coconut
6 to 6 ½ cups plain flour

In a large bowl add the instant yeast to the coconut water then add the rest of the liquid ingredients, the sugar and the salt.
With a wooden spoon, mix in about1 cup of the flour then add the grated coconut before slowly mixing in the next 4 1/2 cups of the flour 1/2cup at a time; you’ll probably need to abandon the spoon and use your hands after the 4th of 5th cup of flour. Turn the dough onto a lightly floured work surface and knead it while slowly adding the remaining flour as needed to prevent the dough from becoming too sticky. Continue to knead the dough till it is smooth and springy, about 5 minutes.
Place the dough in a lightly greased mixing bowl and let rise in a draft free place (a flash heated ovenworks great for this) till it has doubled in bulk, about 1 ½ to 2 hours. Deflate the dough and roll it to fit into two buttered loaf pans. Let the dough rise in the pans until the dough has doubled in bulk again, about 45 minutes. About 25 minutes into the second rise, heat the oven to 375 degrees. Slash a groove about ¼ inch deep, vertically down the tops of the loaves before placing them on the center rack of the oven. Bake for about 40 to 45 minutes or until the loaves are a golden brown.Allow to cool at least 10 minutes before slicing.

I did the loaves twice. The first time I went and got 2 coconuts and pierced them to get the water out, and used that instead of regular water, but it was a lot of coconut left over for such an amount needed in the recipe.
The second time I used the same amount but used coconut milk instead, as well as the other installment of coconut milk.
The coconut flavor was not quite as strong in the first batch, but both times the texture of the bread was incredible. I had to stop myself from eating th whole thing fresh out of the oven. It was close and as good as a brioche but with less butter involved.
Because of circulation problems in my hands lately I did the first batch using my Kitchen Aid and letting it do the job.
The second time I wanted to see how the bread dough would perform in a bread machine and put all the ingredients in my bread machine and set it on the dough program (2 hours) and took it out, separated it into 2 and let it rise another 45 minutes. Worked just as good , though a little longer of a process.
This bread is definitely a winner!

Oh I love coconut bread. There is a great tea shop here that serve it toasted with some butter and it’s divine.
Yummy! I think I will try this recipe, thanks!

Your are welcome. We had it toasted and topped with poached eggs this morning and it was great!

Helen, thank you so much for testing this recipe. My sister in law also made it and thought it was the best bread she had ever made, although she was expecting more coconut flavor. She was going to try a second time as well, using more shaved coconut. I do think the recipe is a winner though and the story that goes with it is absolutely wonderful. Expect a copy of the book in August. Not just compensation for your hard work, but I think you will find some wonderful stories and lots of good recipes to try.

Mrs. B: I am bad…I just made another 1/2 batch. I am dying to know the whole story.
Thank you for the book…baking and cooking is never hard work…:)