Cheesecake or Cinnamon Ice Cream? Both?! 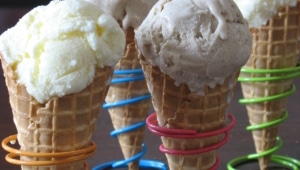 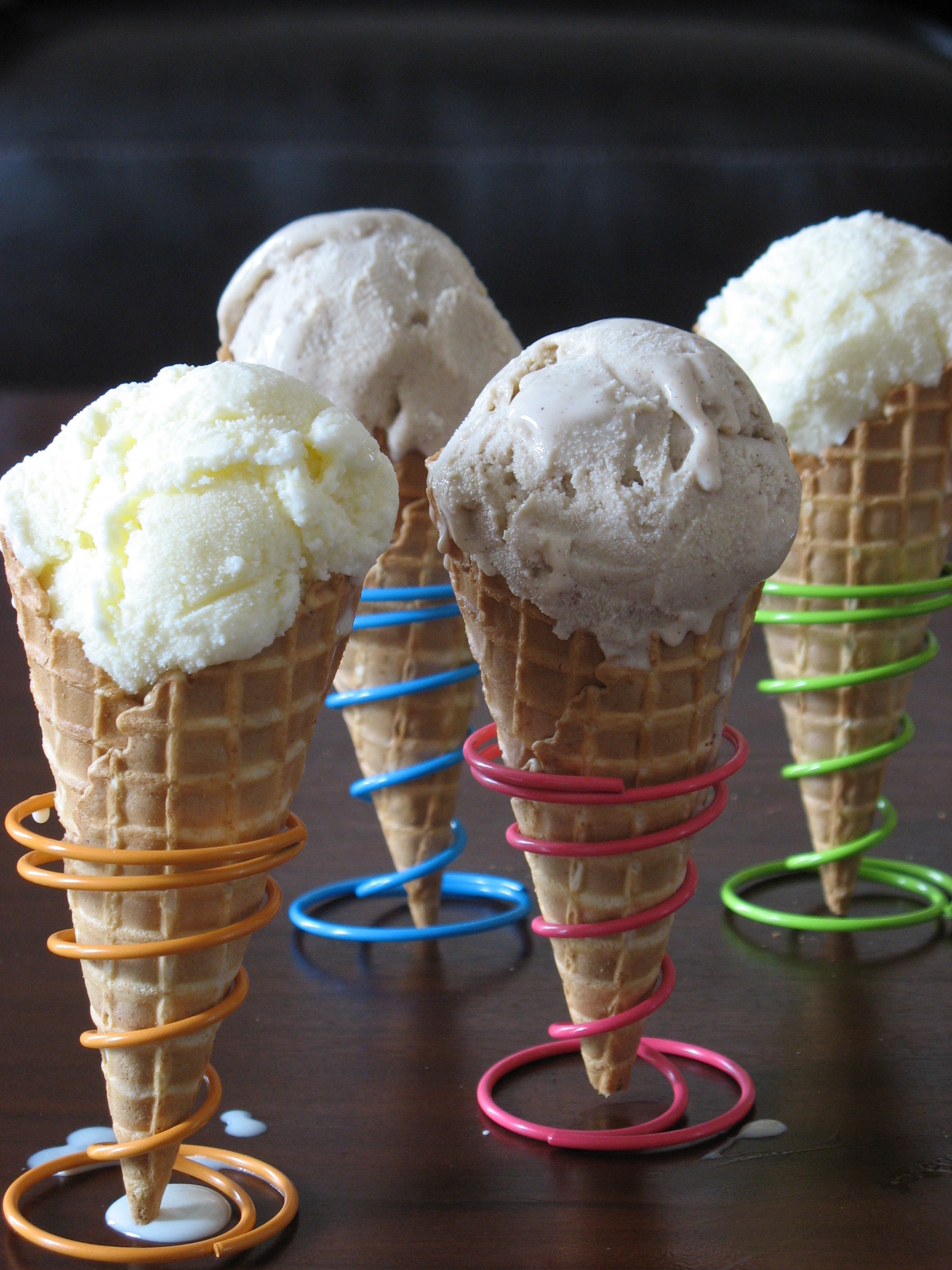 I don’t particularly enjoy ice cream drips on my coffee table, but by the time I shot some pictures and we finally decided what flavor we wanted, there were tiny ice cream puddles and lots of slurping, licking and "humhumhums" heard around. Both ice creams are good together, both are good on their own and both are better shared with friends.
In my case, I liked them equally (a lot) and I played around having small scoops of both in a bowl. I even drizzled dulce de leche on one of them, then both…Thanks Marce for the bottle!

How I came to make the cheesecake ice cream is actually quite funny, at least to me but I am easily amused. I started with the cinnamon to take to the neighbors for our weekly cookouts, but I wanted to bring another dessert in case some did not like it. I had my elbow on this cookbook and realized I had not made anything from it yet. My brother gave it to me when he came to visit last year and thought that bringing Alain Ducasse, chef of chefs, and Sophie Dudemaine, queen of cakes, into my kitchen would make me feel closer to home. And what do I do? I close my eyes, grab the recipe section with both hands and open the book on the only American inspired recipe, Cheesecake Ice Cream…ahahah!!! I took it as a sign that I was perfectly integrated in my life (sometimes homesick but who is not?) and happy in my shoes.

Both ice creams were equally loved and quickly disappeared. In the meantime I have nothing planned for dessert tonight but I have enough ice cream recipes to fill my stomach virtually: check out my fellow Daring Bakers' creations: mascarpone, chocolate, rhubarb…is your ice cream churning yet?

Whisk the egg yolks with the sugar.
In a saucepan set on medium heat, bring the milk and the cream to boiling point, slowly pour a small amount on the egg yolks to temper. Pour the remaining over the yolks and sugar. Stir well then pour back in the saucepan and cook over medium low heat until the cream thickens and coats the back of a wooden spoon. Remove from the heat and whisk in the cream cheese until completely melted and incorporated.
Cool to room temperature. Cover and refrigerate until cold. Process in an ice cream maker according to your machine’s manufacturer’s instruction.
Number of servings: if I apply the rules of reason and moderation, I would say 6…but if you want your friends happy, more like 4!

I use a counter top style ice cream machine as well as an hand held immersion blender when the former is already at work.

In a large bowl, whisk the egg yolks and sugar until pale and thick, add the vanilla.
In a saucepan, on medium heat, bring the half and half and cinnamon to boiling point but do not let it boil.
Slowly pour the hot cream onto the egg yolks mixture and stir to combine (tempering). Pour the whole mixture back into the saucepan and cook over low heat, stirring constantly, until the cream coats the back of spoon. At this point you have made a custard sauce, also known as "creme anglaise".
Let cool completely, strain and refrigerate until cold. Process the custard according to your ice cream maker manufacturer’s instructions or use a hand held immersion blender. 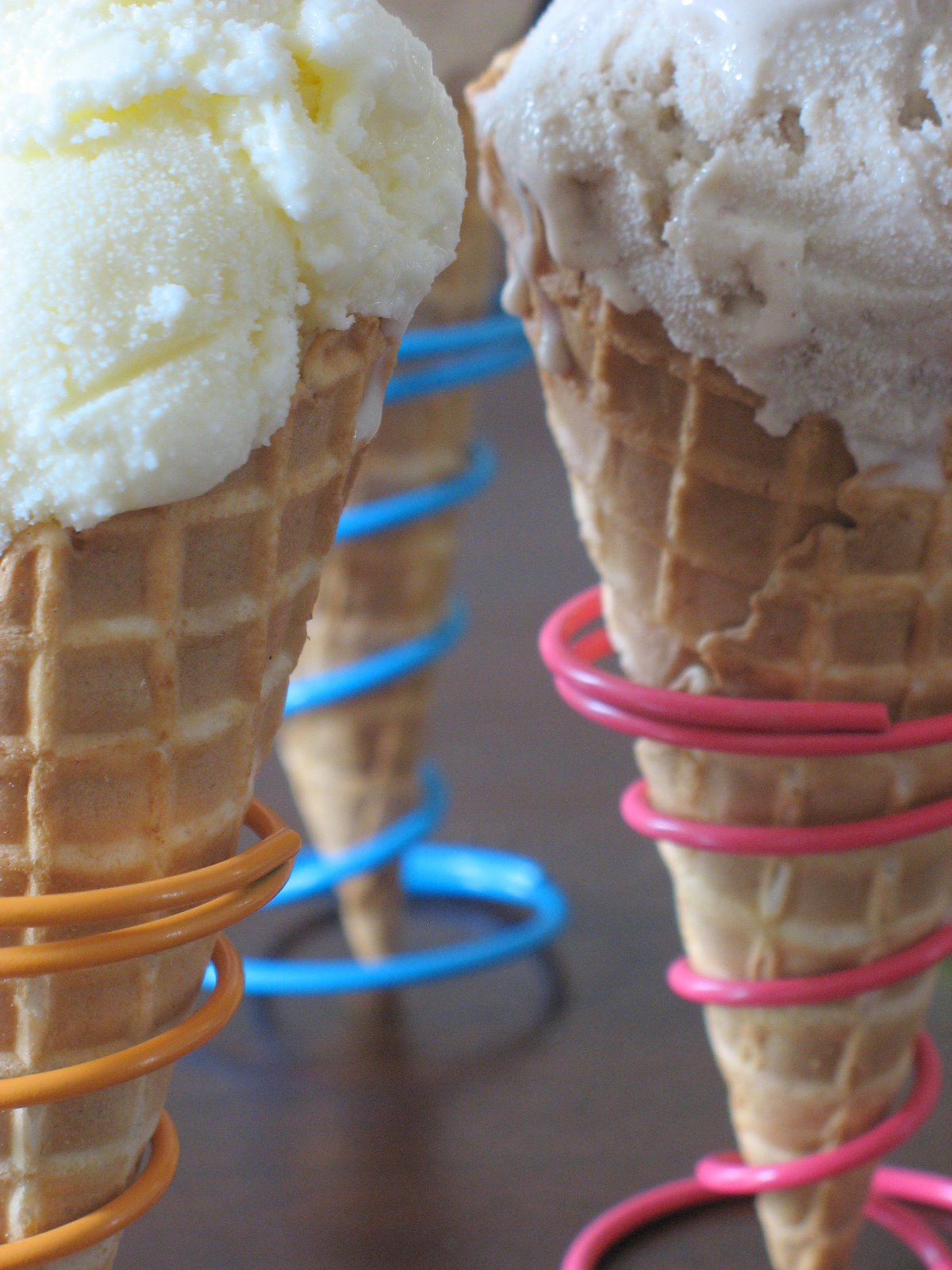 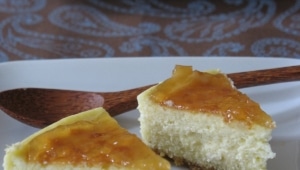 These ice cream cone holders are way too CUTE, and oh, I’m eating your ice cream with my eyes. Gosh do they look so finger licking good….. *slurp*…

You do know how very perfect
"perfectly integrated in my life (sometimes homesick but who is not?) and happy in my shoes."
sounds? It really makes me happy. Ahem, well maybe it’s some of that ice cream that’s making me happy also. And I know the ice cream cone holders are upping the happy factor!
I really enjoy how all your words knit together so many different elements in this write up!!

Sounds mucho yummy-o! I think I’d want to have a scoop of each.. cinnamon cheesecake. Mmmmm 😉

Oh my god, yum doesn’t even BEGIN to describe how these look! I’m with Lis, but I don’t think one scoop of each would be quite enough! Maybe one for now…and then more later 😉

Those ice cream holders are terrific – I really need to get my ice cream maker out!!

Oh yum! Cheesecake and ice cream. Two things near and dear to my heart!!!

It is freezing cold this morning in Mel but I know I can handle at least one of these. Dangerously delicious!

This is much too cute, I love ice cream especially in waffle cones. Delicious!

I’m dripping ice cream vicariously on my pajamas here…
YUM!!!
Did you say what kind of ice cream maker you use?
I am so tempted…

They both sound yummy, and those cone holders are fabulous!

I’ve got some custard cooling in the fridge to make my first recipe from The Perfect Scoop.

Time to get the ice cream machine out! Only waiting for some more sunshine around here! Looks delicious, with the drips too!

gosh i hate u for having an ice cream maker … ! with our tiny kitchens here i can only dream of owning one ! thank god for Haagen Dazs… every time i see an ice cream on your blog i end up buying myself a tub frm there !

The cinnamon ice cream is calling my name, Helen!

I adore cheesecake ice cream! I like chunks of it in the ice cream.