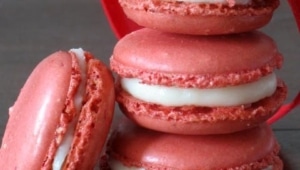 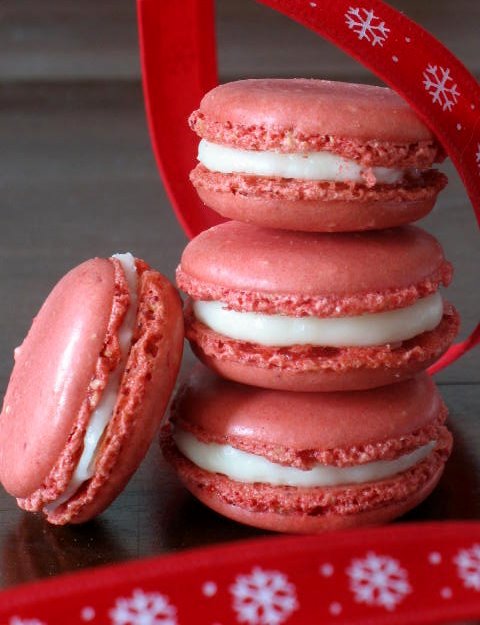 Yes well, who said that macarons had to be 100% almond based? Not the pastry shops selling pistachio ones! Necessity is the mother of invention and that proved to be especially true last weekend when these little peanut macarons with a cream cheese buttercream and crystallized ginger center came out of my kitchen.

I had just finished an order for deep red and deep green holiday inspired macarons with traditional fillings and almond shells when I found an extra bowl of buttercream in the fridge, and plenty of ripe egg whites. Since I was on the macaron making train, I decided to make one more batch for us and the neighbors. When I went to weigh the almonds, I had half of what I needed…darn…out of pistachios too and the walnuts were going in cookies…but eh! Peanuts were sitting quiet and pretty on the pantry shelf so why not?! What do I have to lose? Flat macarons, sticky macarons, cracked macarons? Not a problem! They could always find their destiny in ice cream!

Really, what would be the big deal by replacing half the almonds with half peanuts? Peanuts are more oily than almonds but there would only be half the amount in the batter, not enough to make a big difference. I should be ok…and might as well pray too. A conversation with Veronica reinforced my belief things could get pretty tasty. I don’t want to be stuck with eating macaron shells. Remember I am the one who loves making them but not that much eating them. Now is my time to fess up: I have already had six. That little surprise of ginger inside combined with the peanut taste and not too sweet filling is just sinful.

Another issue that afternoon was that I was running out of powdered red color so I knew these would not be as red as Christmas inspired ones. Oh well, there will just be as tasty, especially with the cream cheese buttercream filling, which is nothing more than a basic cream cheese frosting but a little less sweet. The crystallized ginger piece in the middle is completely borrowed from Karen’s fabulous macarons creations which you can go admire on her blog Mad Baker. Go check them out, I’ll wait….

You’re back? Then let me give you the recipe for these: 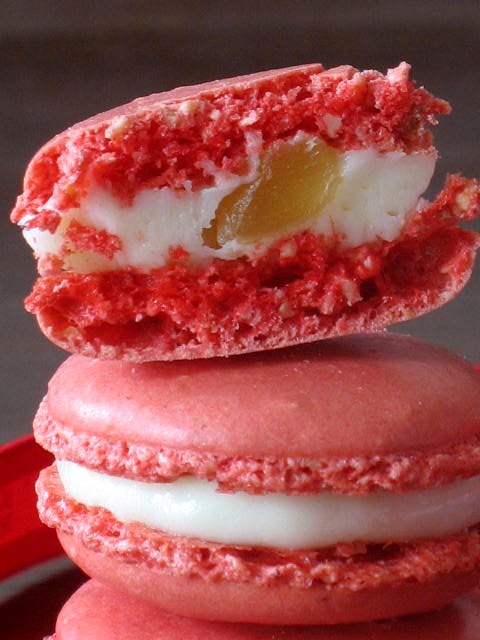 In a food processor, run the nuts and powdered sugar until the nuts are finely ground. Run through a sieve if needed.
Whip the egg whites until foamy, slowly add the granulated sugar, until they are glossy. Add the red food coloring.
Slowly fold the nut/sugar mixture into the whites with a wide spatula. The mixture should remain shiny and flow easily.
Fill a pastry bag with the batter and pipe small rounds onto parchment lined baking sheets.
Let the macarons rest for 20 minutes.
Preheat the oven to 315 and when they are ready, bake them for 12-15 minutes.
Let cool, remove from the paper and fill with the buttercream, add a piece of ginger and top with another macaron shell.

With a stand mixer and the paddle attachment, beat the cream cheese and butter until fluffy. Add the powdered sugar, give it one more whirl to incorporate everything. Fill a pastry bag with the mixture and fill the macaron shells. 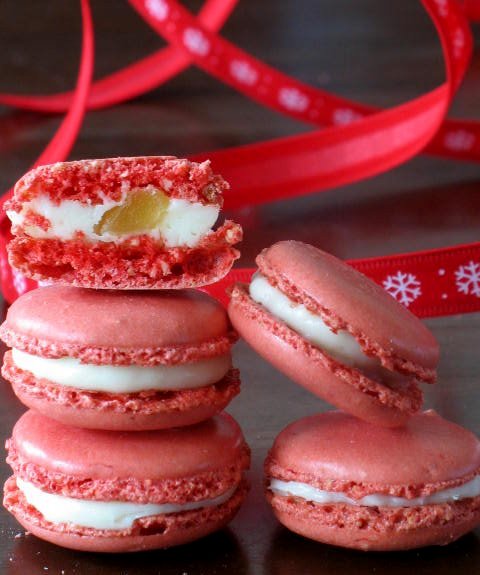